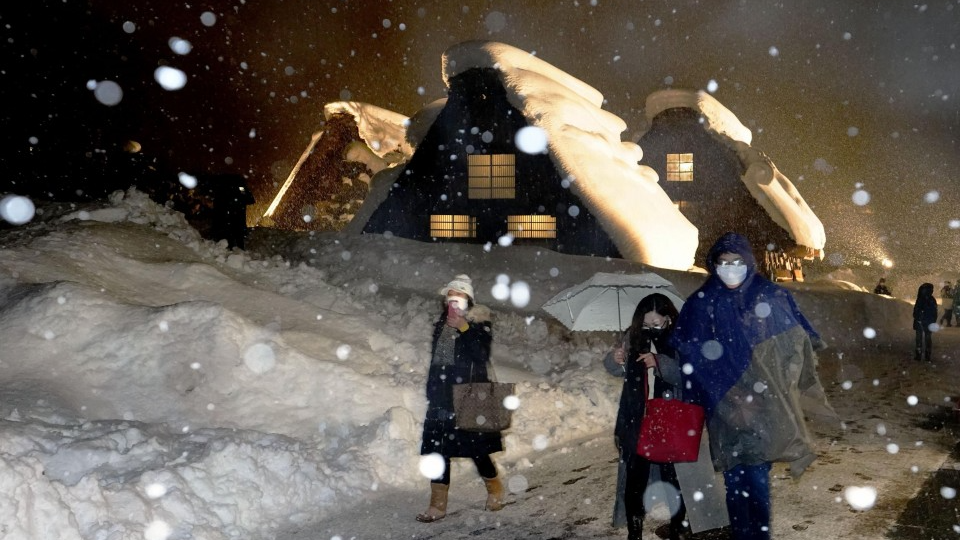 Visitors walk past thatched farmhouses in the hamlet of Shirakawa-go as the World Heritage site is lit up in the Gifu Prefecture village of Shirakawa, central Japan, on Jan. 16, 2022. (Kyodo) ==Kyodo

TOKYO - The Japanese government is nearing a decision to declare a quasi-state of emergency for Tokyo and three nearby prefectures amid a rapid increase in the number of novel coronavirus cases in the region, a government source said Monday.

The governors of Tokyo, Saitama, Chiba and Kanagawa decided at a virtual meeting to jointly ask for quasi-emergency measures to be applied to their prefectures, as Japan is in the midst of a sixth wave of the COVID-19 pandemic due to the highly transmissible Omicron strain.

TOKYO - Prime Minister Fumio Kishida said Monday he will devote himself to containing COVID-19 in Japan amid surging cases fueled by the Omicron variant, asking for public cooperation to win the battle against the virus that is proving more "formidable" than expected.

In his first policy speech at the start of a 150-day regular Diet session, Kishida sought to assuage public concerns about the highly transmissible Omicron variant by promising to roll out booster shots faster, vaccinate young children and make necessary treatment and health care services available for those with severe symptoms even when cases jump further.

The projectiles were fired in an easterly direction from the Sunan Airport area in Pyongyang shortly before 9 a.m., the Joint Chiefs of Staff said, adding they traveled about 380 kilometers and reached an altitude of around 42 km.

TOKYO - Japan plans to allow 87 government-sponsored foreign students into the country, making an exception to the country's entry ban on nonresident foreigners that is currently in place amid the COVID-19 pandemic, the top spokesman said Monday.

Entry of the students will be allowed possibly from later this month and they will be required to quarantine for 10 days after arrival at hotels prepared by their schools, government sources said.

BEIJING - China's economy grew 8.1 percent in 2021 from a year earlier with exports recuperating from the coronavirus shock, registering the sharpest expansion in 10 years, government data showed Monday, but the future of the nation's domestic demand is not necessarily bright.

The pace of economic growth was much faster than the 2.2 percent expansion in 2020, underscoring that consumer and corporate confidence has been recovering in the Asian country, which has effectively brought the virus under control.

BEIJING - The birth rate in mainland China slipped to a record low in 2021, government data showed Monday, despite efforts by the Chinese government to prevent the country's population from aging further.

TOKYO - Shinji Mizushima, a famed baseball-themed manga artist known for such works as "Dokaben" and "Abu-san," died of pneumonia on Jan. 10, his management office said Monday. He was 82.

A native of the city of Niigata on the Sea of Japan coast, Mizushima debuted as a cartoonist in 1958 when he was 18. He gained popularity after he published a baseball series in 1970.

BEIJING - A freight train arrived at the North Korean town of Sinuiju from the Chinese border city of Dandong on Monday, a source close to the matter said, adding that traffic operations between the two countries are likely to resume on a daily basis.

The cargo train had made the journey from Sinuiju to Dandong on Sunday morning and was loaded with goods such as daily necessities including food before it returned to North Korea.