Japan is considering placing 11 prefectures, including Tokyo and its vicinity, under a COVID-19 quasi-state of emergency to curb rapidly spreading coronavirus cases, government sources said Monday.

Any declaration of a quasi-emergency hinges on requests made by these prefectures, but the Japanese government is preparing to make a decision as early as Wednesday, the sources said as the highly transmissible Omicron strain continues to spread.

If declared, Japan would see 14 of its 47 prefectures under the antivirus measure, reinforcing the view that the nation is experiencing what health experts describe as its sixth wave of the pandemic.

The possible declaration will likely be effective for around three weeks from Friday, one of the sources said.

Tokyo and neighboring Chiba, Saitama and Kanagawa prefectures jointly asked the central government to put them under a quasi-emergency after their governors held a virtual meeting to discuss the infection situation in the Tokyo metropolitan area.

Gifu and Mie prefectures in central Japan also made a request as they too seek to prevent hospitals from being overwhelmed by a spike in COVID-19 cases. Their neighbor Aichi is expected to follow suit.

The remaining prefectures are Niigata on the Sea of Japan coast as well as Kumamoto, Miyazaki and Nagasaki in the southwest, the national and local government sources said.

Under a quasi-emergency, local governors can request that dining establishments shorten their business hours and stop serving alcohol. Residents in these areas would also be asked to refrain from traveling across prefectural borders. 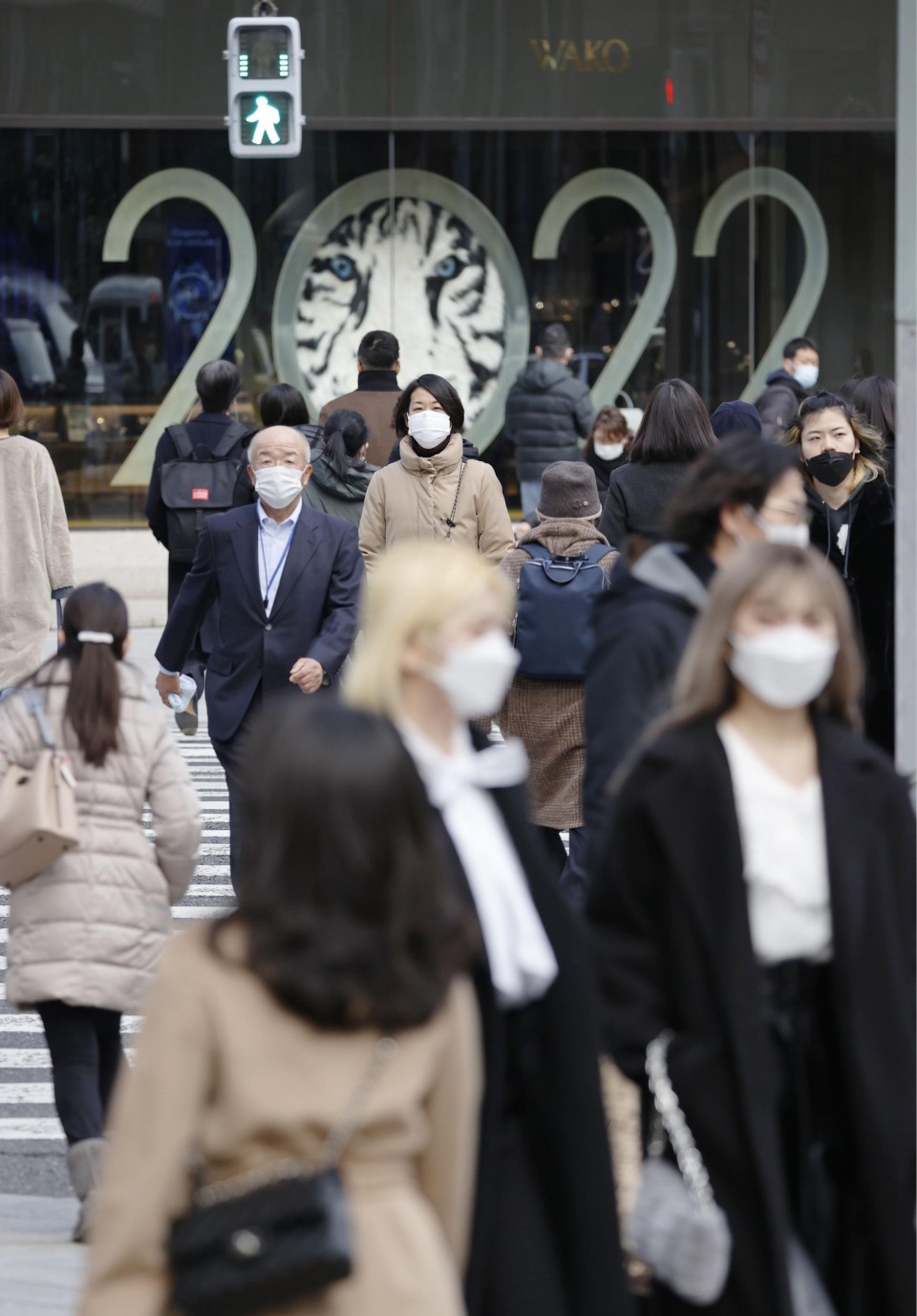 People wearing masks for protection against the coronavirus walk in Tokyo's Ginza area on Jan. 17, 2022. Tokyo and its three neighboring prefectures agreed the same day to jointly ask the central government to place the area under a quasi-state of emergency in an attempt to curb surging COVID-19 cases. (Kyodo) ==Kyodo

Tokyo's daily count of coronavirus cases came to 3,719 on Monday, after topping 4,000 on Friday for the first time since late August.

Nationwide, the number of newly confirmed coronavirus cases exceeded 20,000 for the fourth straight day, with community transmissions of Omicron accelerating in urban areas including Tokyo, Aichi, and Osaka.

In the Kansai region in western Japan, Osaka Gov. Hirofumi Yoshimura said he plans to consult with the governors of neighboring Kyoto and Hyogo regarding whether to ask for quasi-emergency steps.

Chief Cabinet Secretary Hirokazu Matsuno said the number of new cases "is surging at an unprecedented speed, not just in the metropolitan area but elsewhere too."

In a regular news conference, Matsuno said that health experts have noted the need to consider making a declaration based on wider economic regions rather than prefectures, and he suggested taking such a stance for Tokyo and Osaka and their vicinities.

Amid the resurgence of the virus across the country, a quasi-state of emergency has been already declared in Okinawa, Yamaguchi and Hiroshima prefectures, effective from Jan. 9 through the end of the month.

Prime Minister Fumio Kishida told a ruling party meeting Monday that the government will "need to implement restrictions on people's movement" if the existing antivirus measures cannot curb the spread of the virus.

To counter the resurgence of COVID-19, the government is now planning to reopen a mass vaccination center in Tokyo on Jan. 31 using a government facility in Chiyoda Ward, the venue of a vaccination program last year, according to a government source.

Kishida announced last week centers operated by the Self-Defense Forces in Tokyo and Osaka would be reopened to speed up giving booster shots to people.

The Defense Ministry is set to decide on the schedule for administering third shots to those aged 18 or older as early as Tuesday.