China's economy grew 8.1 percent in 2021 from a year earlier with exports recuperating from the coronavirus shock, registering the sharpest expansion in 10 years, government data showed Monday, but the future of the nation's domestic demand is not necessarily bright.

The pace of economic growth was much faster than the 2.2 percent expansion in 2020, underscoring that consumer and corporate confidence has been recovering in the Asian country, which has effectively brought the virus under control.

In the October-December period of 2021 alone, however, the world's second-biggest economy edged up only 4.0 percent, as the outlook has become gloomier due largely to fears about another wave of infections and potential financial market turmoil.

The National Bureau of Statistics said China "sustained the continuous and steady recovery of the national economy and maintained the leading position in economic growth" in the world in 2021, but it voiced wariness about the forecasts.

"We must be aware that the external environment is more complicated and uncertain, and the domestic economy is under the triple pressure of demand contraction, supply shock and weakening expectations," it said.

Since the increase in novel coronavirus infections apparently peaked in late February 2020, China, dubbed the "world's factory," has shown signs of a V-shaped economic recovery with business activities intensifying and private spending bouncing back.

China was the only major economy to attain growth in 2020. The 8.1 percent expansion in 2021 also surpassed the Communist-led government's target for an annual gross domestic product growth at "over 6 percent" for that year. 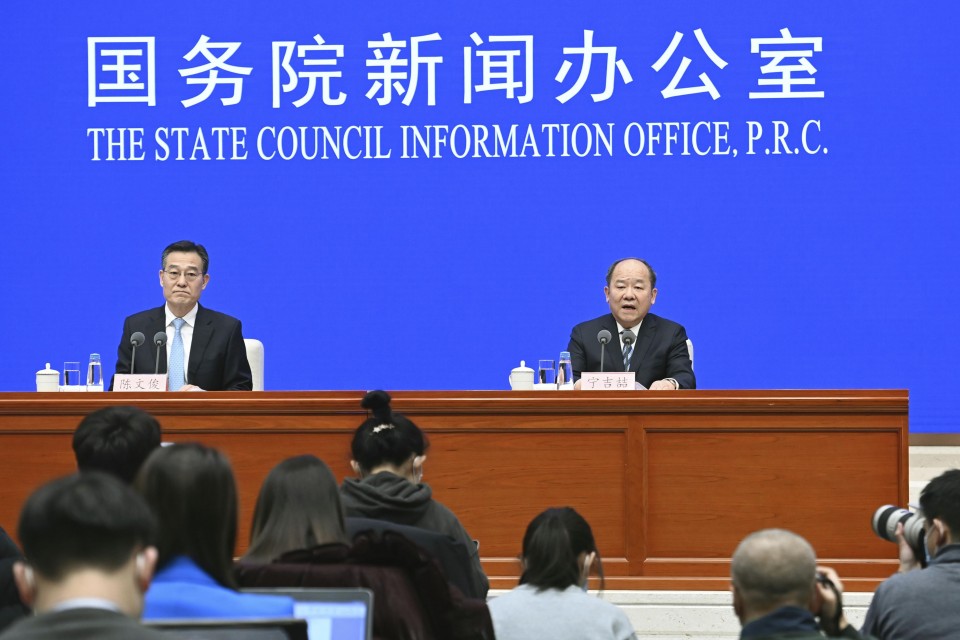 The trade surplus with the United States, which has been at loggerheads with China over several issues such as its alleged human rights abuses in Xinjiang and security challenges to self-ruled democratic Taiwan, soared 25.1 percent to $396.6 billion from 2020.

The average unemployment rate in urban areas was 5.1 percent in 2021, better than the previous year's 5.6 percent.

Prospects for China's economy are expected to hinge on whether the government can curb the latest outbreak ahead of the Beijing Winter Olympics, slated to begin Feb. 4, and how to deal with mounting worries about debt woes in the nation's property sector.

The number of new infections has been rising in the mainland in recent months despite the Communist Party's radical "zero corona" policy aimed at stemming the spread of the virus, first detected in the central city of Wuhan in late 2019.

In Xi'an, more than 2,000 people have been infected with the virus since early December, and municipal authorities have locked down China's central city of 13 million since the middle of the month.

Meanwhile, Tianjin, a 14 million population city known as a key gateway to Beijing, has carried out citywide COVID-19 nucleic acid testing since earlier this month, after community infections with the highly contagious Omicron variant were confirmed.

The Beijing municipal government said Saturday that it has found its first case of the Omicron variant.

If strong restrictions by the leadership of President Xi Jinping, who has been keen to host the Beijing Olympics in a complete form, remain in place, private consumption and investment would lose momentum, analysts say.

Concern also lingers that a possible bankruptcy of property developer China Evergrande Group could cause the resurgence of a global financial crisis comparable to the 2008 meltdown triggered by the collapse of U.S. securities company Lehman Brothers Holdings Inc.

Evergrande and other Chinese property firms have expanded their business while the real estate market in the country has been languishing in the aftermath of the coronavirus pandemic.

In China, severe regulations on energy consumption, as well as a hike in coal prices, have also eroded corporate performance, with the government of the world's biggest CO2 emitter pledging to achieve peak carbon emissions by 2030.