Prime Minister Fumio Kishida said Monday he will devote himself to containing COVID-19 in Japan amid surging cases fueled by the Omicron variant, asking for public cooperation to win the battle against the virus that is proving more "formidable" than expected.

In his first policy speech at the start of a 150-day regular Diet session, Kishida sought to assuage public concerns about the highly transmissible Omicron variant by promising to roll out booster shots faster, vaccinate young children and make necessary treatment and health care services available for those with severe symptoms even when cases jump further. 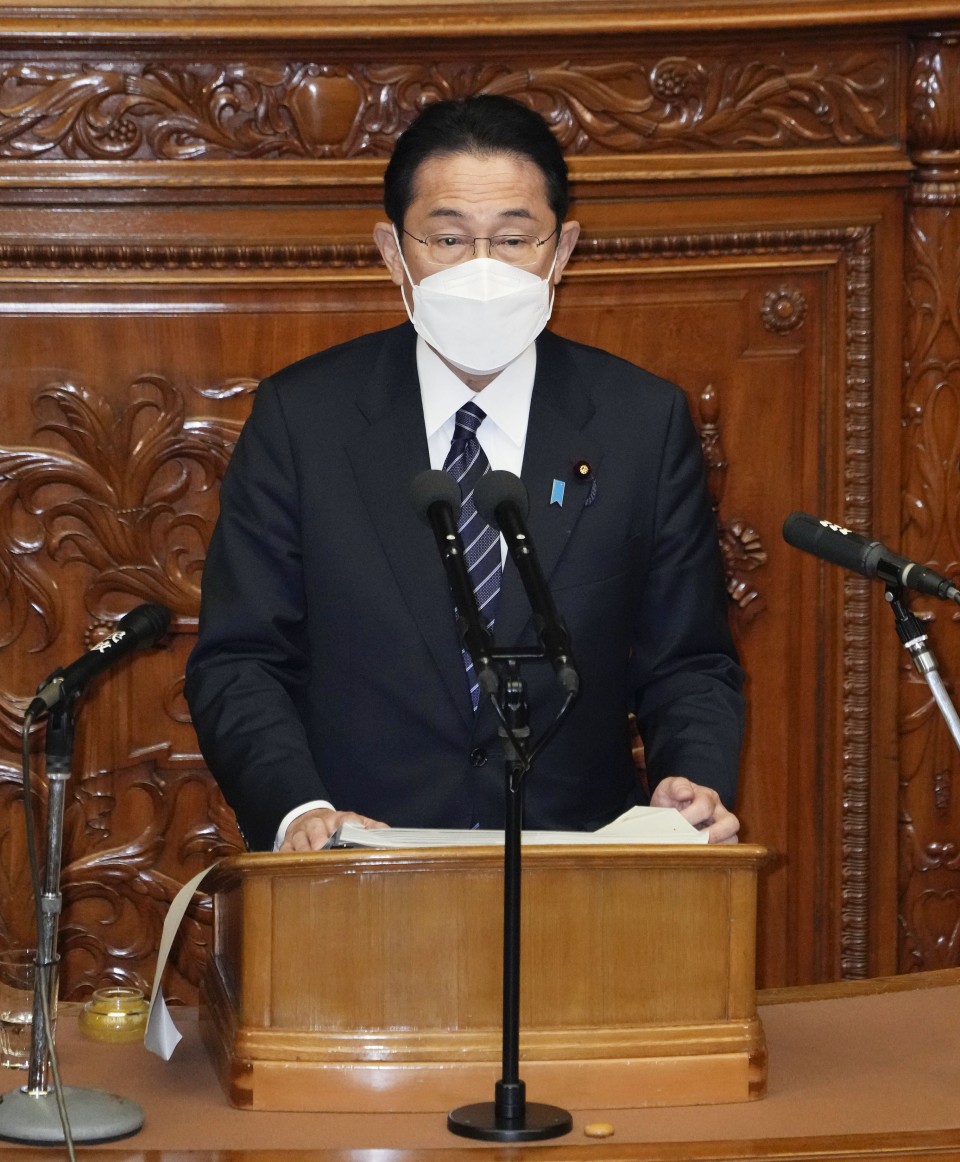 Beyond COVID-19, Kishida set his sights on achieving carbon neutrality as a growth driver for Japan and unveiled a plan to create an Asia-wide "zero-emission community." In his push for a new form of capitalism, he stressed the importance of wealth distribution, especially through aggressive pay hikes by businesses as wage growth remains tepid.

The roughly 40-minute policy speech laid out what Kishida, who took office in October, will focus on during the regular Diet session, a critical period before an upper house election this summer when his skills to deliver will be tested. For now, he enjoys solid support but Omicron is posing a new challenge.

"I myself have heard Japanese people saying 'Not again. Can't take it anymore.' But we have to be mindful that the invisible enemy is much more formidable than has been anticipated," Kishida told parliament.

"Once again, I ask for your cooperation. Let us overcome this national crisis," the 64-year-old leader said.

Japan has seen a recent downtrend in COVID-19 cases go into reverse as community transmissions of Omicron have been confirmed. Health experts have pointed out the tendency among many patients to show no or mild symptoms despite the highly transmissible nature of the variant.

The government has already decided to shorten the interval between the second and third vaccine shots by one month to seven for those between 18 and 64 and to six for those over 64. The isolation period for close contacts was also cut to 10 days from 14.

Still, the strict border controls, including an entry ban on nonresident foreign nationals, that have allowed the nation to keep the inflow of Omicron "to a minimum" will be in place until the end of February as Japan bolsters its domestic anti-virus steps, Kishida said.

"We need to avoid an emergency situation in which the number of patients with severe symptoms spikes due to an unexpected surge in infections and hospital beds are scarce," he said.

During the parliamentary session, the government will seek early passage of a record 107.60 trillion yen ($940 billion) budget to support the ailing economy.

Finance Minister Shunichi Suzuki said in his speech that the fiscal 2022 budget is meant to prepare "all possible measures" to combat COVID-19. "We need to rebuild the economy and work toward fiscal rehabilitation," the minister said.

Bills to be deliberated on include those related to the launch of an agency dedicated to child and family policies and to protect sensitive technology, infrastructure and supply chains as part of safeguarding economic security interests -- Kishida's key policy items.

Tackling climate change is "the biggest challenge" in the pursuit of a new form of capitalism, Kishida told lawmakers in parliament. Japan has a goal to bring carbon dioxide emissions to net zero by 2050, in line with pledges by the United States and other nations.

"We will at least double investment (in efforts to realize a carbon-neutral society) as soon as possible and create an engine for achieving decarbonization and growth for a new era," he said.

To help decarbonize other Asian nations, Japan should utilize technology and expertise in the use of hydrogen and ammonia and create a "zero-emission community" by jointly establishing technological standards and infrastructure, the prime minister added.

On distribution, a pillar of the new capitalism push, he urged companies to raise pay and "reverse the recent trend of slowing wage growth" in "shunto" annual spring wage negotiations between management and labor unions. The talks this spring come as consumers are beginning to feel the pinch from higher energy and food prices. 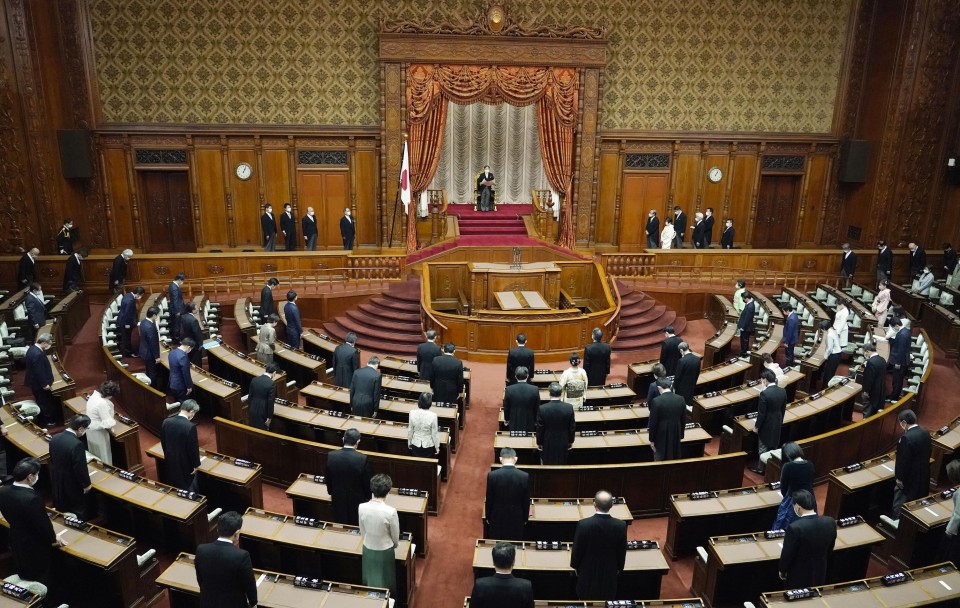 The opening ceremony of a 150-day regular parliament session is held in Tokyo on Jan. 17, 2022, with Japanese Emperor Naruhito attending. (Kyodo) ==Kyodo

High on his list for 2022 is increased summit diplomacy, an area in which he has yet to fully engage in despite his past experience as a foreign minister.

As a lawmaker elected from atomic-bombed Hiroshima, Kishida said he wants to create a new framework for dialogue among current and former political leaders from various countries and experts to realize a world free of nuclear weapons with its first meeting to be held in the western Japanese prefecture this year.

Kishida places importance on working with longtime ally the United States and other like-minded nations to tackle security challenges and protect universal values such as the rule of law and human rights.

In the speech, he reiterated his wish to hold summit talks with U.S. President Joe Biden at an early date to deepen the alliance. He gave up on visiting the United States for in-person talks with Biden before the start of the Diet session and a virtual meeting is now scheduled for Friday.

China continues to loom large as Japan, placed in a difficult position amid the rivalry between Washington and Beijing, needs to strike a delicate balance in its dealings with the important trading partner whose military build-up and assertive moves at sea are raising concerns.

"We will say what should be said to China and strongly urge the nation to behave in a responsible manner," Kishida said. "As we celebrate the 50th anniversary of the normalization of ties between Japan and China, we will aim to build a constructive and stable relationship."

Kishida took up the issue of the threats posed by North Korea and called the recent, repeated test-firings of ballistic missiles "utterly unacceptable." But he left the door open for summit talks with leader Kim Jong Un, as was the case with his recent predecessors, to comprehensively resolve the nuclear and missile issues and Pyongyang's past abductions of Japanese nationals.