A U.S. Air Force F-35A fighter jet made what appeared to be an emergency landing at a base in Okinawa on Wednesday, only about a week after the U.S. military made its first ever deployment of the stealth aircraft in the Asia-Pacific region at the base.

The U.S. Air Force said the jet made a "precautionary landing" at the U.S. Kadena Air Base. But the Kadena town government said it was an "emergency landing," citing an observation by one of its officials who saw two fire trucks on standby either side of the runway when the landing was made. 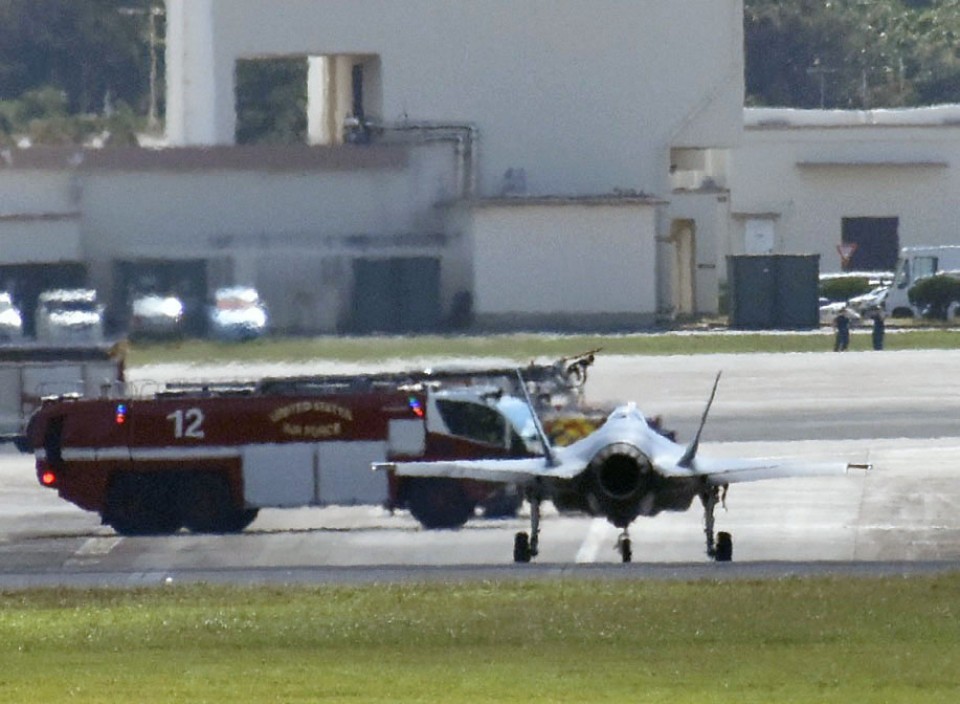 After decades of hosting the bulk of U.S. military facilities in Japan, many people in Okinawa are frustrated with noise, crime and accidents linked to the U.S. bases. Recently, safety concerns have been rekindled over a series of accidents involving U.S. Marines Osprey aircraft and a transport helicopter stationed in Okinawa.

According to the town of Kadena, multiple F-35As left the base from around 9:45 a.m., but one returned and made the landing around 10:40 a.m. Firefighters were seen checking the aircraft afterward.

The U.S. Air Force said it was a minor incident and "there was no appreciable risk of injury or property damage."

A dozen F-35As belonging to a U.S. Air Force base in Utah flew to the Kadena base from late October to early November for a six-month rotation, marking the first operational deployment of the aircraft to the Asia-Pacific region overseen by the U.S. Pacific Command.

The move has been seen as the latest show of force toward North Korea that has continued conducting nuclear tests and launching ballistic missiles, some of which have flown over Japan.

Trump said Japan should have shot down N. Korea missiles

On Tuesday, eight of the jets engaged in the first flight training after the deployment around Okinawa.

F-35s are equipped with high-performance radar that can detect ballistic missiles and are capable of evading radar detection.

The U.S. Marines' variant of the F-35, known as the F-35Bs, which are capable of making short takeoffs and vertical landings, have been stationed at Marine Corps Air Station Iwakuni in Yamaguchi Prefecture, western Japan, since January.

Regarding Osprey aircraft, the U.S. government has said the rate of severe accidents involving the Marines' V-22s rose about 1.7 times from the figure released in April 2012, when the aircraft was not yet deployed to Marine Corps Air Station Futenma in Okinawa, the Japanese Defense Ministry said Wednesday.

The rate represents the occurrence of what the U.S. military calls Class A mishaps per 100,000 flight hours. A Class A mishap is categorized as the severest on a scale of four, resulting in loss of life or permanent total disability, destruction of an aircraft or damage worth $2 million or more, according to the U.S. Naval Safety Center.

As of the end of September, the rate stood at 3.27, the highest ever based on past data available to the Japanese ministry. It was also higher than the rate of total accidents involving all Marines aircraft, which stood at 2.72.

The U.S. government attributed the rise to the fact that Ospreys are used in extremely tough conditions, according to Japanese officials. The officials also played down concerns over the safety of the aircraft itself.

But the latest data could still prompt calls among Okinawans for the aircraft to be removed from the prefecture.

A total of 24 V-22s had been deployed at the Futenma base by the end of September 2013. But in December 2016, one crash-landed off the city of Nago in Okinawa, with two of the five crew members injured. In August, another crashed off Australia, resulting in the death of three U.S. Marines.