North Korea test-fired a ballistic missile over northern Japan into the Pacific Ocean on Friday with an unprecedented flight distance that would have been enough to reach the U.S territory of Guam, despite years of sanctions over its weapons program and the international community's repeated calls for restraint.

The missile, believed to be an intermediate-range type, flew around 3,700 kilometers and reached a maximum altitude of 800 km, according to Japanese officials. 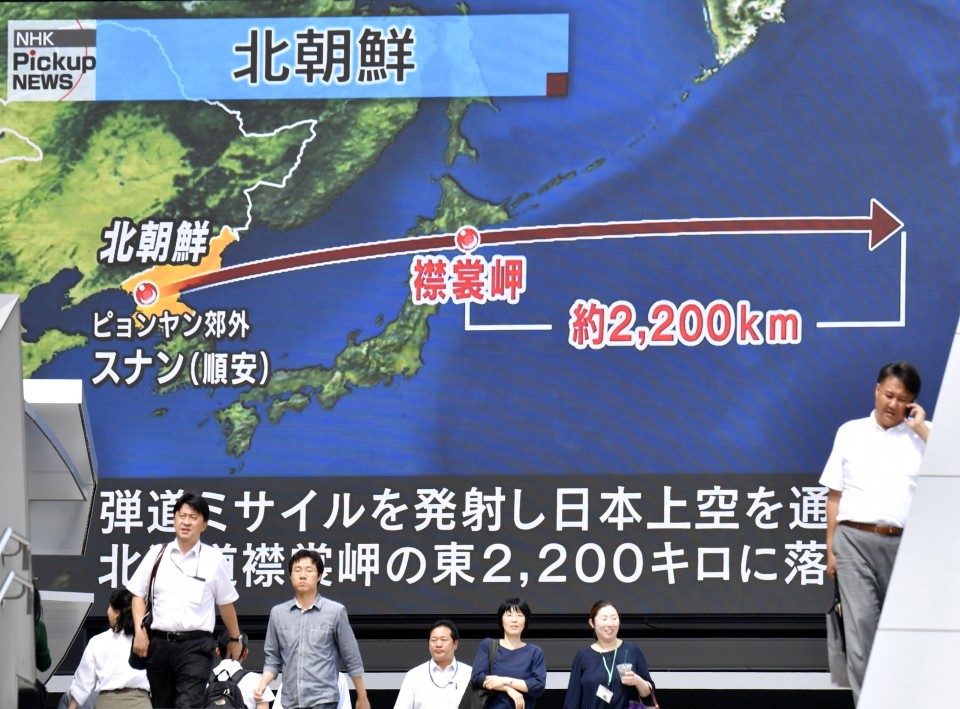 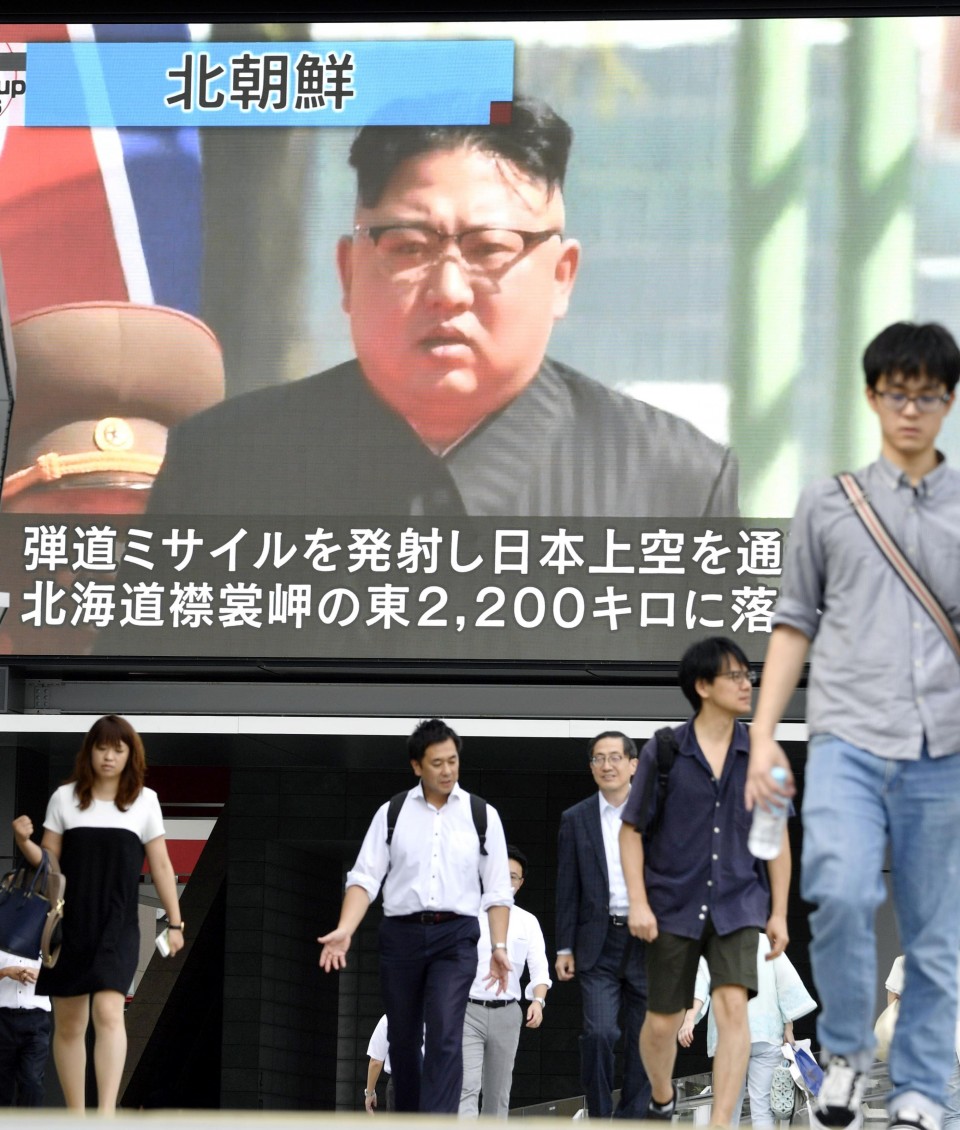 The launch before 7 a.m. came less than a week after the U.N. Security Council voted in favor of a resolution toughening sanctions on North Korea following its sixth nuclear test on Sept. 3.

It flew a longer distance than any other missile North Korea has fired, and was the country's second missile in less than a month to cross over Japan.

There were no reports of damage, Japan's top government spokesman Yoshihide Suga told a hastily convened press conference, after the missile, apparently tested on a normal trajectory, fell into the sea about 2,200 kilometers east of Hokkaido's Cape Erimo at 7:16 a.m.

"Now is the time when the international community is required to unite against North Korea's provocative acts, which threaten world peace," Japanese Prime Minister Shinzo Abe told reporters in Tokyo. "We must make North Korea understand that if it continues down this road, it will not have a bright future."

The U.S. Pacific Command said its initial assessment showed that it was an intermediate-range ballistic missile.

Japanese Defense Minister Itsunori Onodera also said it could have been an intermediate-range Hwasong-12 missile, known as KN-17 in the United States, after analysis of its flight data.

The latest launch is viewed by Onodera as being intended to test the newly developed missile's performance and its flight distance, which defense officials believe has a range of up to about 5,000 km.

South Korea's military said the missile was fired from the vicinity of Sunan in Pyongyang, where North Korea's international airport is located.

This was North Korea's first missile launch since its sixth nuclear test -- its most powerful yet, conducted about a week before the 69th anniversary of the country's founding -- which it claimed was of a hydrogen bomb.

North Korea also test-fired in July two intercontinental ballistic missiles believed capable of reaching the U.S. mainland, and a Hwasong-12 missile in late August also from near Sunan that crossed Japan before landing in the northern Pacific Ocean.

On Aug. 29, the Hwasong-12 traveled about 2,700 km on a similar path as that of Friday's missile, just weeks after North Korea threatened to fire four ballistic missiles into the sea near Guam, home to about 7,000 U.S. troops and 160,000 people,

Guam, the closest U.S. military presence on American soil to North Korea, is about 3,400 km away from the country.

The international community was bracing for another provocation by North Korea, including a third launch of an ICBM, after the Security Council unanimously approved a resolution Monday to impose a new round of sanctions, including a ban on its textile exports and a cap on its imports of crude oil.

North Korea has asserted it has a legitimate right to develop nuclear and ballistic missile capabilities for self-defense against what it perceives as security threats from the United States and other "hostile" forces.

Ahead of the Security Council's adoption of the resolution, North Korea threatened to cause the United States the "greatest pain" it has ever suffered.

A statement released by the Foreign Ministry on Monday said that if additional U.N. sanctions led by the United States are approved, the rest of the world would witness how North Korea "tames the U.S. gangsters by taking series of action tougher than they have ever envisaged."

On Tuesday, accusing Abe's government of "dancing to the tune of the U.S. sanctions," a North Korean government body said a "telling blow" should be dealt to Japan and its "four islands of the archipelago should be sunken into the sea."

In response to the sixth nuclear test, the United States had initially sought to have the 15-member Security Council impose much harsher sanctions against Pyongyang, including an oil embargo and a freeze on leader Kim Jong Un's assets.

Japan has estimated the explosive device detonated by North Korea most recently had a yield of about 160 kilotons, 10 times the force of the world's first atomic bomb dropped by the United States on Hiroshima in 1945.

The U.N. resolution was endorsed only after China and Russia, two of the five veto-wielding permanent members on the council, agreed to vote for weaker sanctions than those proposed by the United States.

While the U.S. administration of President Donald Trump and its allies, including Japan and South Korea, have agreed to press for a maximum level of pressure on North Korea, China and Russia have warned that excessively tough sanctions against it will risk further increasing tensions.

China and Russia have said the situation will only change when North Korea's security concerns are addressed. The two countries have called for restarting negotiations and at the same time demanded that the United States and South Korea halt their annual military exercises.