Idol groups such as the iconic AKB48 are synonymous with Japan. Known for their cutesy, highly-choreographed stage performances and film clips, they personify Japanese pop culture.

What far fewer know is the subculture that has spawned "chika idols," or underground idols, a phenomenon that has grown at an incredible rate, and brought with it some serious downsides. But, like their successful idol cousins, underground idols still dream of making it big. 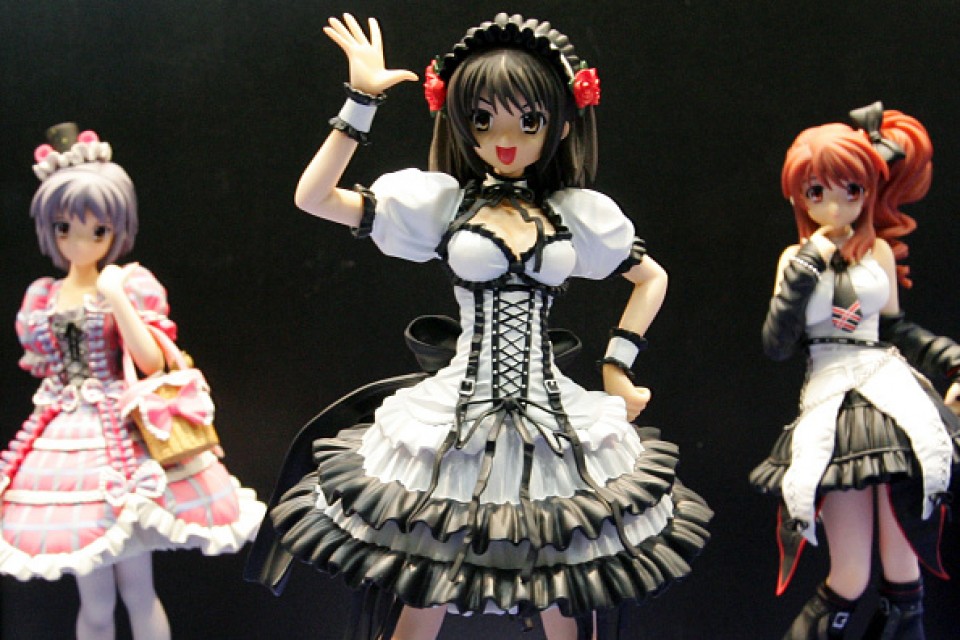 In many cases, the underground idol groups, which now number in the hundreds, are being taken advantage of by exploitative production companies who prey on their ambitions and force them to sign exclusive long-term contracts that all but make them slaves to the entertainment industry, experts say.

Four former members of the chika idol group Nijiiro Fanfare, which gained popularity through internet live streaming, demanded that they be able to leave the group because of what they described as intolerable working conditions.

Later, one of them was effectively told in a meeting with the female production manager that she would never find work in the idol business again. "Don't ever try to become an (idol). I will crush you with everything I've got," she was told.

According to the former group members, they were forced into seven-year contracts they could not break. After deductions from a monthly salary of just 38,000 yen (about $340) for lesson fees, their take-home pay was zero.

There was also no remuneration for work they were required to do in generating social media content and most of the costs they incurred for their wardrobe they also had to cover themselves.

"My friend said to me it sounds like a 'slave contract.' But I had thought this was just normal," said Aya Kotobano, 23, one of the former Nijiiro Fanfare members and plaintiff in a lawsuit against the Tokyo-based production company D-Topia Inc.

Even after requesting better treatment, they were ignored and eventually they stopped their training altogether, they said.

The four filed a lawsuit with the Tokyo District Court in November of last year, seeking a nullification of their contracts and payment of their wages. They settled out of court in May this year.

Although the amount of the settlement has not been disclosed, their lawyer said, "The four were satisfied with the result."

The case of the four former Nijiiro Fanfare members appears to be only the tip of the iceberg in an industry where other underground idols have seemingly come to accept such practices.

"It is grueling work," one underground idol in her 20s from a famous group said.

She says if she is lucky, she gets one day off per month. There are events held nearly every day and afterwards she must sell promotional items, meaning she often does not get home until after 11 p.m. She says that because of her intense schedule she often is not able to bathe for days at a time.

Despite the group's relative success, on average she makes just 30,000 yen per month and must pay out of pocket for transportation costs to events. She says she lives off the savings from her previous job as an office worker.

In order to take time off when sick, she must submit a medical report to her production company, but she is in such dire straits that she cannot afford the certificate's issuance fee. In principle, she is locked into a three-year contract and will be charged a hefty penalty if she leaves the group before the end of the deal.

She often sees minors who come to take lessons late at night and there is even a chika idol acquaintance of hers who has self-harmed herself, leaving scars on her wrists, and others who have suffered depression.

Although the situation is anything but normal, she said, "I honestly didn't think anything was strange. I became numb to it." 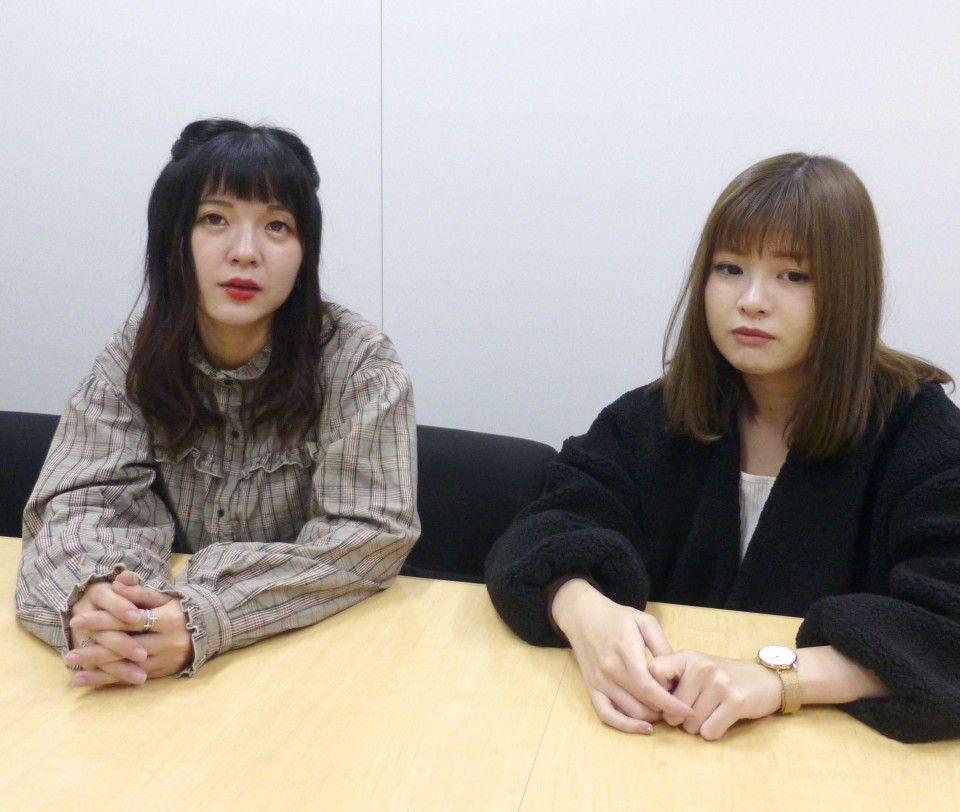 (Aya Kotobano, left, a former member of the chika idol group Nijiiro Fanfare, speaks in an interview with Kyodo News on Oct. 23, 2018 with another former member Natsumi Ogi.)

In what might be viewed as the imposition of almost cult-like control, her production company coerced her to leave social media platforms such as Twitter, cutting her off from those around her. "I just wish there was an environment where I could get advice from someone, even if to just to vent."

One of the major reasons underground idols are unable to escape such extreme circumstances is due to "exclusive management contracts" with production companies, experts point out. It is this gray zone -- contracts with no clear rules to speak of -- that make them so pernicious.

According to Kunitaka Kasai, a lawyer with the Entertainers' Rights Association, a group that protects the rights of celebrities, "Young girls and women are often at a disadvantage because they find it difficult to discern whether the conditions of their contracts are suitable or not."

A reason for this is the growing number of small- and medium-sized production companies with little experience or know-how in dealing with talent. "Since there are no clear rules, we don't know what to do and are just groping in the dark with our operations," revealed one production company representative.

The Labor Standards Inspection Office is also hesitant to provide guidelines with regard to the contracts of idols, who are treated as sole proprietors, meaning the labor standards law does not apply.

Honoka Omoto, who was a member of Enoha Girls, a local idol group that promoted the charms of agriculture in Ehime Prefecture, committed suicide in March at the age of 16.

After her death, her mother Yukie, 42, consulted with the Matsuyama Labor Standards Inspection Office but was told her daughter had signed a "gray contract."

"I was in shock because I had nowhere else to turn for help," her mother said. The family filed a lawsuit with the Matsuyama District Court on Oct. 12 against the production company, demanding compensation from the overwork they claim led to her death.

"Unless they are regarded as workers under the conditions of the contract, we aren't able to get involved as the labor inspection office," said a labor official from the Matsuyama office.

And the rise in trouble with production companies is not limited to underground idols.

Experts point out that even for hugely popular groups like SMAP or other talent such as actress and fashion model Rena Nonen, there are problems, especially regarding production companies using their position of power to secure favorable contracts and restrict talent from defecting to other companies.

In a meeting of the Japan Fair Trade Commission in February, council members suggested that the practice of restricting talent from switching production companies could be a violation of antitrust laws -- arguing that it is "very significant that the practice runs deep within the entertainment world."

Akira Hamamura, a professor specializing in labor laws, said, "It is significant that (the council members) saw this as a possible abuse of the production companies' dominant bargaining position."

He added that the unfairness of restricting celebrity movement "steals the freedom to choose an occupation as stipulated in the Constitution, and obstructs the benefits of consumers who wish to watch the activities of the different talent."

Lawyer Tsuyoshi Fukai, who handles disputes between underground idols and production companies, says the latter often prey on the hopes and dreams of children.

"The contract conditions are favorable for these companies. Idols are prohibited from talking about their activities. I think there is a lot of talent who have no friends or family they can talk with," Fukai said.

Fukai explained that in many cases contracts stipulate that production companies decide wages. Even if there are sales from CDs or live concerts, some companies do not pay a fixed wage at all and in other cases contracts are nonexistent.

"The working hours and locations are all determined for them, so they are actually laborers. But because of the contracts, many believe they do not have the right to protection," he said.

Even If they are able to find a way to leave the company before their contract expires, underground idols are "banned from show business for 'x' years," he said.

Fukai says to combat the problem of unfair contracts in the industry the government needs to step in. He hopes an ongoing debate on protecting the employment rights of chika idols being carried out by an investigative commission of the ministry of labor will bear fruit.

"As a concrete measure, young people need to be able to easily do searches on their smartphones or other devices to find places where they can get legal advice and discuss contracts," he said.