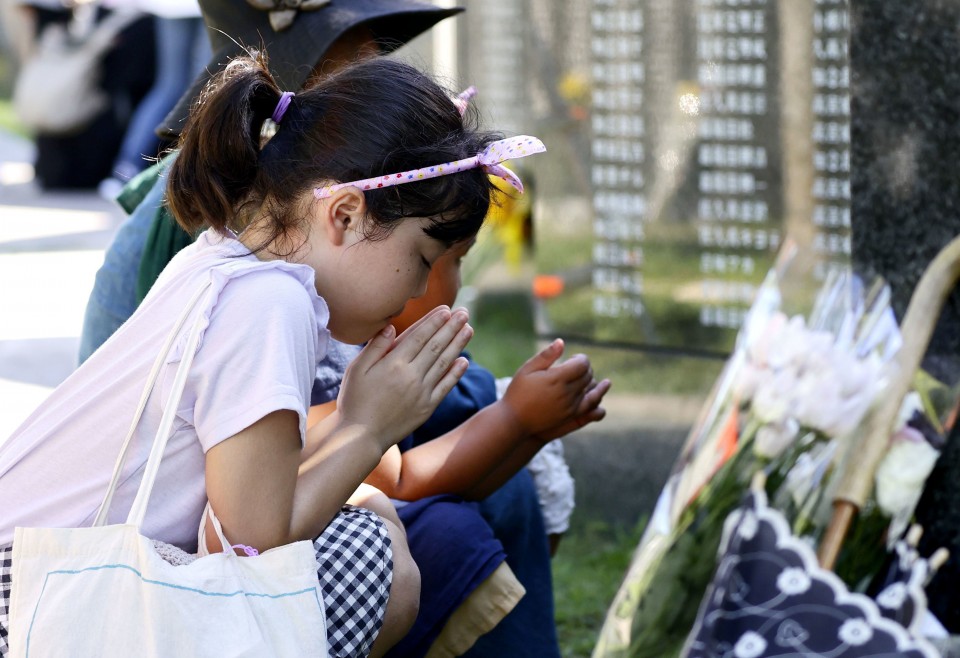 Children pray at a monument at the Peace Memorial Park in Itoman in Okinawa Prefecture, southern Japan, on June 23 2022, the 77th anniversary of the end of the Battle of Okinawa. The names of over 200,000 people who lost their lives in the major World War II ground battle between Japanese and U.S. troops are engraved on the monument. (Kyodo) ==Kyodo

The Supreme Court's Second Petty Bench ruled that the continued existence of the posts constituted an invasion of the man's privacy, overturning a Tokyo High Court ruling and affirming a district court's decision.

TOKYO - Prime Minister Fumio Kishida is set to reiterate Japan's opposition to any actor using force to unilaterally change the status quo when he travels to Germany and Spain for leaders' gatherings from Sunday, while pressing a case for coordinated action to punish Russia for its war in Ukraine.

As leader of the only Asian nation in the Group of Seven -- and the first Japanese prime minister to attend a summit of the North Atlantic Treaty Organization -- his mission is also to address the situation in Asia and the broader Indo-Pacific region which is increasingly being challenged by an assertive China.

TOKYO - SMBC Nikko Securities Inc. said Friday an investigation panel looking into the major Japanese brokerage's market manipulation scandal has called it an "inappropriate and unfair act," adding the incident was not prevented because of a failure in its corporate governance system.

In a report handed to the brokerage firm on Friday, the panel said SMBC Nikko employees lacked a sense of social norms that could have prevented the scandal, which led to the indictment of the company's former deputy president and five others.

TOKYO - Foreign ministers from the Group of Seven nations are meeting in Germany on Friday in the hope of confirming cooperation over Russia's invasion of Ukraine ahead of their leaders' talks later this month.

Japanese Foreign Minister Yoshimasa Hayashi is joining the talks with his G-7 counterparts online, according to his ministry. The issue of food shortages, which affect such regions as Africa highly reliant on Ukrainian grain imports, is also among the planned topics.

Power-saving reward points worth 2,000 yen to be given to households

TOKYO - The Japanese government said Friday it will provide power-saving points worth 2,000 yen ($15) to households if they take part in a power-saving program.

In the run-up to a House of Councillors election next month, Prime Minister Fumio Kishida revealed earlier this week the government will introduce the reward points system to reduce the burden on households of rising electricity prices propelled by Russia's ongoing invasion of Ukraine.

TOKYO - Nihombashi bridge will see the light of day again in fiscal 2040, with work commencing to remove an expressway over the historic landmark in Tokyo.

Metropolitan Expressway Co. invited media Friday to view the work to remove the elevated expressway, which will be rerouted underground as part of a 320 billion yen ($2.3 billion) renewal project.

The bodies are believed to be those of Akira Soyama, a 27-year-old deckhand, and a woman who were among 12 people still unaccounted for after the Kazu I sank in bad weather.

Japan core CPI up 2.1% in May, above BOJ's inflation target again

TOKYO - Core consumer prices jumped 2.1 percent in May from a year earlier, staying above the Bank of Japan's inflation target for the second straight month, lifted by higher energy and food prices, government data showed Friday.

The nationwide core consumer price index excluding volatile fresh food items rose for the ninth straight month, a sign that cost-push inflation has shown no signs of abating as a sharp slide in the yen continues to inflate import costs for resource-poor Japan.