Nihombashi bridge will see the light of day again in fiscal 2040, with work commencing to remove an expressway over the historic landmark in Tokyo.

Metropolitan Expressway Co. invited media Friday to view the work to remove the elevated expressway, which will be rerouted underground as part of a 320 billion yen ($2.3 billion) renewal project. 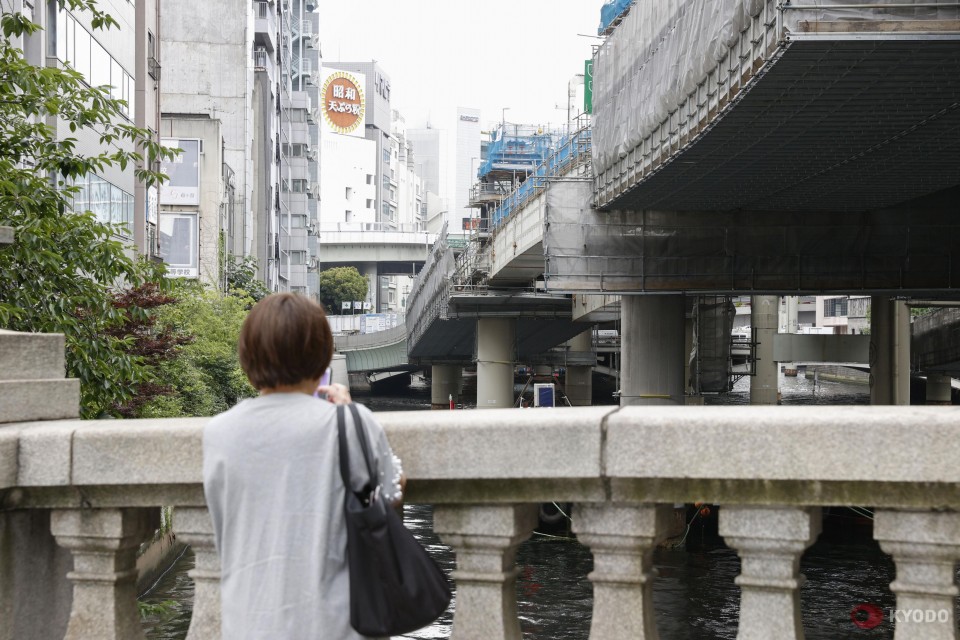 Photo taken on June 24, 2022, shows the Nihombashi bridge in Tokyo with ongoing work to remove the elevated expressway. (Kyodo)

The original Nihombashi bridge, built in 1603, was the eastern terminus of the Tokaido road linking Tokyo, then known as Edo, with Kyoto.

The current stone bridge constructed in 1911 is a designated national cultural property.

Local residents had long protested that the expressway spoils the view of the 49-meter bridge. A former land minister in 2001 pledged to reroute the overpass in the Nihombashi area, an upscale shopping district, but the plan did not proceed until 2018 due to the huge cost.

The expressway was built as part of the network connecting 1964 Tokyo Olympics venues with Haneda airport.

A significant portion of the expressway in central Tokyo was built over rivers and canals to minimize the need for land purchase negotiations and complete construction in time for the Olympics.

Metropolitan Expressway plans to construct a 1.1-kilometer underground tunnel in the area while removing the overpass by March 2041.

The project covers a 1.8-km stretch of the expressway between Kandabashi junction near Tokyo Station and Edobashi junction.

The cost of the replacement work will be shouldered by the expressway operator, municipalities and companies planning the redevelopment of the Nihombashi area.