Japan's new era beginning May 1 following an imperial succession will be called "Reiwa," with Prime Minister Shinzo Abe saying Monday it is taken from a Japanese classic for the first time and signifies people joining their hearts to develop the country's culture.

Abe said the concept of the new era name, or "gengo," was adopted from Japan's oldest collection of poems from the late seventh to eighth centuries, marking the first departure from Chinese classics in more than 1,300 years of the era system being in use. In announcing the era name, Chief Cabinet Secretary Yoshihide Suga held up a work of calligraphy showing Reiwa comprised of the Chinese characters of "rei" meaning good or auspicious, and "wa" representing harmony or peace.

Following the announcement, many in the public showed a positive reaction while some companies scrambled to secure business opportunities with the historic event, preparing products inscribed with the kanji characters.

In modern Japan, era names are used for the length of an emperor's reign and Reiwa will commence when Crown Prince Naruhito, 59, will ascend to the throne on May 1, succeeding his 85-year-old father Emperor Akihito. 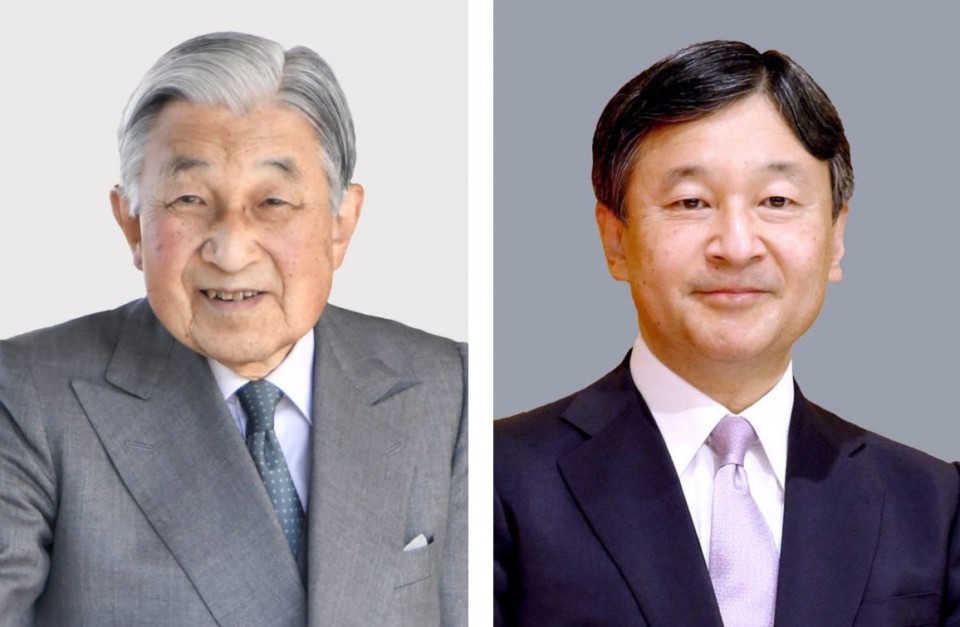 Asked why the new gengo was adopted from a Japanese classic, Abe told a press conference, "Although our country is facing a big historic turning point, Japan has values that will not fade away. We decided on the era name originating from a native source based on such a belief."

Abe said Japan's 248th gengo derived from the 1,200-year-old "Manyoshu" anthology of poems, which is symbolic of the country's rich culture and long tradition. "We have to hand down to the next generation our country's everlasting history, fragrant culture and beautiful nature represented in all four seasons," he said.

But some observers said the choice of a Japanese classic as an original source reflects the nationalist leanings of Abe's conservative government. Since Taika, the first gengo which started in 645, all era names with identifiable sources were drawn from Chinese classics.

"The name Reiwa means that culture is born and grows when people come together and care for each other beautifully," Abe said. The era name is a matter of huge public interest in Japan as it will be widely used in calendars, newspapers, official documents and certificates including drivers' licenses.

Neither Abe nor Suga made public who suggested Reiwa and other potential names, citing their wishes and the need to avoid any trouble by specifying who proposed which name. A government source said it was picked from six candidates.

The government informed the current and next emperors of the new gengo. Emperor Akihito listened to the news "with his usual expression" and Crown Prince Naruhito nodded with a smile, saying, "I understand," according to the head and deputy chief of the Imperial Household Agency.

The Cabinet of Abe decided the new era name after hearing the opinions of nine experts from media, business, academia and other circles. Kyoto University professor Shinya Yamanaka, who won the Nobel Prize in physiology or medicine in 2012 for developing so-called induced pluripotent stem cells, was among them.

Gengo are usually announced after the accession of the new monarch. But with Emperor Akihito stepping down on April 30 as the first Japanese monarch to do so in about 200 years, the government decided to unveil the new era name prior to the imperial succession to minimize disruption caused by the calendar change.

Japan is the only country in the world that currently operates under the era name system, which has its roots in China, although it also commonly uses the Gregorian calendar. 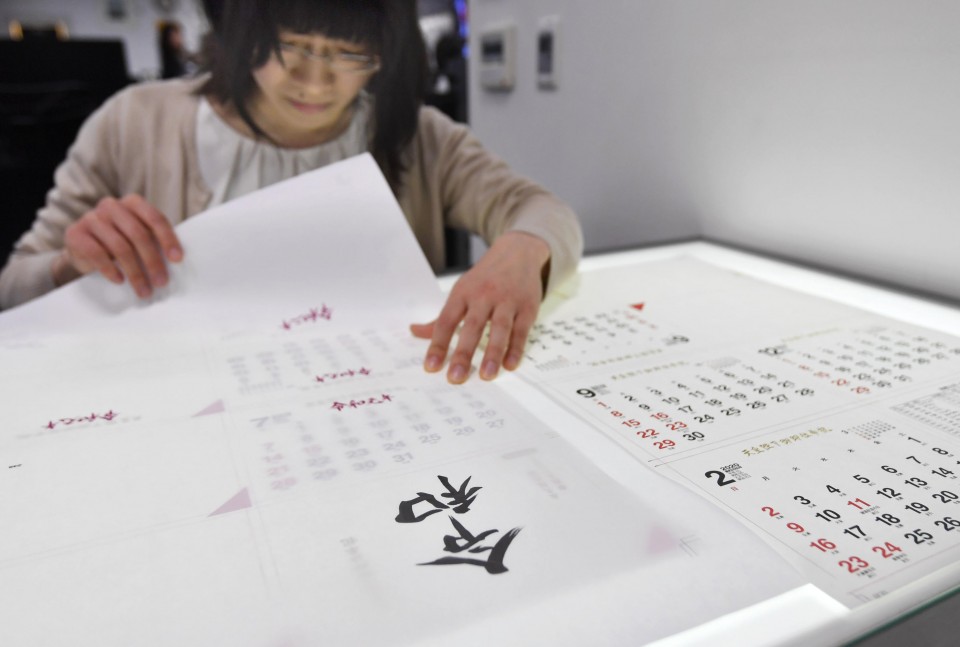 Some people claim the use of two styles is troublesome, but others support the gengo system because it evokes an image of certain historical events and represents the mood of each period. For example, the 1868 political revolution in Japan is called the "Meiji Restoration."

In principle, the government seeks to choose a name that is composed of two Chinese characters, or kanji in Japanese, and carries a positive meaning appropriate to the ideals of the people. It should also be easy to write and read, not commonly used and not used in previous era names.

On March 14, the government officially requested experts in such fields as Japanese literature, Chinese literature, Japanese history and East Asia history to craft their era name proposals, according to Suga.

Amid a raft of guesses on the new gengo in various surveys including online ones, government officials warned that names in wide circulation would be excluded and candidates reported by the media prior to the official announcement would be replaced.

The government completed the procedure to pick and announce the new era name in about two hours Monday morning in an attempt to prevent the new gengo from being leaked by people involved in the process.

Many Japanese anxiously awaited the historic announcement of the new gengo. Crowds of people stopped in front of digital billboards and televisions at retail stores to watch special programs on the announcement before noon.

People struggled to grab a copy of newspaper extras distributed across the country. In Osaka, police officers were mobilized to control a crowd of people.

In the business world, companies including stamp makers, calendar manufacturers and sake cup producers started preparing their products inscribed with the two Chinese characters for Reiwa. 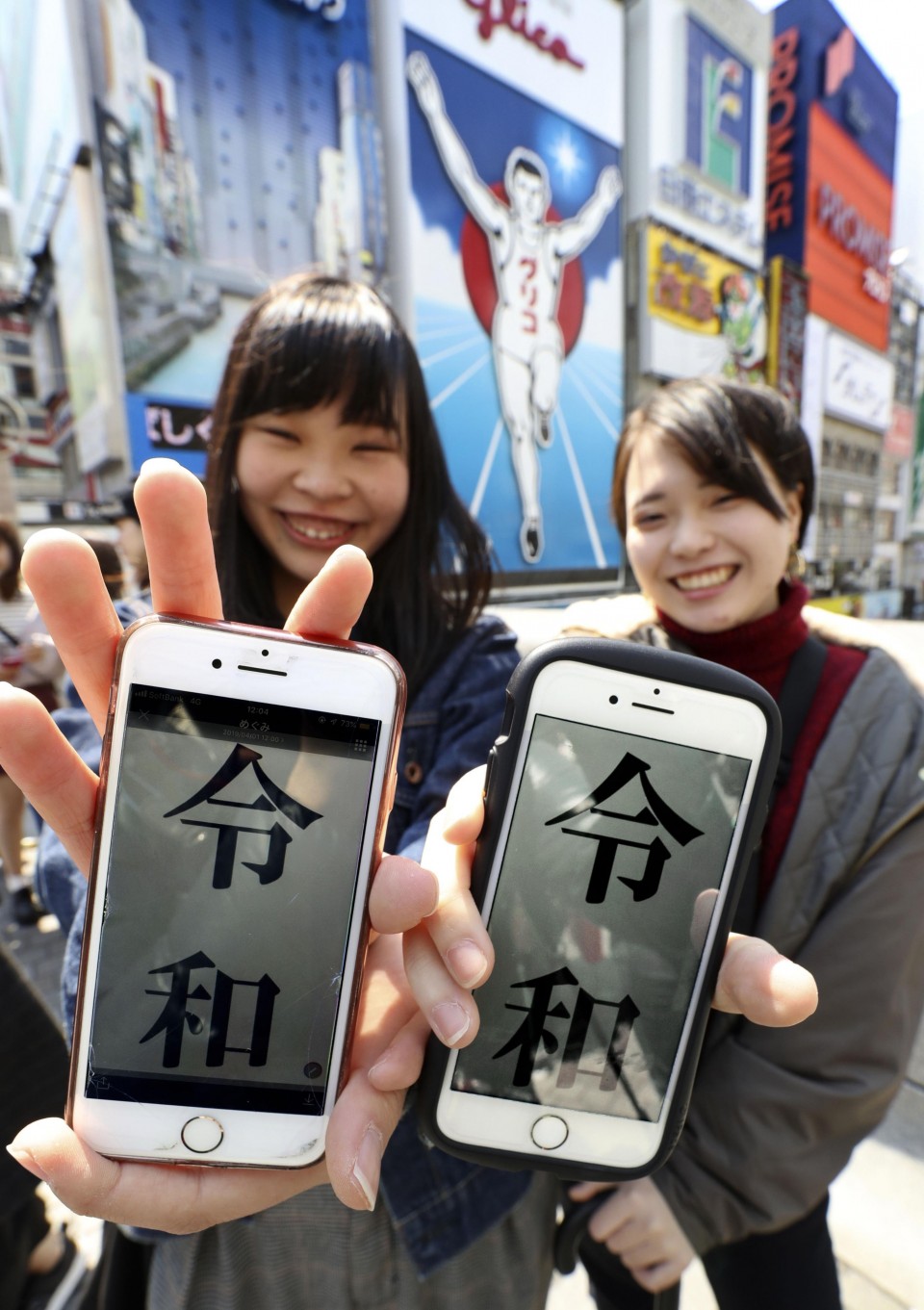