"Try our mochi," calls out Nao Sakai at a Tokyo market as she sells rice and "mochi" that was made at her family's shop in Yamagata Prefecture, a three-hour travel by high-speed rail north from Tokyo.

Mochi, or glutinous rice cake, is a popular Japanese treat especially during the New Year, and it holds a special place in Japanese hearts. Mochi can be eaten in different ways but it is traditionally eaten as "ozoni" in a clear soup, and considered the most auspicious dish eaten on New Year's Day. 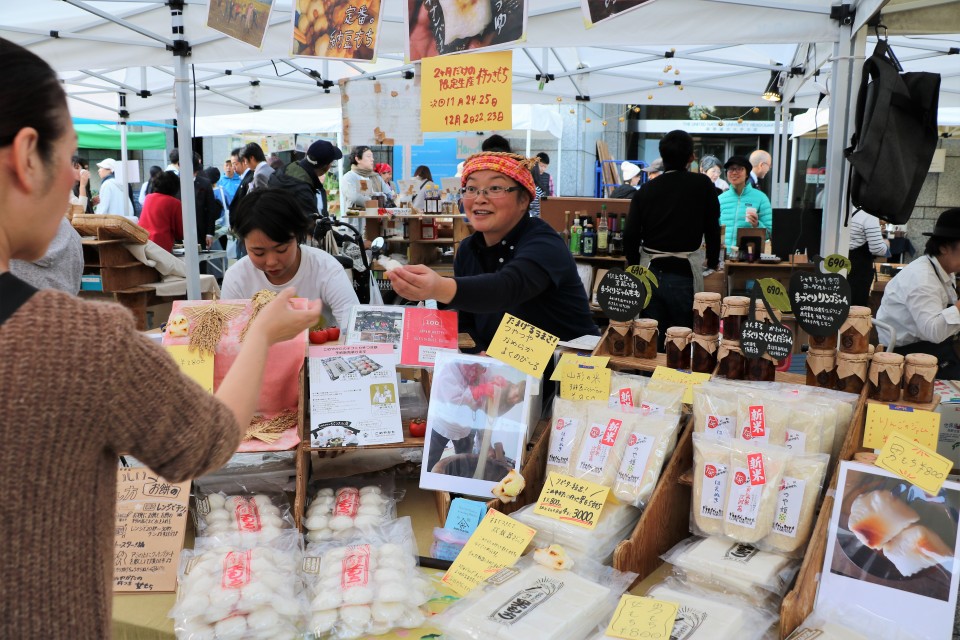 November and December are the peak season for selling it, says Sakai. She sells two types: The round "onna mochi" and the square "otoko mochi" -- referring to the Japanese words for woman and man, respectively.

Sakai, 41, travels around Japan to sell mochi in various places, at local events, farmers' markets, department stores and guesthouses, from Tokyo to as far as Osaka and Kyoto.

Each November, her family's business uses the traditional method of "mochitsuki," pounding mochi rice in a mortar with a large, heavy mallet, both made of wood, at the small factory based in the Yamagata city of Murayama. The Komeyakata rice shop doubles as a guesthouse.

While she is busy with customers, her family and Komeyakata's staff count out loud the number of times they pound the mochi, as they flip corresponding number cards.

Each batch of mochi rice placed in the mortar weighs 5 kilograms and is beaten 200 times. A man rears back and pounds it as hard as he can with the "kine" mallet, a woman then flips it over, and every 20 beatings, the man is replaced by another man.

The women switch when they get tired. This is done from 8 a.m. to 6 p.m., at least 16 times a day, to make 200 packs of mochi daily, half each for the otoko and the onna mochi, explains Yoichiro Sakai, 42, Nao's eldest brother and "boss."

The mochi is then molded into shapes, carefully inspected, kept in storage and packed by a dozen staff or so in the factory. 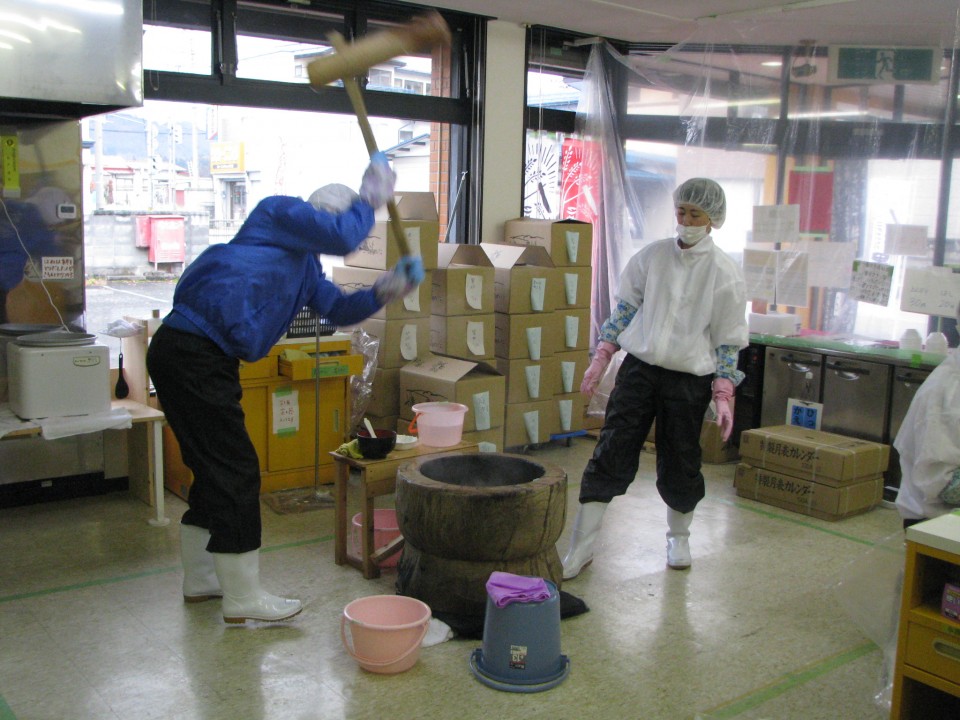 "Mochi starts getting smooth, shiny and whiter by the time it's beaten 150 times," Nao explains. "But to be certain that it's delicious, we have to pound it 200 times."

"The taste is really different" from machine-beaten ones, says Nao's husband Sam Wilson, 36, originally from Britain who has been doing mochitsuki daily. "It is a lot smoother." Good mochi is almost transparent when stretched, as he demonstrates.

Mochi tastes better when made with mochi rice, rather than rice powder as is usually the case with industrially produced mochi, says Wilson as he drives to a tract where they harvest their special rice in late September and early October with staff and volunteers.

Over the rice shop's 130-year history, the Sakai family have kept adding to their business, expanding from rice seller to rice cultivators and then to mochi producers. But making mochi was a family tradition before it became a business about six or seven years ago.

For around 20 or 30 years -- none of the younger Sakais know when exactly -- the family has been inviting neighbors and friends over to share homemade mochi every November.

Their grandmother used a machine then and at times sold some mochi casually to friends in Tokyo. But when the fifth generation decided to take it over from her, "We decided, well, if we're going to do it, let's do it properly. Let's do it by hand," Wilson recounts about the family's decision to use the traditional mochitsuki method.

They also started the mochitsuki "because it's really fun," says Yoichiro.

"We named the business Komeyakata, which literally translates into 'rice' and the old word for 'family.'" Making mochi is hard and cannot be made alone, he says. In the old days, mochitsuki was done "everywhere" by families.

Hitomi Abiko, a vegetable farmer, came by the factory one snowy day to buy fresh mochi with her Tupperware already filled with salty fermented "natto" soybeans -- a common way to eat mochi in the region -- for her elderly father. Mochitsuki is "very rare" and Komeyakata's mochi is filled with "the men's strength," she says.

An American university professor staying at Komeyakata's guesthouse also enjoyed watching the mochitsuki. "I've seen a couple of times demonstrations like this in Nara but this definitely feels authentic," said Heather Yoder, 31. "I've never had such good, fresh mochi before," she said as she ate her chocolate-covered mochi.

"When we do it, everyone from the neighborhood comes, and it's noisy and fun," Nao Sakai says. "I like to think that joy is transferred into our mochi so that people who eat it become extremely happy."

Komeyakata ships out all of its mochi by Dec. 20 but Sakai likes to travel to sell directly to customers because "it's so enjoyable, and I think our customers feel confident when they meet their producers.

"I come to sell mochi in Tokyo, because I believe it leads to customers becoming even happier about seeing us and eating our mochi that is imbued with our joy," she says.

That joy was spread as she sold her products at Aoyama Food Market in central Tokyo, when a Chinese student Hu Xuebin, 20, tasted some mochi that Sakai's stall was offering to passers-by. It was the first time for her to taste Japanese mochi and was a different experience from rice cakes back home but still good, Hu said.

"So mochi is considered delicious everywhere in the world!" Sakai said.