In a fashionable area of Shizuoka city, an hour west of Tokyo by bullet train, is a teahouse where a young French woman is attempting to spread her passion for Japanese tea to the world, especially to youth unfamiliar with its place in their cultural heritage.

Marie Roux, 24, has been working at Maruzen Tea Roastery cafe for less than a year. She greets customers with flawless Japanese, brewing them tea at custom-ordered temperatures and serving them tea-infused gelato. 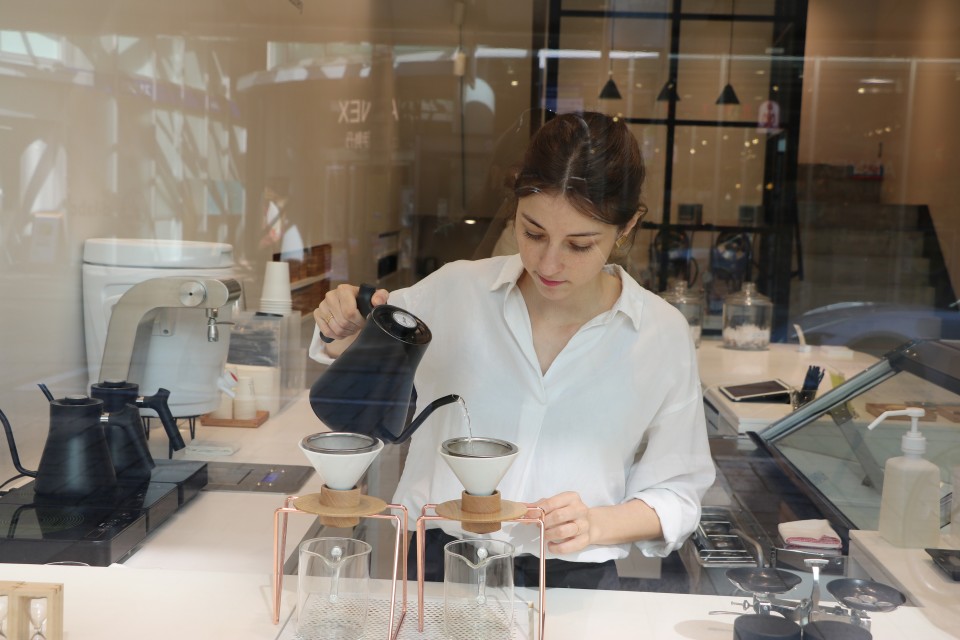 Roux, from Besancon in France's Bourgogne-Franche-Comte region, never expected to find her life consumed by her passion for Japanese tea. As a university student, she was only interested in studying Japanese after reading manga and watching anime as a teen. She wasn't even sure if she would ever go to Japan.

A chance encounter at her university with a senior student who had just interned at a Japanese tea farm sparked her curiosity. It was soon followed by a tea tasting organized for students studying Japanese.

"I had a revelation. I had never tasted anything so good. I wanted to learn more," Roux said.

She decided then and there to reorient herself toward studying Japanese tea. She flew to Japan where she did a three-month internship at a tea farm, studied for a year at Ritsumeikan University in Kyoto to improve her Japanese, and after graduating in France, returned east to delve even further into the world of tea.

She was hired as the cafe's self-appointed "kanban musume" -- an old-fashioned word that means a young girl who attracts customers to a shop. 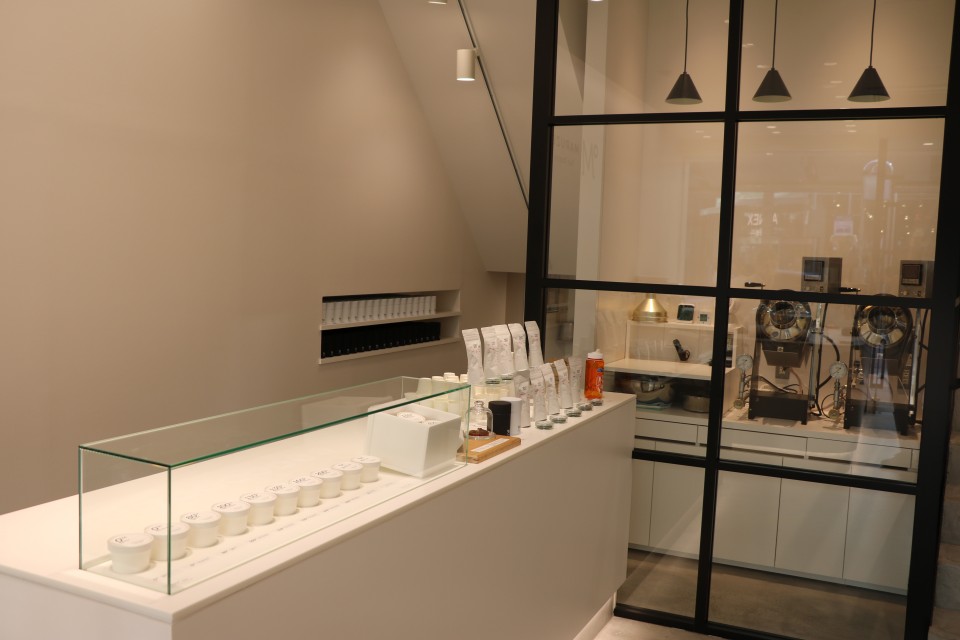 The beauty of tea is multi-faceted, she says, and she would like to show her appreciation to the fullest, not just embracing the feelings that tea evokes for her but also the science underpinning it.

"Tea has great health benefits. A lot of people focus on coffee to stay alert but tea actually has the ability to make you alert and relaxed," she says, explaining its dual benefits.

Roux also cherishes the special way that tea creates a setting for people to come together, regardless of their backgrounds. She references the Japanese term "ichigo ichie," which describes the cultural concept of treasuring meetings with people and is closely associated with Japanese tea ceremonies.

It translates as "one chance in a lifetime," as in, the same gathering will never happen twice. "Even if you speak different languages, even if you drink tea with people from different countries, you can always share something through tea," she says.

These are the types of things that Roux would like to impart to others. Speaking about her native country, she says that the French understanding of Japanese tea is "still cliched," with a superficial knowledge of matcha ice cream and the tea ceremony as a symbol of Kyoto similar to geisha. "We don't really hear about Japanese sencha or hojicha. Only connoisseurs do."

Even Japanese drinkers of hojicha are unsure of its origin, according to Roux, tripped up by its reddish brown color.

"A lot of people are surprised to hear that hojicha is actually green tea. It only becomes hojicha after you roast the leaves," she says. "They don't realize that both teas are derived from the same plant." 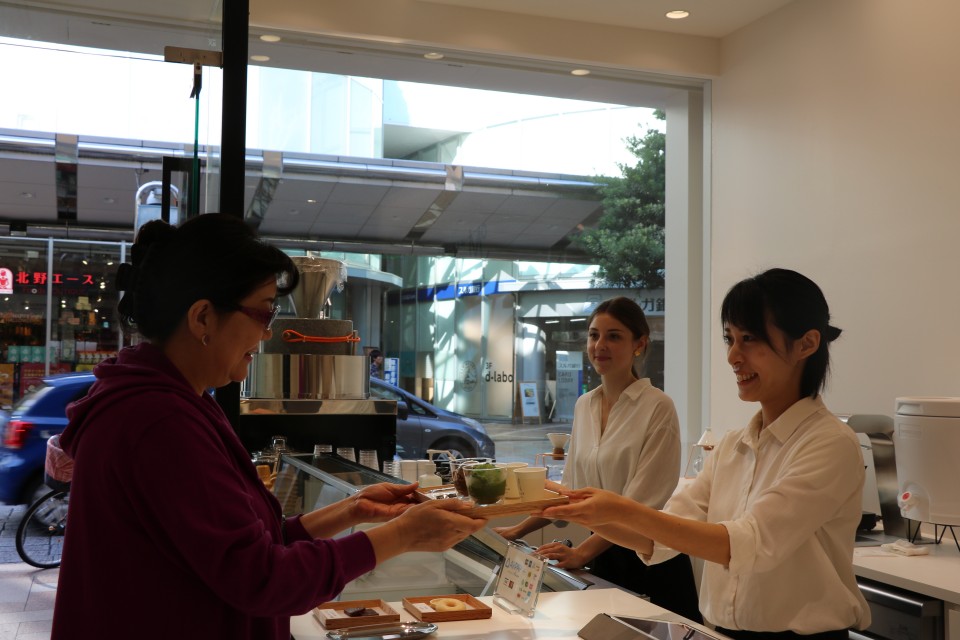 Japanese tea leaves go through a process of being steamed, rolled and dried, although hojicha leaves go through an extra step of being roasted. The steaming prevents the leaves from becoming oxidized, retaining their green hue throughout the processing. In the case of hojicha, the leaves take on a reddish color as they are roasted. The roasting also removes nearly all of the caffeine.

"You ingest lots of good elements when you drink green tea. When we talk about green tea, we talk a lot about catechins and anti-oxidants, but that's not all they have. We rarely talk about the caffeine-theanine combination which simultaneously relaxes and makes you alert."

Roux's immediate focus is to impart to Japanese youth a deep appreciation for tea, which she feels has become increasingly neglected.

"People ask 'Do you want to export this culture of tea to (France)?' Yes, but it's not really my principal goal," she says. "What I want to see is Japanese people realizing how tea has a great importance in their culture and is something that needs to be cherished."

Young people have an image of tea as "something rather old" and drab which she says is a shame. People have been drinking tea since their childhood and it's become as "common as water," so they do not know the chemistry behind the tea, or even that all types of tea come from the same plant.

"I want everything about tea to become second-nature to the Japanese, especially the young," she says.

She does public relations for the cafe but her Instagram account shows a realm beyond its products as she adds photos and text to teach people about tea, wanting them to learn the background and "the details" such as how tea is made.

Aware that people scroll past photos quickly, she puts up "classy" pictures that are eye-catching enough for people to stop and hopefully read the accompanying text, which she carefully crafts in both English and Japanese.

She admits it is a difficult task, as neither is her native language, and she tries to synthesize as much information as possible into a few words.

Now she is studying to pass an exam to become a "Japanese tea advisor" and reads books on tea. "They are in Japanese so it takes time but it's very interesting," she says. 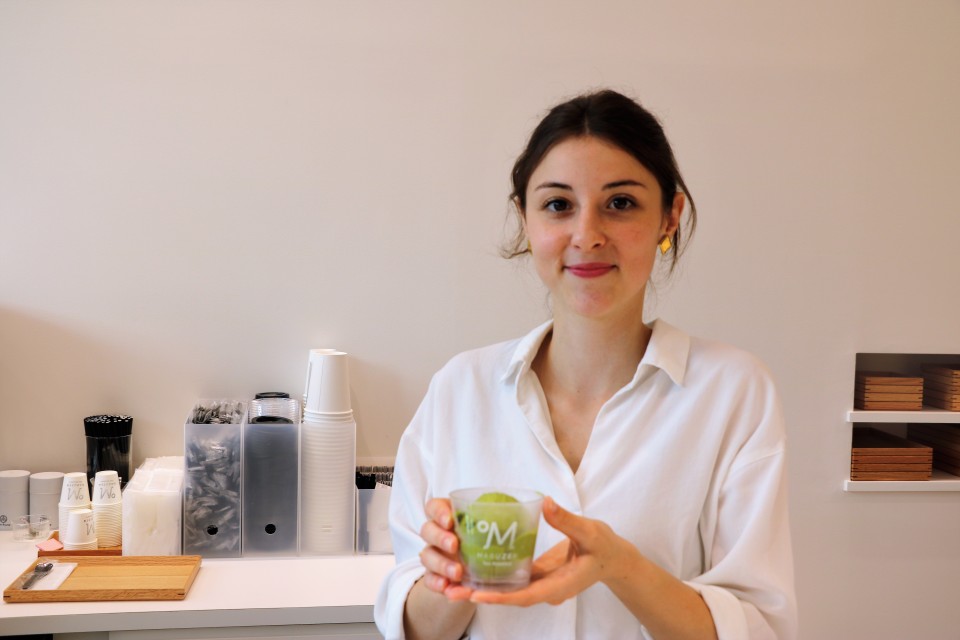 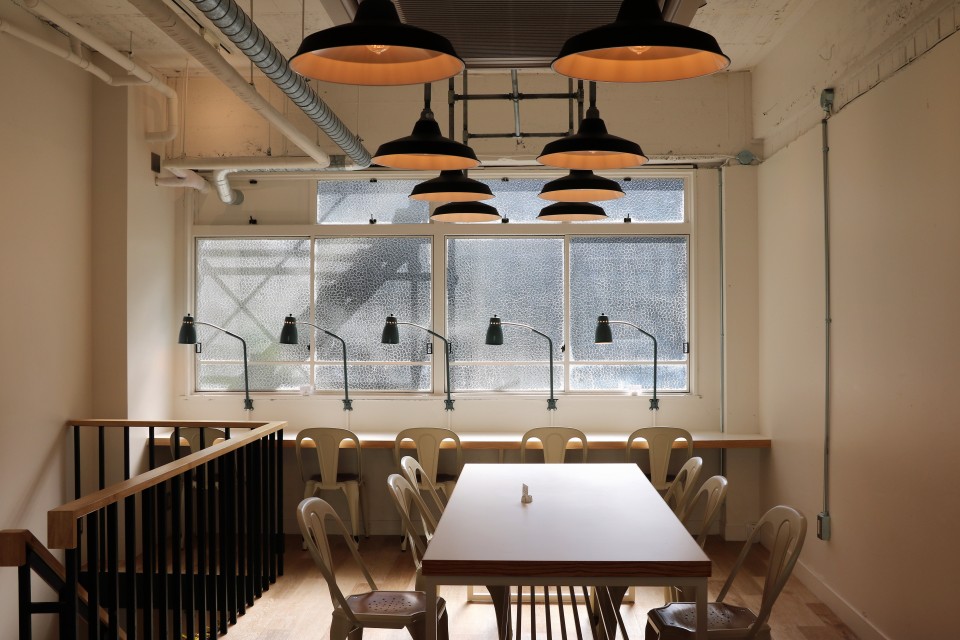