Osaka and surrounding areas in western Japan hit by a powerful earthquake on Monday are in a region where experts have long warned of the potential for major seismic activity.

The inland earthquake, with a preliminary magnitude of 6.1, occurred at a depth of around 13 kilometers shortly before 8 a.m., with its epicenter in the northern part of Osaka Prefecture in an area where active faults are concentrated.

Takuya Nishimura, an associate professor of geodetics at Kyoto University, said there was a possibility that the quake had occurred at the eastern end of a fault extending from the northern part of the prefecture to Awaji Island in Hyogo Prefecture.

This same fault line caused the Great Hanshin Earthquake that claimed more than 6,400 lives in 1995.

"It might be an aftershock resulting from distorted geological formations caused by the 1995 quake," Nishimura said, adding that another fault lying further north might also be behind the latest quake.

He said recent observations have found a high density of underground deformation along the Arima-Takatsuki fault zone.

Yasuhiro Suzuki, a professor of geomorphology at Nagoya University, also suspects the fault zone's involvement and believes that because the seismic origin was not deep the quake's intensity was very high in limited areas. 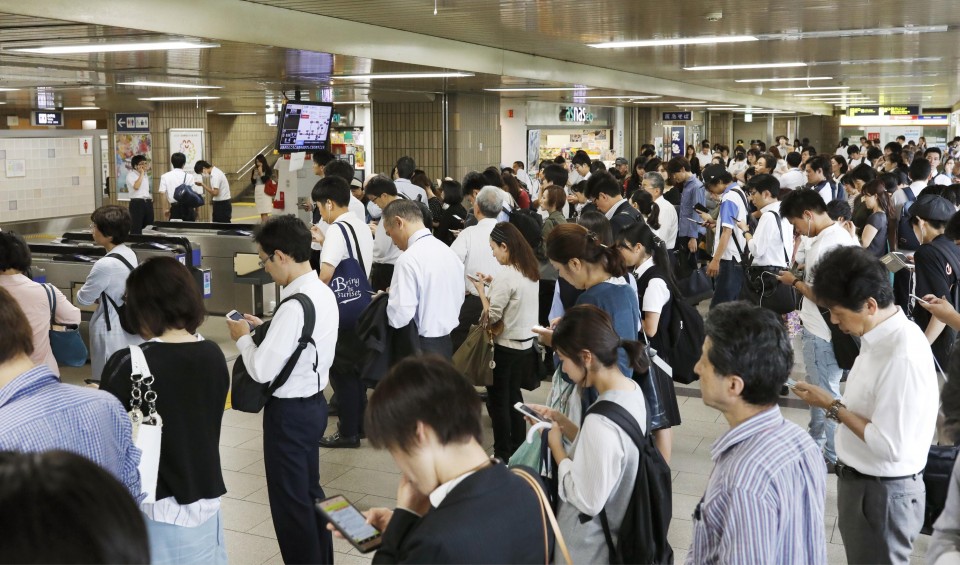 (People stranded in Hanyu Ikeda station in Osaka after the quake)

Shinji Toda, a professor of earthquake geology at Tohoku University, noted that a different fault running just under the city of Osaka from north to south might have something to do with Monday's deadly quake.

Toda said experts have regarded the fault as dangerous because it has been inactive for more than 10,000 years.

The Japan Meteorological Agency is warning that over one week there may be aftershocks that have around the same seismic intensity as Monday's quake, which registered lower 6 on the Japanese scale of 7.