The Cabinet on Friday approved a bill to allow Emperor Akihito to hand over the Chrysanthemum throne to Crown Prince Naruhito in what would be Japan's first abdication in roughly 200 years.

The government envisions December 2018, when the emperor turns 85 years old, as a possible timing for his abdication, and that the nation's "gengo" era name, which remains in use for the length of an emperor's reign, will likely change at the start of 2019, sources close to the matter have said.

The bill was specifically designed for the current emperor, so as to prevent others easily following suit. Securing stable succession amid a declining number of imperial family members, highlighted by the recent news of Princess Mako's impending engagement to a commoner, remains a challenge. 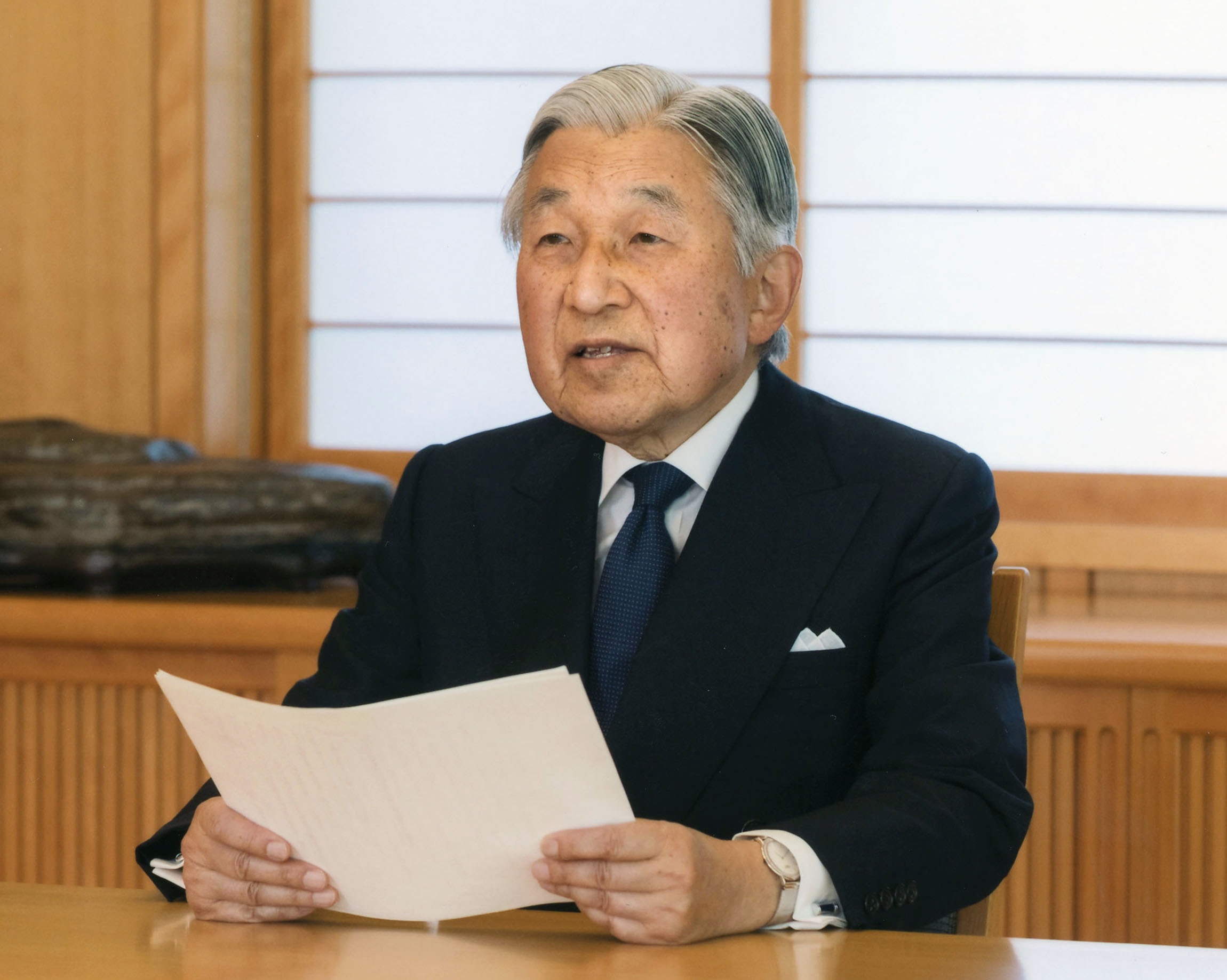 Princess Mako, the first grandchild of 83-year-old Emperor Akihito and the elder daughter of Prince Akishino, is expected to become a commoner after her marriage in accordance with the Japanese imperial law.

"The government is expecting the bill to be passed smoothly," Chief Cabinet Secretary Yoshihide Suga said at a press conference.

He declined to comment on the likely timing of the abdication, saying, "Discussions in the Diet will begin from now."

The bill states the public's "understanding" and "sympathy" for the aging emperor's "deep concern" about eventually becoming unable to fulfill his duties as a reason to set up the special-case abdication law.

The timing of the emperor's retirement will be set by a government ordinance after the enactment and promulgation of the abdication law.

Prime Minister Shinzo Abe's government launched preparations for a legal revision to enable the emperor to retire following his unusual televised address to the public last August signaling his desire to step down due to his advanced age and weakening health.

Currently, only posthumous succession is allowed as the Imperial House Law, which stipulates imperial matters, lacks a provision regarding abdication by an emperor.

The government avoided creating a permanent abdication system. It instead drafted a bill for one-off abdication legislation and a supplementary provision to the Imperial House Law to enable the special-case law to serve as a precedent for future emperors.

The bill was submitted to the Diet after the Cabinet's approval, with the government expecting the legislation to be enacted by the end of the current Diet session in mid-June.

But opinion remains divided among ruling and opposition parties over how and by when the government should come up with a solution to address the shrinking size of the imperial family.

The main opposition Democratic Party has been seeking the attachment of a special resolution to the abdication bill calling for deeper debate on enabling princesses to establish their own branches within the imperial family after they marry commoners.

But Abe's ruling Liberal Democratic Party has been reluctant, with conservatives within the party wary that allowing princesses to remain part of the imperial family after marriage could eventually pave the way for women to ascend the throne.

Princess Mako's expected marriage is set to reduce the number of imperial family members, including the emperor, to 18. Currently, there are only four heirs to the throne and Prince Hisahito, 10, Princess Mako's younger brother, is the only male member of his generation. The Imperial House Law stipulates that only male patrilineal descendants of emperors can ascend the throne.

A series of ritual ceremonies will be held over a period of a year for the accession of the new emperor. The government is also planning to hold an abdication ceremony for the first time in around two centuries by studying ceremonial practices in the past.

After Emperor Akihito relinquishes the Chrysanthemum throne, he will be called "joko," an abbreviation of "daijo tenno," a title that was given in the past to an abdicated emperor, according to the bill.

Empress Michiko will be given a new title, "jokogo," which means "wife of joko" after her husband's abdication.

Emperor Akihito's funeral ceremony and tomb will be equivalent in status to those of past emperors, the bill said, adding the Emperor's Birthday holiday on Dec. 23 will be changed to Feb. 23, the birthday of Crown Prince Naruhito, 57.

The timing of the abdication will be decided under an ordinance within three years after the law's promulgation after consulting with the Imperial House Council, whose members including the prime minister, the Supreme Court's chief justice and the Imperial Household Agency's grand steward, as well as two imperial family members, the bill said.

After the abdication, the emperor and empress are expected to move to Togu Palace in the Akasaka Estate in Tokyo's Minato Ward, where the crown prince and his family currently live, and the new emperor's family will move to the Imperial Palace in Tokyo's Chiyoda Ward.

Emperor Akihito's second son Prince Akishino, 51, will be next in line to the throne after the abdication. Prince Akishino's annual budget allocation for private expenses will increase threefold to 91.5 million yen ($822,000), according to the bill.

The bill was crafted after parties represented in the Diet agreed to allow the emperor's abdication under a one-off law and a government-commissioned panel endorsed the policy, both of which were decided through closed-door discussions, raising criticism in some corners that it was a foregone conclusion.

A recent poll conducted by Kyodo News showed 68 percent of respondents supported the creation of a permanent abdication system and 86 percent supported enabling a woman to ascend the throne.

The enactment of the legislation will make Emperor Akihito the first emperor to abdicate since Emperor Kokaku, who relinquished the throne in 1817.

But abdication became impossible under the former imperial house law set in 1889 out of concern that the coexistence of former and sitting emperors could create a harmful "dual power" system as history shows retired emperors can exercise considerable authority. The current Imperial House Law, set in 1947, maintains the rule.