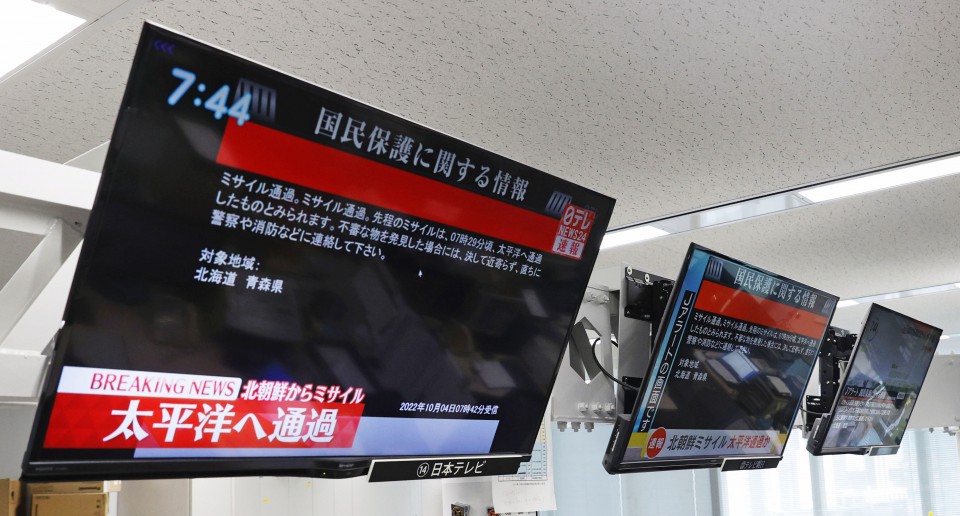 Television screens in Tokyo show a J-alert the Japanese government issued on the morning of Oct. 4, 2022, after North Korea fired a ballistic missile which appears to have flown over Japan. The government urged residents in Japan's northernmost main island of Hokkaido and the country's northeastern prefecture of Aomori to stay indoors. (Kyodo) ==Kyodo

TOKYO - North Korea on Tuesday fired a ballistic missile over the Japanese archipelago for the first time in five years, with the projectile reaching the longest distance ever for a missile launched by Pyongyang, the Japanese government said.

Japan's Defense Minister Yasukazu Hamada told reporters that North Korea's missile flew 4,600 kilometers -- putting it within reach of the U.S. territory of Guam, where key military bases are located -- at an altitude of 1,000 km.

TOKYO - The chairman of major publisher Kadokawa Corp. was charged Tuesday by prosecutors with bribing a then-Tokyo Olympic organizing committee executive in a move that will further deepen the scandal surrounding the Summer Games held last year amid the coronavirus pandemic.

Tsuguhiko Kadokawa, 79, was indicted for giving 69 million yen ($477,000) in bribes to the former executive, Haruyuki Takahashi, 78, in return for the company being selected as a sponsor of the games.

MALANG, Indonesia - The Indonesian government's decision to set up a fact-finding team to investigate a crowd stampede at a soccer match in East Java Province over the weekend that killed 125 people has failed to ease public anger and sadness over the tragedy.

The stampede occurred following an eruption of violence after rival teams Persebaya from the provincial capital of Surabaya beat Arema FC from Malang on Saturday night, prompting a number of angry Arema supporters to invade the pitch and chase after Persebaya players and officials.

TOKYO - North Korea's firing of a ballistic missile, which crossed over Japan on Tuesday for the first time in five years, is likely to compel Prime Minister Fumio Kishida to contemplate how to tackle military provocations by Pyongyang.

As the two Asian countries do not maintain diplomatic relations, it is believed Tokyo has not had contact with Pyongyang for years, given that they have been at odds over the unresolved abductions of Japanese nationals by North Korea in the 1970s and 1980s.

TOKYO - Japan on Tuesday ordered a Russian consul based in northern Japan to leave the country within six days in retaliation for Moscow's expulsion of a Japanese diplomat last month, Foreign Minister Yoshimasa Hayashi said.

Hayashi told reporters that his ministry declared the consul at the Russian Consulate General in Sapporo persona non grata after Russia's Federal Security Service detained a Japanese consul in Vladivostok for a few hours for alleged espionage and expelled him from the country.

CHIBA, Japan - A body was found in a river in Chiba Prefecture, near Tokyo, local authorities said Tuesday, and police are investigating whether it may be that of a 7-year-old girl who went missing on her way to a park about 10 days ago.

Local police and firefighters said the body was discovered in the Edo River, 15 kilometers downstream from where Saya Minami's shoes and socks were found on the riverbank on Sept. 24, the day after she went missing.

TOKYO - Japanese Prime Minister Fumio Kishida on Tuesday asked companies to aim for pay hikes that keep pace with accelerating inflation in wage negotiations next spring, as he seeks to achieve both economic growth and redistribution amid the rising cost of living.

Smoothing the way for wage growth, the government will expand subsidies for small and midsize firms on condition that they raise pay, according to a government plan.

TOKYO - Energy prices and a weak yen sent core consumer prices in Tokyo 2.8 percent higher in September from a year earlier, the fastest pace of increase in over three decades when excluding the effects of tax hikes, government data showed Tuesday.

The core consumer price index for Tokyo excluding volatile fresh food items rose for the 13th straight month, the Ministry of Internal Affairs and Communications said, in fresh evidence households are increasingly feeling the pinch of the rising cost of living.