North Korea's firing of a ballistic missile, which crossed over Japan on Tuesday for the first time in five years, is likely to compel Prime Minister Fumio Kishida to contemplate how to tackle military provocations by Pyongyang.

As the two Asian countries do not maintain diplomatic relations, it is believed Tokyo has not had contact with Pyongyang for years, given that they have been at odds over the unresolved abductions of Japanese nationals by North Korea in the 1970s and 1980s. 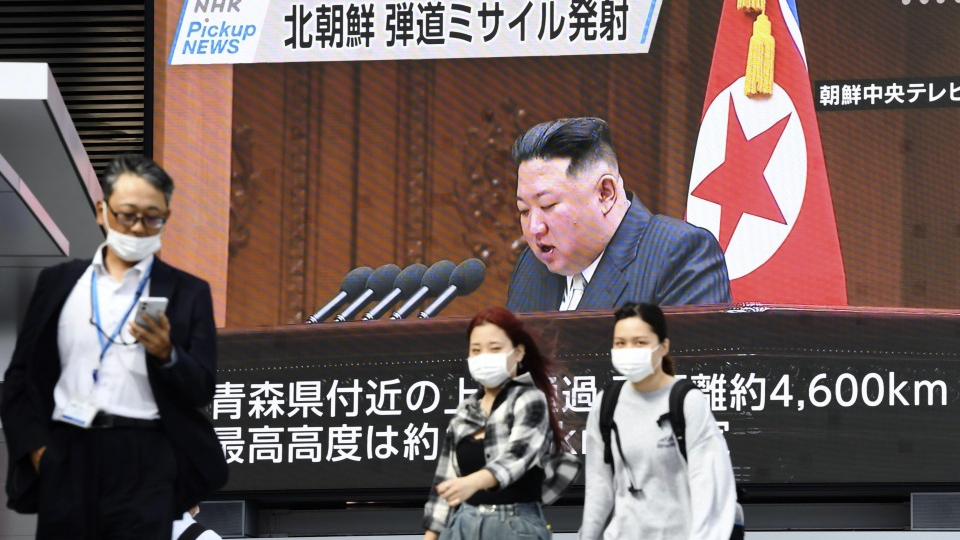 A large screen in Tokyo's Akihabara area shows news on Oct. 4, 2022, that a ballistic missile fired by North Korea has flown over Japan. (Kyodo)

Foreign affairs experts, however, said Kishida should seriously consider resuming communication with North Korea to urge leader Kim Jong Un to return to the negotiating table with the United States, Japan's closest security ally, for peace and stability in the Asia-Pacific region.

Talks on denuclearization and sanctions relief between the United States and North Korea have been at a standstill for around three years, with Pyongyang getting closer to China and Russia, which have hardened their anti-Western rhetoric amid tensions over Ukraine and Taiwan.

Since Pyongyang's negotiations with Washington broke down in 2019, North Korea has carried out a flurry of ballistic missile tests in violation of U.N. Security Council resolutions, while fears are growing that it may conduct its seventh nuclear test sometime soon.

Diplomatic sources warn that North Korea's actions are jeopardizing global security, with the U.N. Security Council dysfunctional and coordinated sanctions unlikely since Russia -- one of its five permanent members -- launched its invasion of Ukraine in late February.

The United States and North Korea remain technically in a state of war as the 1950-1953 Korean War ended in an armistice, not a peace treaty. 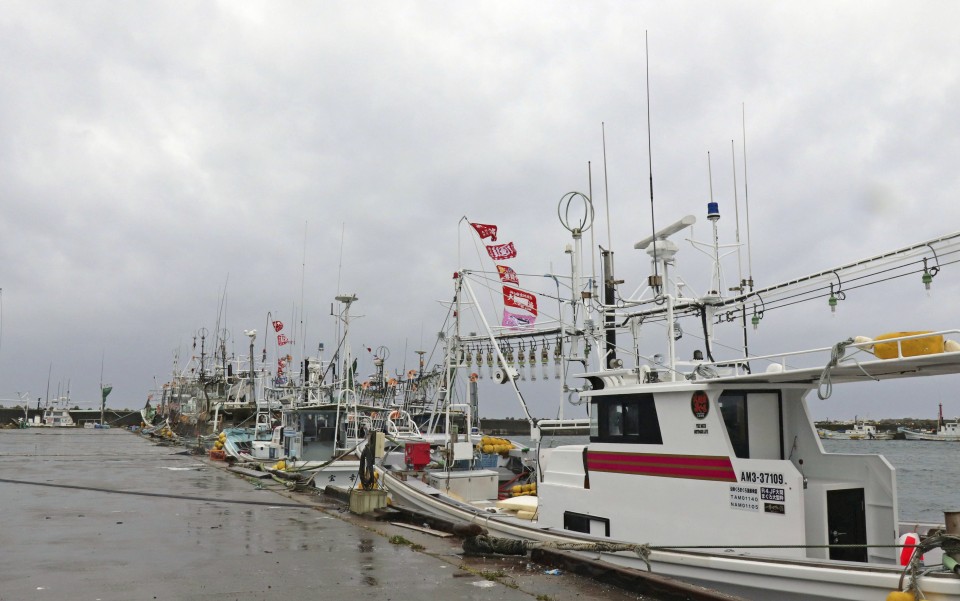 Photo taken on Oct. 4, 2022, shows fishing vessels at a port in the Aomori Prefecture town of Oma after a ballistic missile fired by North Korea flew over the northeastern Japan prefecture. (Kyodo) ==Kyodo

If China and Russia, traditionally friendly with North Korea, boost cooperation with Pyongyang to counter the post-Cold War international order dominated by the United States, the regional and global security situations would become "really dangerous," a diplomatic source said.

Although Kishida has expressed eagerness to hold a meeting with Kim "without conditions," Japan apparently has few means to directly interact with North Korea.

Tokyo has also said that several matters, including the abduction issue, must be resolved before relations can be normalized with North Korea based on the Pyongyang Declaration, which the leaders of the two nations signed in 2002.

"Japan should make efforts to resolve the abduction issue, but what it should do now is to attempt to bring North Korea back to talks with the United States in a bid to stabilize the security environment in the region," the source said.

The source added that Japan "should first try to normalize ties with North Korea" and work as an "intermediary" between Pyongyang and Washington, as Kishida is known as a more liberal-leaning politician who puts emphasis on promoting diplomacy through dialogue.

On Tuesday, North Korea fired what appeared to be a long-range ballistic missile over northeast Japan, the first it has sent across the Japanese archipelago since September 2017, just days after launching missiles toward the Sea of Japan.

Japan's Defense Minister Yasukazu Hamada told reporters that the missile flew 4,600 kilometers, the longest distance ever for an intermediate-range or longer one fired by North Korea, while reaching an altitude of 1,000 km.

Chief Cabinet Secretary Hirokazu Matsuno, the top government spokesman, voiced worries at a press conference that North Korea could engage in additional provocative actions, such as its first nuclear test since September 2017.

"North Korea is launching provocative missile tests to refine launch and delivery systems that may be used as a deterrence against the United States in the region and in the homeland," said Stephen Nagy, senior associate professor at International Christian University in Tokyo.

But Western countries are facing difficulties in discouraging North Korea from pushing ahead with its weapons tests. 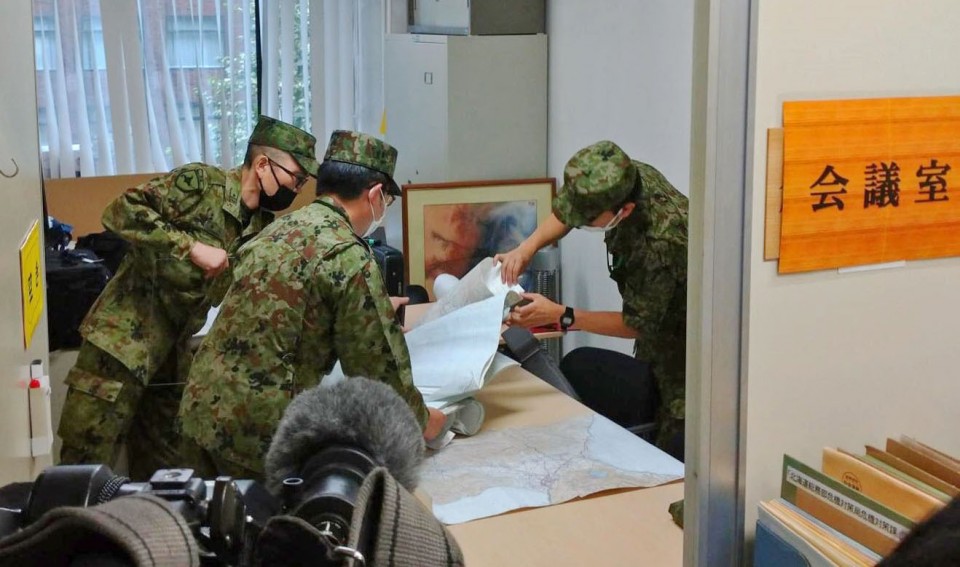 Japan Self-Defense Force personnel are pictured at the Hokkaido prefectural government headquarters in Sapporo, northern Japan, on Oct. 4, 2022, after North Korea fired a ballistic missile which appears to have flown over Japan. (Kyodo) ==Kyodo

In May, China and Russia vetoed a U.S.-drafted resolution distributed to U.N. Security Council members following Pyongyang's firing of an intercontinental ballistic missile in March, its first since November 2017.

It was the first rejection of a U.N. Security Council resolution aimed at preventing North Korea from developing nuclear weapons and missiles since 2006 when the first sanctions were adopted, underscoring the current Security Council dysfunction.

In early September, Kim was quoted by state-run media as pledging North Korea will never give up its nuclear weapons, alleging that the United States is aiming to bring about the eventual collapse of the Pyongyang regime.

Like Russia, China is among the five veto-wielding Security Council members.

"The crux of the current situation on the Korean Peninsula is that the legitimate and reasonable security concerns" of the North "have not been duly responded to," Mao said.

"We hope that all parties concerned on the issue of the Korean Peninsula will keep to the direction of seeking political settlement and address each other's concerns in a balanced way through dialogue and consultation," she added.

Another diplomatic source pinned hopes on Japan finding an avenue to restart U.S.-North Korea negotiations, as Washington cannot resume them amid its intensifying rivalry with Beijing and Moscow.

"Japan must find a way to communicate with Pyongyang and persuade the United States and North Korea to resume talks and contain security threats in the region," the source said.

North Korea has shown no signs of wanting to hold a meeting with Japan, while insisting that the abduction issue has been "already resolved."