The Indonesian government's decision to set up a fact-finding team to investigate a crowd stampede at a soccer match in East Java Province over the weekend that killed 125 people has failed to ease public anger and sadness over the tragedy.

The stampede occurred following an eruption of violence after rival team Persebaya from the provincial capital of Surabaya beat Arema FC from Malang on Saturday night, prompting a number of angry Arema supporters to invade the pitch and chase after Persebaya players and officials.

Almost 500 people were injured. Thirteen cars, including 10 police vehicles, were set on fire during one of the world's deadliest stadium riots. 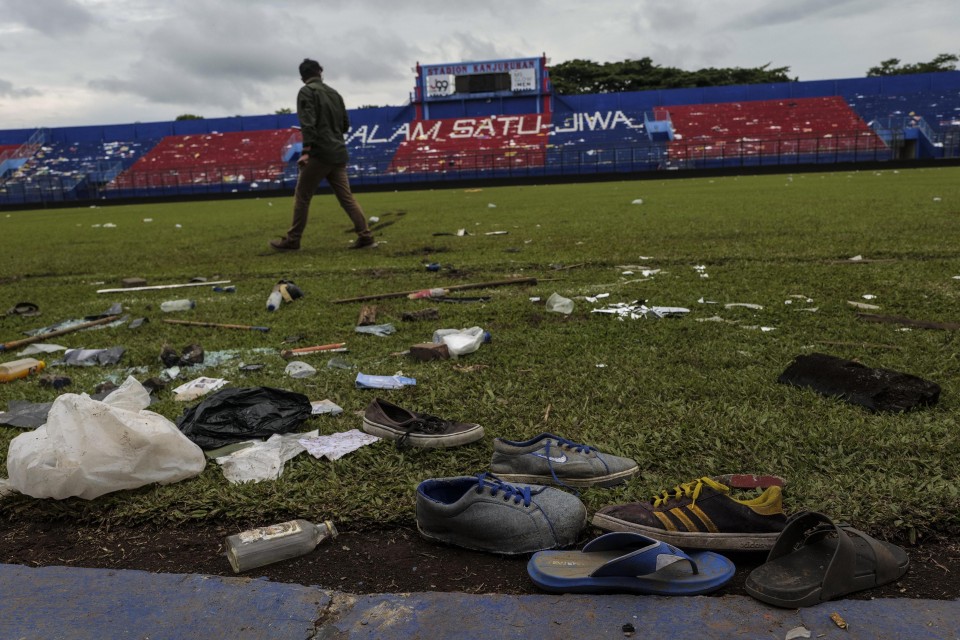 Shoes and other belongings left inside Kanjuruhan Stadium are pictured on Oct. 3, 2022, in Malang, Indonesia. (Getty/Kyodo)

Sadness and anger were on display at candle-lit vigils across the country. Hundreds of soccer fans gathered outside the country's biggest stadium in Jakarta, chanting "Murderers! Murderers!" as they laid blame on the police for the tragedy.

The police's decision to fire tear gas canisters into the over-packed stadium, triggering spectators to rush for the exits, has been widely criticized, while match organizers have been slammed for failing to take precautionary measures.

Sulastri recalls the moments before she fainted after inhaling tear gas while trying to escape the stadium.

After supporters invaded the pitch, the spectator area where she and her husband were seated was still calm. But then the crowd began rushing to the gates, despite them not being fully open. Usually, dozens of exit gates are opened before the end of a match. Security forces also fired tear gas into the pitch. Later, screams and cries could be heard in the stadium.

"My eyes stung. I could hardly breathe before I lost consciousness," Sulastri said.

The 50-year-old woman never imagined that the match she and her husband had been anticipating for years after COVID-related postponements would end in chaos, causing the loss of her 40-year-old husband Wahyudi.

"I regretted my decision to watch this match," said 23-year-old Yuni Tri Wahyuni who lost her childhood friend in the tragedy. With tears on her cheeks, she recalled how she witnessed her friend fall down near an exit before being trampled to death by the crowd.

About 42,000 spectators packed the 38,000-person-capacity stadium. All of them were Arema supporters, as the organizer had banned Persebaya Surabaya fans due to frequent brawls between supporters of the two clubs. 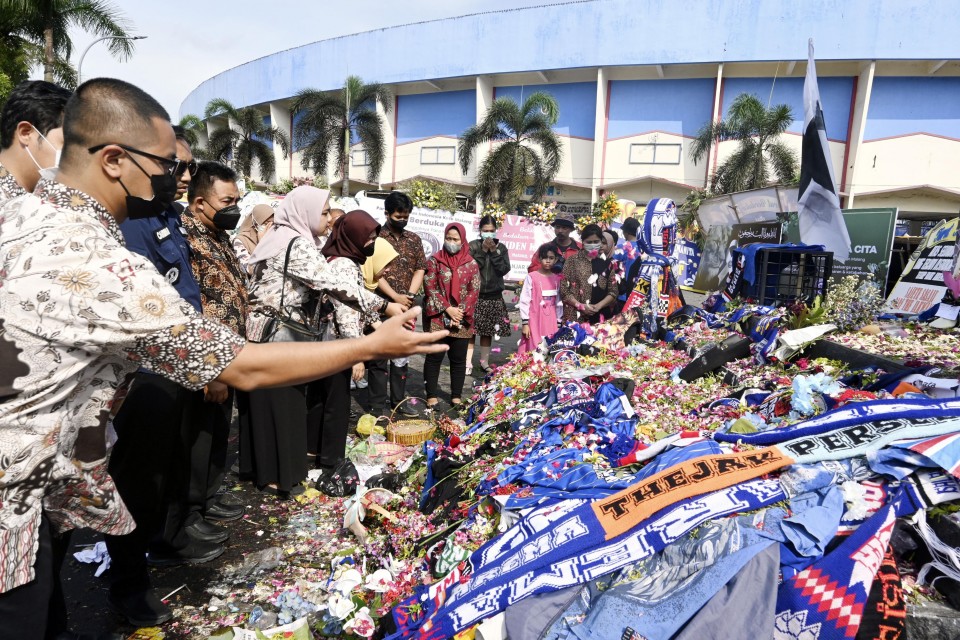 People offer flowers at the monument for Arema FC in Malang in Indonesia's East Java Province on Oct. 4, 2022, three days after 125 people were killed in a crowd stampede at a soccer match there. (Kyodo)

Preliminary investigations showed that doors, which "were supposed to be opened at the time of the incident, were still closed," according to Erwin Tobing, head of the disciplinary committee of the All Indonesian Soccer Association.

National Police Spokesman Dedi Prasetyo separately said that the exit doors "are quite narrow and can only be passed by two persons but were flocked by hundreds of people trying to run out."

The committee imposed sanctions on two Arema officials, banning them from "doing any activities related to soccer for life," Tobing said.

The club is also "banned from holding any match with spectators and a match must be held at a minimum distance of 250 kilometers from the home base," Tobing added.

On Monday, the government set up a fact-finding team, consisting of representatives from soccer organizations and experts, as well as related ministries and institutions, to investigate the stampede.

The team "is expected to complete its task within two to three weeks," Coordinating Minister for Political, Legal and Security Affairs Mahfud MD told a press conference.

On the same day, the National Police announced they are investigating 28 security personnel for ethics breaches when dealing with the riots. At least nine members of the police elite unit Mobile Brigade have also been suspended over their roles in the incident, while the local police chief was dismissed from his position.

(Christine Tjandraningsih contributed to this story from Jakarta)