Japanese Prime Minister Fumio Kishida on Tuesday asked companies to aim for pay hikes that keep pace with accelerating inflation in wage negotiations next spring, as he seeks to achieve both economic growth and redistribution amid the rising cost of living.

Smoothing the way for wage growth, the government will expand subsidies for small and midsize firms on condition that they raise pay, according to a government plan. 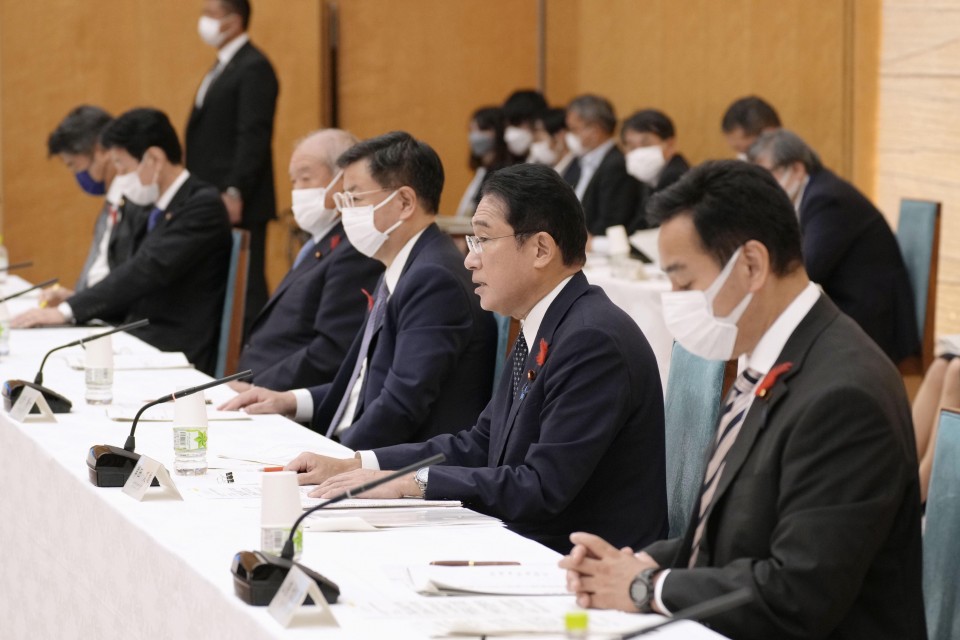 Prime Minister Fumio Kishida (2nd from R) speaks at a government meeting on realizing "a new form of capitalism" in Tokyo on Oct. 4, 2022. (Kyodo)

It will also prod bigger companies to accept higher prices set by subcontractors by making public the names of those that refuse to do so repeatedly or without providing justification.

"I hope negotiations will take place between management and labor unions to realize pay hikes that can make up for inflation," Kishida told a government panel meeting on creating a "new form of capitalism."

The request was included in a list of priority items that will go into a new economic package to be compiled later this month. Kishida has already instructed officials to focus on three areas -- coping with inflation and a weak yen, spurring wage growth, and achieving growth through investment and reform.

Wage growth is critical for Kishida's stated policy of promoting wealth redistribution and for the Bank of Japan, which has shown no signs of changing its ultralow rate policy.

The plan does not give a specific numerical target, but Japan's core consumer inflation, which excludes volatile fresh food, has been accelerating toward 3 percent. For this year's annual negotiations between management and labor unions, Kishida called for major Japanese firms that had seen their earnings recover to pre-pandemic levels to raise wages by 3 percent or more.

In the end, Japanese firms agreed to an average 2.07 percent pay raise, topping the 2 percent threshold for the first time in three years, according to data from the Japanese Trade Union Confederation, or Rengo.

The plan discussed Tuesday at the meeting also seeks to reform the country's labor market over the medium- to long-term by promoting a shift from seniority-based pay, still prevalent in Japan, to one that is based more on job descriptions and responsibilities.

The government aims to invest 1 trillion yen ($6.9 billion) over the next five years in human resource development by enabling people to learn new skills and making changing jobs easier.

Fostering startups in Japan is another key area for growth as Kishida wants to see stepped-up efforts by Japanese firms to solve social challenges that can lead to economic growth.

The government will aim for at least one startup spawned at each national university to launch an initial public offering.