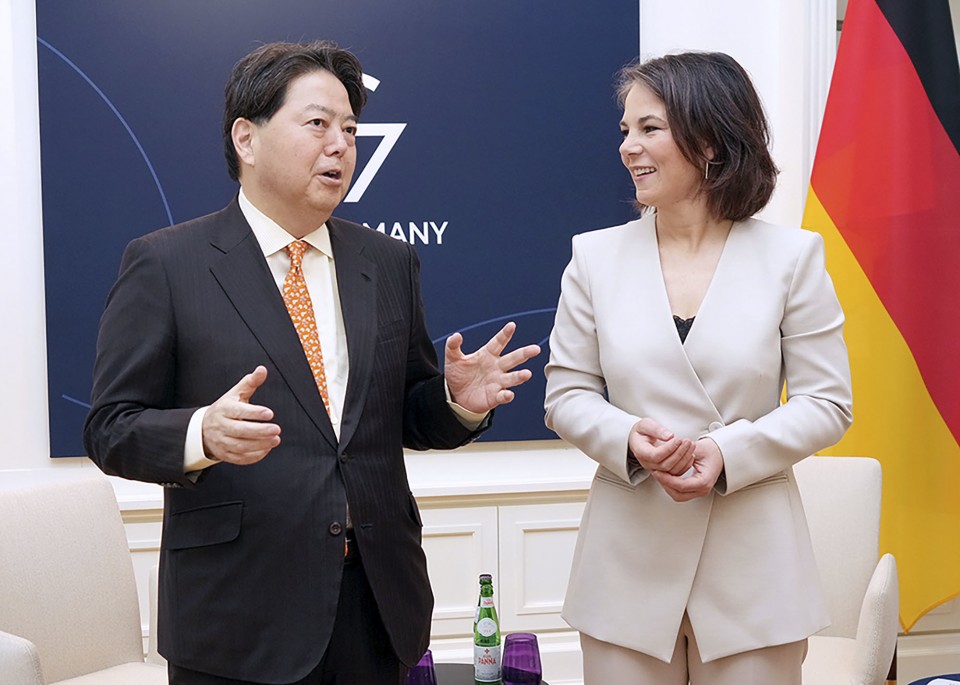 Peace march held in Okinawa ahead of 50th anniv. of return to Japan

NAHA, Japan - A peace march calling for the burden on Okinawa from hosting U.S. forces to be reduced was held Saturday in the southern island prefecture, a day before the 50th anniversary of its reversion to Japan.

WEISSENHAUS, Germany - Foreign ministers from the Group of Seven major developed nations are expected to say Saturday they are prepared to roll out additional economic sanctions against Russia over its invasion of Ukraine when they wrap up a three-day meeting in Germany.

The top diplomats from Britain, Canada, France, Germany, Italy, Japan and the United States, plus the European Union, will also affirm their unity in support for the Ukrainian people and nearby nations hosting refugees, according to Japanese government officials.

BEIJING - North Korea on Saturday reported 21 new deaths of those who were suspected of having been infected with the novel coronavirus, prompting leader Kim Jong Un to say that the nation is in the greatest upheaval since its founding in 1948.

The official Korean Central News Agency said more than 174,440 people had fever on Friday, underscoring that the virus has been drastically spreading since the country held nationwide events on the occasion of anniversaries in April, including a vast military parade.

WASHINGTON - The leaders of the United States and the Association of Southeast Asian Nations on Friday declared that they will elevate their relationship to a "comprehensive strategic partnership" later this year amid China's growing clout in the region.

China has preceded the United States in upgrading its relations with the 10-member group to a similar status, and the latest development reflects intensifying competition between Beijing and Washington for influence in the fast-growing Southeast Asian region.

WEISSENHAUS, Germany - The foreign ministers of Japan and Ukraine agreed Friday that the international community should remain united in maintaining strong sanctions against Russia over its invasion of Ukraine, now in its third month with the war showing no signs of easing.

During talks with his Ukrainian counterpart Dmytro Kuleba in Weissenhaus, northern Germany, Foreign Minister Yoshimasa Hayashi said Russia must be "held accountable over its atrocities," calling its actions "unacceptable," the Japanese Foreign Ministry said in a statement.

TOKYO - China has pulled out of hosting next year's Asian Cup due to the COVID-19 pandemic, the Asian Football Confederation said Saturday.

"Following extensive discussions with the Chinese Football Association (CFA), the AFC has been officially informed by the CFA that it would not be able to host the AFC Asian Cup," a statement read.