Foreign ministers from the Group of Seven nations pledged Saturday to strengthen economic sanctions on Russia over its military aggression on Ukraine and to stand in unity to support the Ukrainian people.

In a joint statement issued after their three-day talks in Weissenhaus in northern Germany, the G-7 also agreed to take measures to ease the war's repercussions such as energy and food supply disruptions and to speed up efforts to phase out their dependence on Russian energy resources.

"We reaffirm our determination to further increase economic and political pressure on Russia, continuing to act in unity," the G-7 ministers from Britain, Canada, France, Germany, Italy, Japan and the United States plus the European Union said in the statement. 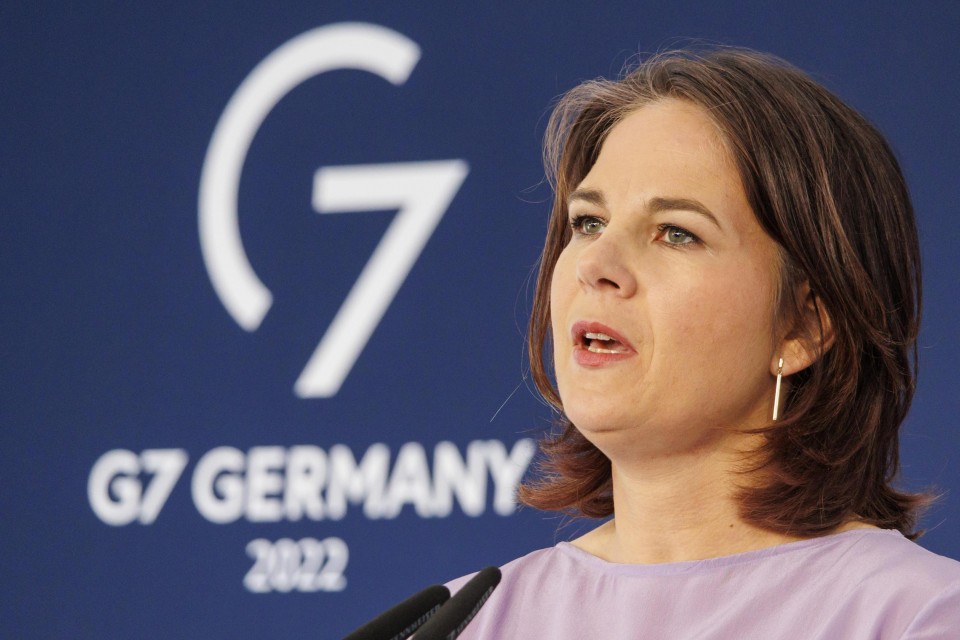 German Foreign Minister Annalena Baerbock speaks at a press conference after the meeting of foreign ministers of the G7 member states at the Schlossgut Weissenhaus venue on May 14, 2022 near Oldenburg in Holstein, Germany. (Getty/Kyodo)

"We will broaden our sanctions measures to include sectors on which Russia has a particular dependence," they added.

The G-7 ministers also highlighted that they are "steadfast" in their solidarity with Ukraine and support for it, and will continue military assistance "as long as necessary."

The seven leading democracies have already implemented various punitive measures including freezing assets of Russian President Vladimir Putin and the country's central bank, along with excluding some major Russian lenders from a key international payment network known as SWIFT.

As the latest effort, the G-7 leaders last Sunday stated their commitment to phasing out their dependency on Russian oil in their latest attempt to put more pressure on Moscow, which launched military attacks on Ukraine on Feb. 24.

The G-7 foreign ministers said they will expedite their efforts to "reduce and end reliance on Russian energy supplies as quickly as possible," and will accelerate the energy transition and enhance energy efficiency.

Russia is one of the world's leading oil and gas exporters, while Ukraine is a major producer of grains such as wheat and corn. German Foreign Minister Annalena Baerbock told reporters ahead of the three-day talks that a Russian blockade at the Black Sea has been impeding shipment of 25 million tons of Ukrainian grain.

"We reaffirm our commitment to protect the most vulnerable countries and people suffering from Russia's war against Ukraine and its global repercussions," the statement said.

In a separate communique, the G-7 called on China not to "assist" Russia, "undermine" ongoing sanctions and "justify" Russian actions.

They also reiterated the need for maintaining a "free and open" Indo-Pacific region, a vision advocated by Tokyo and Washington and widely seen as a counter to Beijing's growing military and economic influence in the region.

The meeting was intended to lay the groundwork for a G-7 summit scheduled for June 26 to 28 at Schloss Elmau, a castle resort in southern Germany.

The ministers of Ukraine and its neighbor Moldova, which has accepted a flood of refugees from the war-torn country, attended part of the discussions.

Moldova is concerned about the spillover effect of Russia's invasion on Transnistria, a pro-Moscow breakaway region in its eastern part bordering Ukraine.

The G-7 foreign policy chiefs aired their concern about the "recent attempts to destabilize" the Moldovan region, in an apparent condemnation on Russian-backed activists, and underscored their support for "Moldova's stability, sovereignty and territorial integrity."

Indonesian Foreign Minister Retno Marsudi also joined part of the talks online, as the Southeast Asian nation hosts meetings this year of the Group of 20 major economies, which include Russia as well as China and the G-7 nations.