The foreign ministers of Japan and Ukraine agreed Friday that the international community should remain united in maintaining strong sanctions against Russia over its invasion of Ukraine, now in its third month with the war showing no signs of easing.

During talks with his Ukrainian counterpart Dmytro Kuleba in Weissenhaus, northern Germany, Foreign Minister Yoshimasa Hayashi said Russia must be "held accountable over its atrocities," calling its actions "unacceptable," the Japanese Foreign Ministry said in a statement. 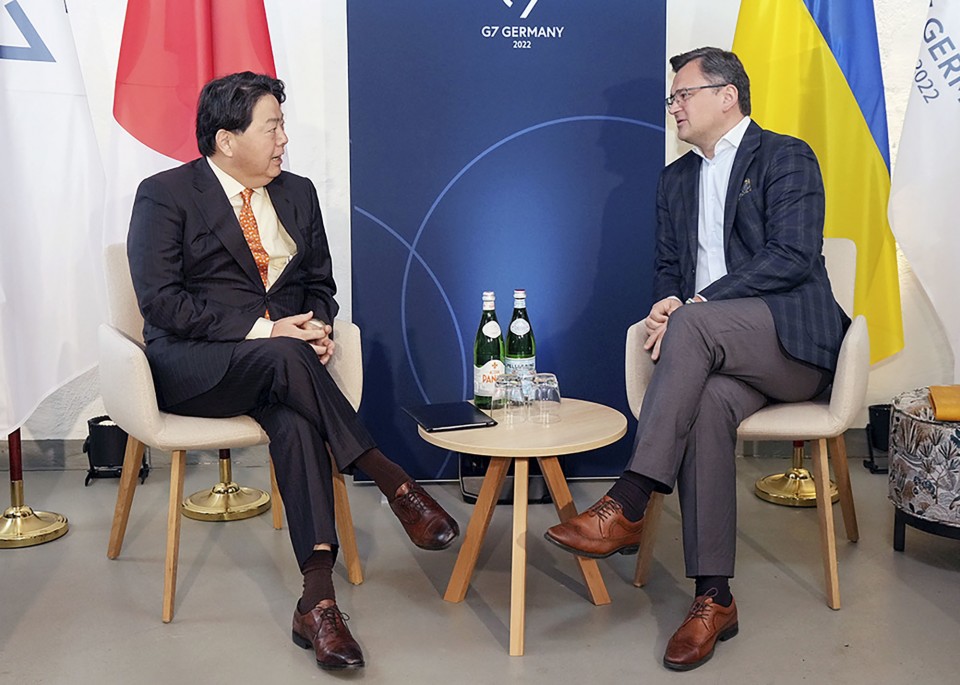 Moscow is under scrutiny by a human rights panel of the United Nations over alleged human rights violations committed by Russian troops in northeastern regions of Ukraine.

Their talks came as Group of Seven major developed nations have been ramping up pressure on Moscow, tightening economic sanctions against it and pledging to reduce their reliance on Russian energy resources. Russia launched military attacks on its neighbor on Feb. 24.

Meeting on the sidelines of the three-day G-7 foreign ministerial meeting through Saturday, Kuleba was quoted by the ministry as telling Hayashi that Ukrainian President Volodymyr Zelenskyy very much appreciates the recent decision by Japan to phase out Russian oil imports.

Hayashi and Baerbock shared the view that the security of Europe and the Indo-Pacific region are inseparable, and that any attempts to unilaterally alter the status quo by force are unacceptable anywhere in the world, the ministry said.

Japan will take over the G-7 chairmanship next year.

In his talks with Popescu, Hayashi applauded Moldova, which shares borders with Ukraine, for accepting many Ukrainian refugees despite its small population. Popescu explained the situation over Transnistria, a pro-Russian breakaway region in eastern Moldova where tensions are rising following the Russian invasion of Ukraine, according to the ministry.

Ukraine, along with Moldova and Indonesia, has been invited to join part of the discussions during the G-7 foreign ministerial gathering.

The G-7 is made up of Britain, Canada, France, Germany, Italy, Japan and the United States, plus the European Union.