North Korea on Saturday reported 21 new deaths of those who were suspected of having been infected with the novel coronavirus, prompting leader Kim Jong Un to say that the nation is in the greatest upheaval since its founding in 1948.

The official Korean Central News Agency said more than 174,440 people had fever on Friday, underscoring that the virus has been drastically spreading since the country held nationwide events on the occasion of anniversaries in April, including a vast military parade.

Kim said at a key meeting of the ruling Workers' Party of Korea on Saturday that North Korea should "study well the epidemic prevention policies" of China, adding the nation can "overcome the crisis" if it keeps the "strong organizing ability." 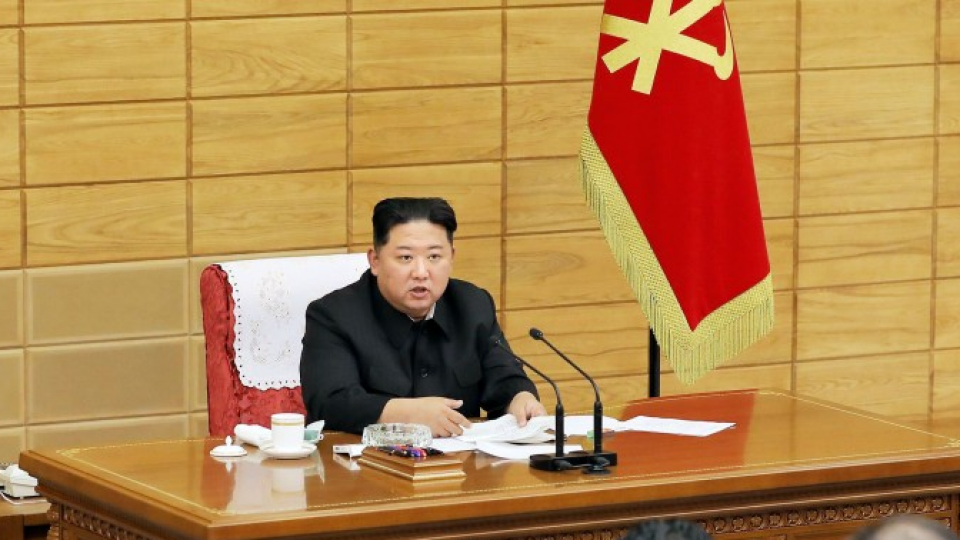 North Korean leader Kim Jong Un attends a meeting held by the Political Bureau of the Central Committee of the ruling Workers' Party of Korea in Pyongyang on May 14, 2022. (KCNA/Kyodo)

"The public health crisis facing us is also attributable to the incompetence, irresponsibility and least role of the party organizations in the epidemic prevention work," Kim was quoted by the news agency as saying.

Kim is likely to call on China to provide aid and medical equipment, such as COVID-19 vaccines, to North Korea, foreign affairs experts said. China is North Korea's closest and most influential ally economically, accounting for more than 90 percent of its trade.

Saturday's report came as North Korea may carry out its seventh nuclear test or launch an intercontinental ballistic missile, which could be capable of delivering a nuclear warhead to anywhere in the continental United States, in the near future.

The latest spread of the virus could cause difficulties to North Korea in conducting a nuclear test as China has not supported Pyongyang's nuclear test, which would raise worries about possible radioactive contamination from the neighboring country, some analysts said.

North Korea on Thursday reported its first coronavirus case since the pandemic began. Kim instructed officials to thoroughly block all cities and counties across the nation and boost measures to curb the outbreak.

Since late April, the overall number of deaths has increased to 27 and cases of fever to over 524,440 in North Korea. The origin of the fever has not been identified. At least 280,810 people were being treated and more than 243,630 people had fully recovered, KCNA said.

Freight train operations between North Korea and China, meanwhile, resumed in January after a plunge in bilateral trade apparently weighed on North Korea's economy, making it more difficult for its people to receive adequate food and daily necessities.

Despite the COVID-19 pandemic, several massive public events were held in North Korea in April on various anniversaries, in which most of the participants did not wear protective face masks.

North Korea is seen to be vulnerable to infectious diseases due largely to chronic shortages of food and medical supplies as a result of international economic sanctions aimed at thwarting Pyongyang's nuclear and ballistic missile ambitions.

North Korea was expected to receive vaccines from Britain's AstraZeneca Plc through a U.N.-backed COVAX facility in May 2021, but the plan was postponed as the country was unwilling to follow the instructions by the program.