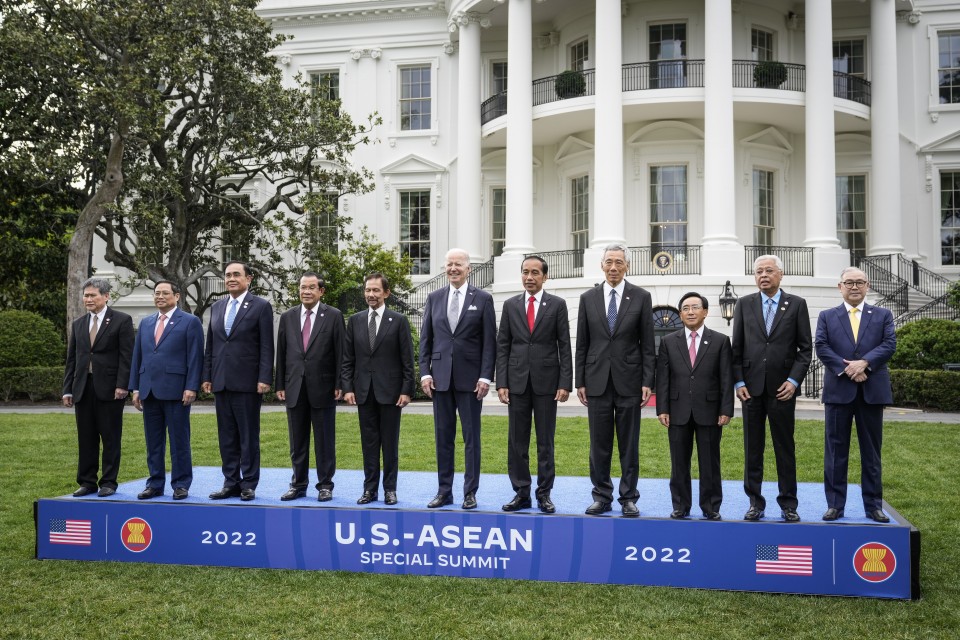 U.S. President Joe Biden (C) and leaders of the Association of Southeast Asian Nations pose for photos for the U.S.-ASEAN Special Summit on the South Lawn of the White House on May 12, 2022, in Washington. (Getty/Kyodo)

WASHINGTON - The leaders of the United States and the Association of Southeast Asian Nations on Friday declared that they will elevate their relationship to a "comprehensive strategic partnership" later this year amid China's growing clout in the region.

China has preceded the United States in upgrading its relations with the 10-member group to a similar status, and the latest development reflects intensifying competition between Beijing and Washington for influence in the fast-growing Southeast Asian region.

U.S. President Joe Biden told a meeting with his counterparts in Washington, "We're launching a new era in U.S.-ASEAN relations," while welcoming the 45th anniversary of their ties this year.

Placing an emphasis on ASEAN is the "very heart" of U.S. strategy to achieve a free, open and prosperous Indo-Pacific, Biden said, alluding to the strategically important region straddling key sea lanes including the South China Sea where Beijing is making extensive territorial claims.

It was the first time that the United States has hosted ASEAN leaders in Washington. The multilateral organization comprises Brunei, Cambodia, Indonesia, Laos, Malaysia, Myanmar, the Philippines, Singapore, Thailand and Vietnam.

All ASEAN leaders except those of Myanmar, where a military junta took control, and the Philippines, which will have a new president soon, took part in the two-day summit through Friday.

A joint statement issued afterward said, "We commit to establish an ASEAN-U.S. Comprehensive Strategic Partnership that is meaningful, substantive, and mutually beneficial at the 10th ASEAN-U.S. Summit in November 2022."

As part of efforts to show its commitment to ASEAN, the Biden administration pledged over $150 million of investment for maritime security, infrastructure and other initiatives.

The administration is also hoping to launch soon the Indo-Pacific Economic Framework, a regional engagement initiative that it has proposed in the fall amid the United States' absence from major free-trade agreements in the region.

While a senior administration official has said he was "pleasantly surprised at the level of interest" from countries in Southeast Asia and beyond over what is called IPEF, the joint statement did not mention the name of the framework.

Trade experts say it is vital to bring in Southeast Asian nations to the framework. But concerns remain as to whether it will be attractive enough for them as the administration has been clear it will not be a traditional free trade agreement that offers market access.

They also called for the "immediate cessation of violence" in Myanmar following its military coup last year, and vowed to redouble efforts toward "a peaceful solution" in the Southeast Asian nation.

As the Biden administration rallies countries around the world to support Ukraine in its fight against Russia's invasion, the joint statement called for "respect for sovereignty, political independence, and territorial integrity."

But it did not explicitly name Russia, reflecting the division among ASEAN members over the stance on the war that started in late February.

Cambodia, which chairs the 10-member group this year, and seven other members were among the 141 countries that voted in March for a U.S.-led U.N. General Assembly resolution condemning Russia's aggression against Ukraine.

Vietnam, which has maintained friendly ties with Russia since its Soviet Union days, and Laos were among the 35 abstentions.

China is ASEAN's biggest trade partner, but its assertive behavior has also created friction, with Beijing having conflicting territorial claims with four members of the bloc -- Brunei, Malaysia, the Philippines and Vietnam -- as well as Taiwan in the South China Sea.

The unexpected Russian military aggression in Europe has also sent ripples across the Indo-Pacific region, raising concerns among countries such as Japan that the next Ukraine could be Taiwan, which Beijing views as a renegade province to be reunified with mainland China, by force if necessary.