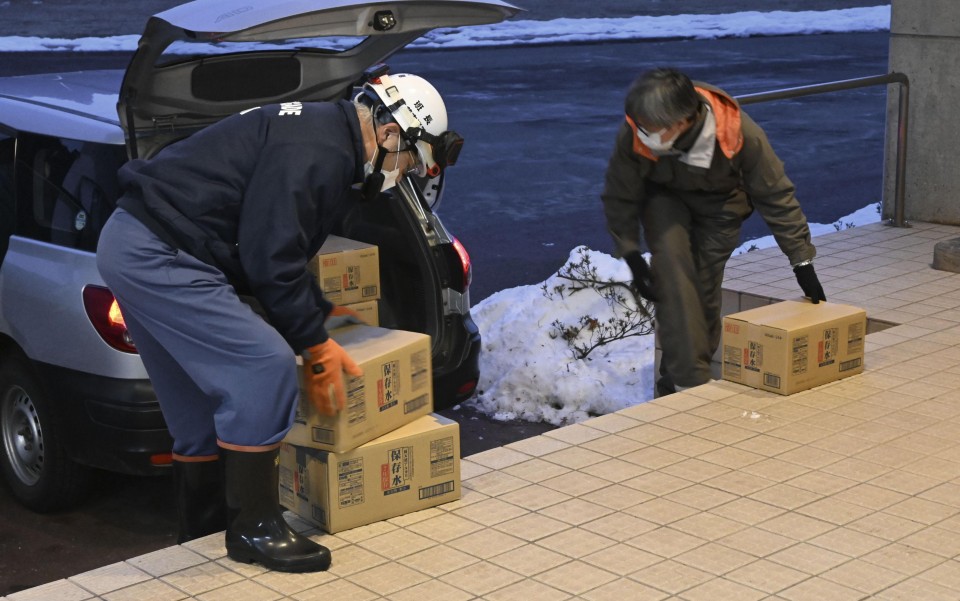 Workers bring food and other supplies to those gathering at a welfare center, which became an evacuation site, in Kuji in Iwate Prefecture, northeastern Japan, after a tsunami warning was issued early on Jan. 16, 2022. (Kyodo) ==Kyodo

TOKYO - Japan saw tsunami waves of about 1 meter high in coastal areas on Sunday but no major damage or flooding after the eruption of an underwater volcano off Tonga led to evacuation orders for nearly 230,000 citizens.

Japan's weather agency issued tsunami warnings and advisories in the early hours for the Pacific coast from Hokkaido to Okinawa, but these were all lifted in the afternoon, after around 14 hours.

SYDNEY - Tennis star Novak Djokovic on Sunday lost a second legal challenge against the cancellation of his Australian visa, dashing hopes for the men's world No. 1 to compete in the Australian Open starting the next day.

The Serbian player is facing immediate deportation and a three-year ban on re-entry, after the Federal Court of Australia upheld the second cancellation of his visa in a unanimous court ruling in the evening, with the reasons for the decision to be shared in the coming days.

TOKYO - Japan's confirmed daily coronavirus cases on Sunday topped 20,000 for the third consecutive day, as the country continues to battle with the rapid spread of the Omicron variant.

The tally comes a day after new infections nationwide almost reached the record high number of 25,992 registered on Aug. 20 last year, when the country was reeling from the worst of the fifth wave of infections.

BEIJING - A freight train from North Korea arrived in China's border city of Dandong on Sunday after a long interval caused by the coronavirus pandemic, sources close to the matter said, but it remains uncertain whether the two countries will resume trade in a full-fledged manner anytime soon.

North Korea, which claims no COVID-19 cases have been found in the country, has cut off land traffic to and from China due to worries that the virus, first detected in the central Chinese city of Wuhan in late 2019, could enter its territory.

TOKYO - Japan's gross domestic product per capita will fall behind that of South Korea in 2027 and Taiwan in 2028, according to a recent projection by a Tokyo-based research institute, citing long-term low productivity on the back of slow progress in digitalization of the world's third-largest economy.

The inflation-unadjusted nominal GDP, the total value of goods and services produced in the nation, per person is projected at $46,519 in South Korea in 2027 and $47,305 in Taiwan in 2028, compared to the $45,607 and $46,443 forecast for Japan in the respective years, according to estimates released last month by the Japan Center for Economic Research or JCER.

The two-time Olympic silver medalist sealed the result with his first run of the final, earning 93.25 points after setting the tone from his opening trick, a front-side double cork 1440 indy, involving four full rotations and two sideways inversions.