Japan saw tsunami waves of about 1 meter high in coastal areas on Sunday but no major damage or flooding after the eruption of an underwater volcano off Tonga led to evacuation orders for nearly 230,000 citizens.

Japan's weather agency issued tsunami warnings and advisories in the early hours for the Pacific coast from Hokkaido to Okinawa, but these were all lifted in the afternoon, after around 14 hours. 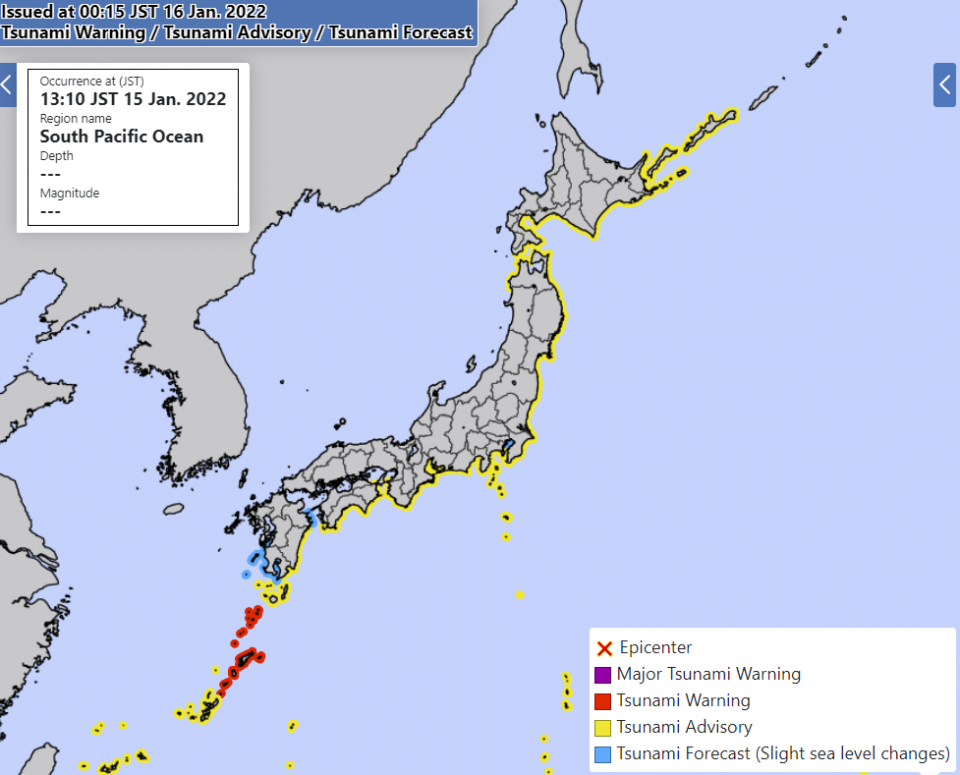 The agency said slight sea-level fluctuations may continue for some time, but there is no risk of disaster. However, it cautioned over marine activities such as those done underwater and fishing.

While there were no serious human casualties, some fishing boats were capsized and the warnings caused delays or cancellations to public transport.

Up to 229,000 people in eight prefectures -- Aomori, Iwate, Miyagi, Chiba, Tokushima, Kochi, Miyazaki and Kagoshima -- were asked to flee from the seaside, according to the Fire and Disaster Management Agency.

Some high school students in the prefectures who were to sit for the 2-day nationwide university entrance examinations from Saturday had to adjust to new time schedules.

A 1.2-meter wave was observed on Amami Island in Japan's southwest shortly before Saturday midnight, while a 1.1-meter one later arrived in Iwate Prefecture in the northeast which was affected by the deadly earthquake and ensuing tsunami more than a decade ago.

Residents of Kamaishi in the prefecture, one of the cities hardest hit by the disaster in 2011, quickly made their way to a temple on higher ground after a tsunami warning was issued around 3 a.m. Sunday.

"We evacuated just in case. It brought back memories of the (2011) earthquake and made us feel uneasy," said 79-year-old Jiro Saito, who left on foot with his wife. 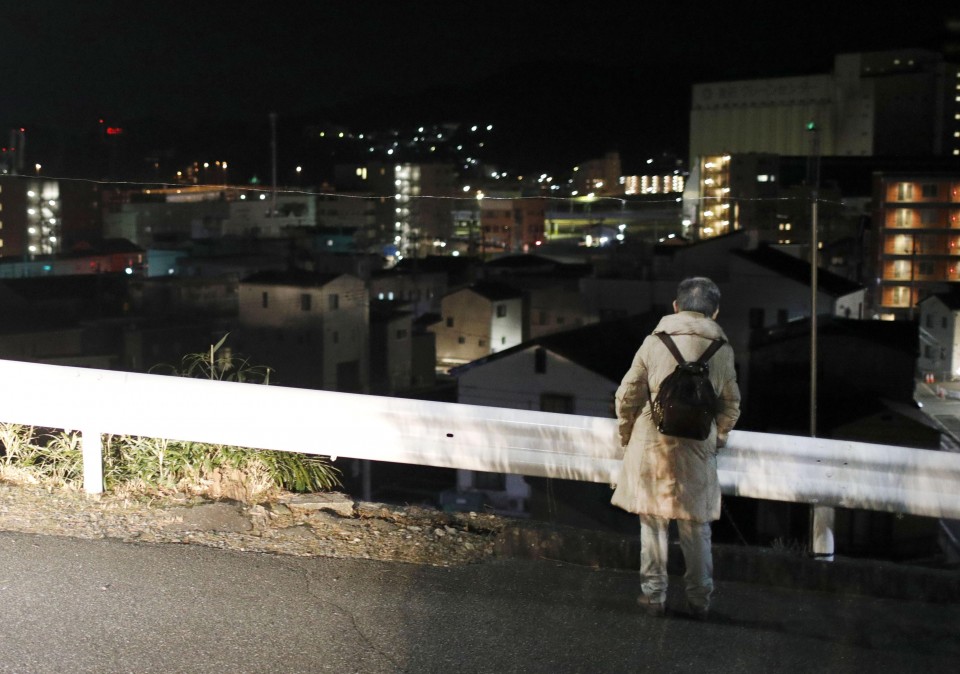 A woman looks toward the coast from higher ground in Kamaishi in Iwate Prefecture, northeastern Japan, after a tsunami warning was issued on Jan. 16, 2022. (Kyodo) ==Kyodo 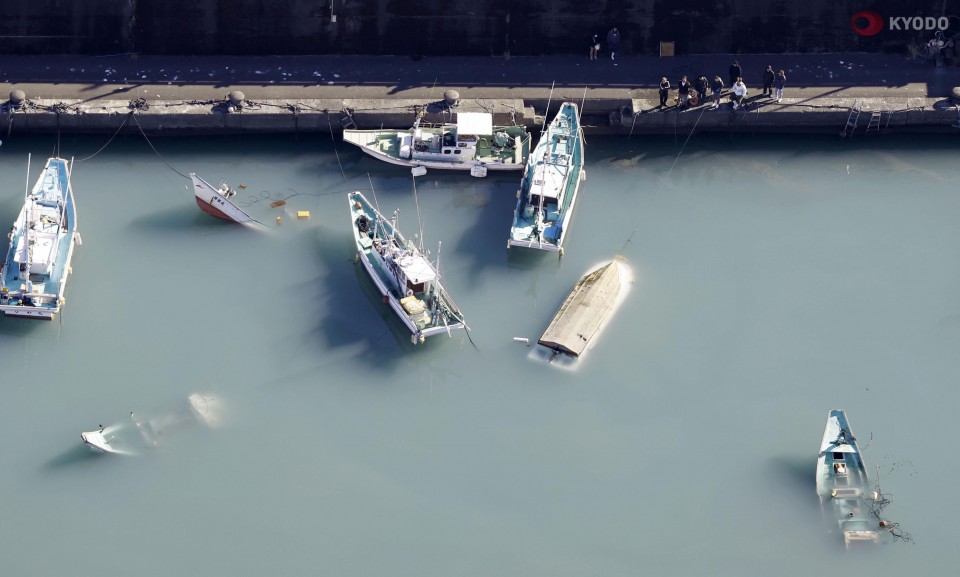 Photo taken Jan. 16, 2022, from a Kyodo News helicopter shows capsized and partially submerged boats at the port of Muroto in Kochi Prefecture, western Japan, after the country's Pacific coast was hit by a tsunami. (Kyodo) ==Kyodo

Train, air and maritime transport services were affected, with 27 Japan Airlines domestic flights including to and from Amami canceled. A total of 22 ships in Kochi Prefecture, western Japan, were found to have capsized or drifted.

Concerns about tsunami across the Pacific from the massive volcano eruption on Saturday afternoon that prompted residents on Tonga to evacuate have largely abated, but the extent of the damage remains unknown.

As communication with the South Pacific island country remained significantly cut off, neighboring countries were trying to discover the extent of damage or casualties.

New Zealand Prime Minister Jacinda Ardern said that communication due to the eruption has been difficult.

"As yet there are no official reports of injuries or deaths," Ardern said in a press conference, although contact has not yet been made with outer islands and coastal areas beyond the capital Nuku'alofa.

Ardern added there have been "significant" impacts on the foreshore on the northern side of the capital, citing reports that boats and large boulders had been washed ashore. No official damage assessments are available yet, however.

A volcano about 65 kilometers north of Nuku'alofa erupted Saturday, with the entire island nation reportedly hit by tsunami as high as 80 centimeters. Other Pacific islands and the United States also observed tsunami, but there have been no reports of major damage or casualties.

Nuku'alofa has been covered in a thick film of volcanic dust, sparking concerns around access to clean drinking water and respiratory issues.

Ardern reportedly said the undersea cable has been impacted, and New Zealand officials are trying to establish what was needed.

Tsunami of about 1 meter reached New Zealand, which is near Tonga, and more than 1 meter for Pacific islands such as Vanuatu, as well as Chile.

In Alaska and California, tsunami waves of more than 1 meter were also observed, according to the U.S. National Oceanic and Atmospheric Administration. 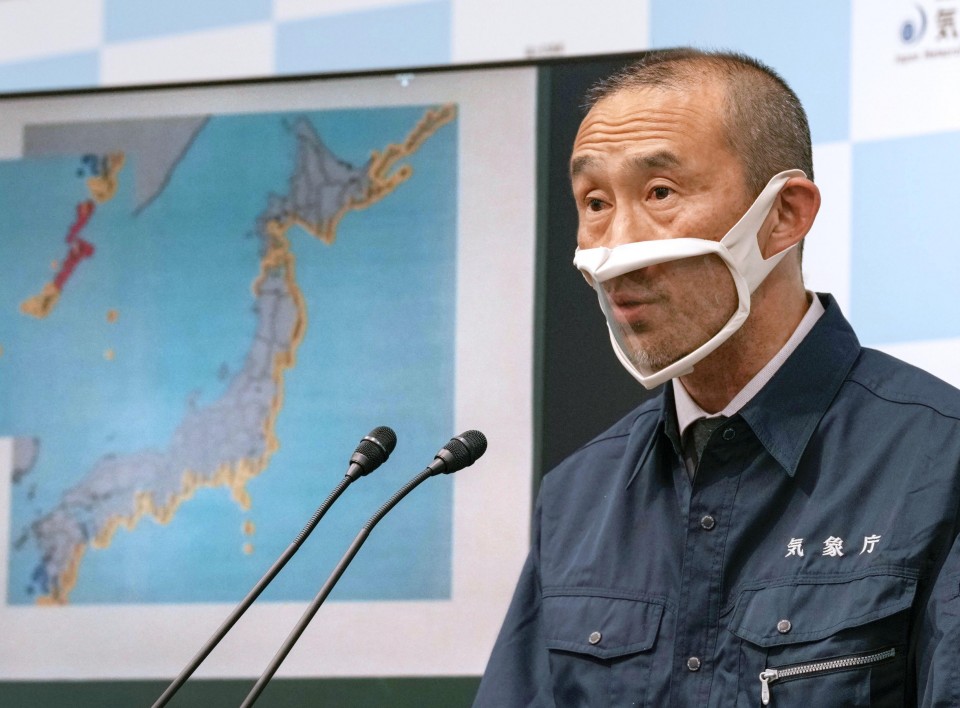 A Japan Meteorological Agency official speaks at a press conference in Tokyo in the early hours of Jan. 16, 2022. Japan's Pacific coast was hit by a tsunami following a massive underwater volcanic eruption in the South Pacific island country of Tonga the previous day. (Kyodo) ==Kyodo