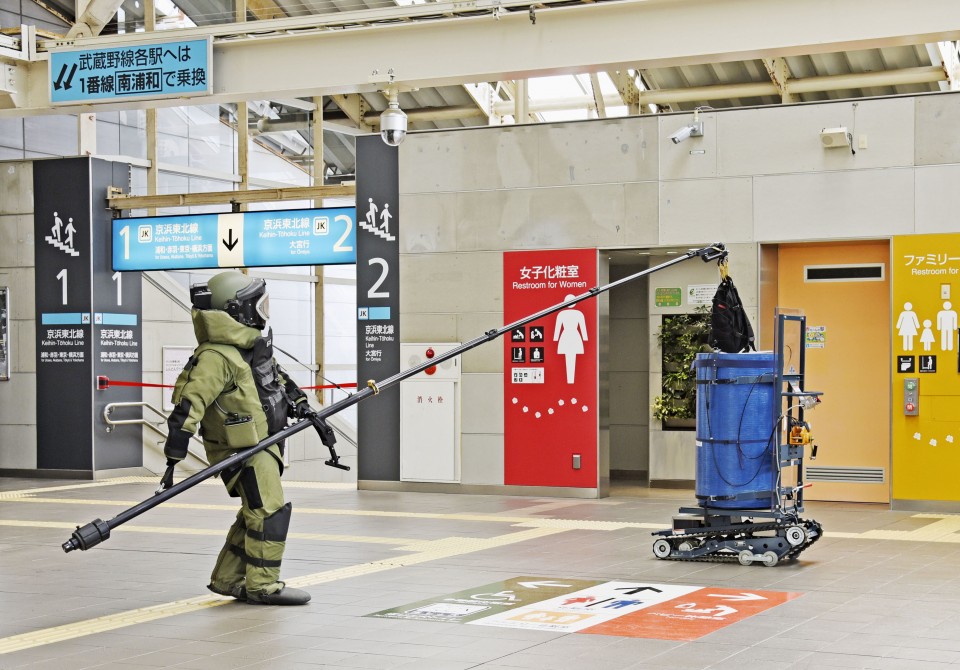 Police officers and JR East staff conduct a bomb-disposal drill at a JR station near Saitama Super Arena, the venue of Tokyo Olympics basketball games, in Saitama, eastern Japan, on June 3, 2021, about 50 days ahead of the opening of the Olympics. (Kyodo) ==Kyodo

TOKYO - The Japanese government will prioritize students hoping to attend university abroad in the COVID-19 vaccine rollout ahead of the new semester from September, sources with knowledge of the matter said Thursday.

The move comes as some schools in countries such as the United States have adopted requirements for students to be inoculated before they are allowed to participate in in-person classes.

The House of Representatives passed a bill to revise the law on childcare leave to create a special scheme allowing fathers to take a total of four weeks off within eight weeks of childbirth and, if they want, divide the period into two. The House of Councillors earlier approved the bill.

TOKYO - The Japanese government is making final arrangements to provide Taiwan with about 1.2 million doses of the COVID-19 vaccine developed by Britain's AstraZeneca Plc, government sources said Thursday, as the self-ruled island struggles to procure shots.

"There is an urgent need for Taiwan (to procure vaccine) until it can establish a domestic production system in July," Foreign Minister Toshimitsu Motegi said in parliament earlier in the day. According to the sources, Japan could supply the doses possibly on Friday.

TOKYO - About 95 percent of Japanese athletes competing at the Tokyo Olympics are expected to be vaccinated for COVID-19, a top official said Thursday, just 50 days before the opening of the event.

The plan was unveiled by Japanese Olympic Committee President Yasuhiro Yamashita at a time when Japan's vaccination rate is still very low compared with many other developed countries.

NEW YORK - Naomi Osaka earned $60 million over the past 12 months, $23 million more than last year, as she maintained her place as the top-earning female athlete ever, Forbes said Wednesday.

The U.S. magazine, which releases a list of the top-earning celebrities every year, also said that the Japanese tennis star is ranked 12th among the world's 50 highest-paid athletes, up from No. 29 last year, in the newest ranking to be published on Friday.

TAIPEI - Taiwan on Thursday urged China on the eve of the 32nd anniversary of the bloody crackdown on pro-democracy demonstrators in Tiananmen Square to implement political reforms and refrain from suppressing its people's demand for democracy.

In a statement, the Mainland Affairs Council called on Beijing to initiate people-centered political reforms and stop suppressing the demand of the Chinese people for democracy.

BEIJING - North Korea's ruling party stipulated its new No. 2 post under leader Kim Jong Un as "deputy of the general secretary," when it revised its rules in January, sources familiar with the matter said Thursday.

Speculation is growing that the leader's closest aide has already assumed the position called "first secretary" of the Workers' Party, but some pundits say the party may be leaving the post vacant in case of an emergency such as Kim's health deterioration.

TOKYO - The organizing committee of this summer's Tokyo Olympics unveiled an environmentally-friendly medal podium on Thursday and other items that will be used during victory ceremonies, as the Japanese capital marked 50 days to go until the major international sporting event.

At an event that was also streamed online, the organizers introduced the navy-colored checkered podium, which was made from recycled plastic, as well as costumes made from recycled fibers and medal trays to be used by volunteers who will take part in the ceremonies.