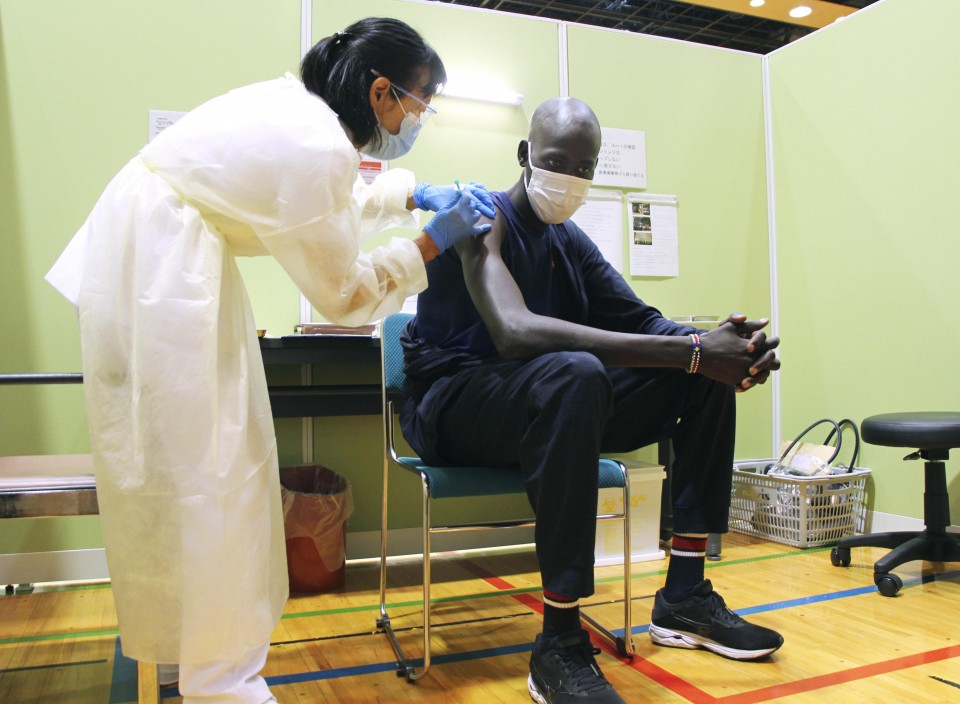 South Sudanese athlete Guem Abraham (R), who will compete in the men's 1,500 meters at the Tokyo Olympics, is vaccinated against the coronavirus in Maebashi, Gunma Prefecture, on June 16, 2021. The South Sudanese delegation for the Tokyo Olympics and Paralympics came to Japan in November 2019 to escape difficult training conditions in the war-torn African country. (Kyodo) ==Kyodo

Japan to cap spectators at 10,000 after COVID-19 state of emergency

TOKYO - The Japanese government plans to allow up to 10,000 spectators at events in areas where it has lifted a COVID-19 state of emergency, the minister in charge of the coronavirus response said Wednesday, a rule expected to apply to the upcoming Tokyo Olympics.

Yasutoshi Nishimura said the new attendance cap will be in place from July to August. Existing guidelines allow a maximum of 5,000 people or 50 percent of a venue's capacity, whichever number is greater, until the end of this month.

BEIJING - China said Wednesday that the radiation level at a nuclear reactor increased in the wake of fuel rods being damaged, but it is within the prescribed limits, and there is no radioactive leakage.

China's Ministry of Ecology and Environment also denied a CNN report that the safety authority has raised the acceptable limits for radiation detection around the Taishan Nuclear Power Plant in Guangdong Province to avoid shutting it down.

TOKYO - Japan's parliament enacted a law Wednesday tightening regulations on the acquisition and use of land around infrastructure deemed vital to national security, such as Self-Defense Forces bases and nuclear plants.

The House of Councillors passed a bill in the early hours of Wednesday despite strong resistance by some opposition parties who said the bill could excessively impinge on individual rights and give the government power to apply it arbitrarily.

Sung Kim, who was named U.S. special envoy for North Korea last month, is expected to attend the meeting to be held in South Korea, the source said, adding that the focus will be on whether he will attempt to make contact with the North Korean side in Panmunjeom, a village inside the demilitarized zone separating the two Koreas, during his trip.

TOKYO - Japan's exports in May jumped 49.6 percent from a year ago to post the sharpest rise in over four decades, with their rebound from a coronavirus pandemic-induced downturn driven by solid demand for cars and auto parts, government data showed Wednesday.

Exports of goods surged to 6.26 trillion yen ($57 billion) in the reporting month, increasing at the fastest pace since a record 51.4 percent leap was logged in April 1980, according to the preliminary data released by the Finance Ministry, which began compiling the statistics in January 1979.

TAIPEI - Taiwan expressed regret on Wednesday over the Macau government's decision to follow in Hong Kong's footsteps in suspending its representative office in Taiwan.

The Macao Economic and Cultural Office in Taiwan said on its website Wednesday that it will suspend its operations starting Saturday without specifying its reasons.

TOKYO - Japan's parliament wrapped up a 150-day ordinary session on Wednesday after the ruling coalition rejected calls from the opposition for a three-month extension to respond to the novel coronavirus pandemic.

A day earlier, the main opposition Constitutional Democratic Party and three other parties submitted a no-confidence motion against Prime Minister Yoshihide Suga's Cabinet for not extending the regular session, but it was voted down by members of the ruling Liberal Democratic Party, its junior coalition ally Komeito and others.