Japan's parliament wrapped up a 150-day ordinary session on Wednesday after the ruling coalition rejected calls from the opposition for a three-month extension to respond to the novel coronavirus pandemic.

A day earlier, the main opposition Constitutional Democratic Party and three other parties submitted a no-confidence motion against Prime Minister Yoshihide Suga's Cabinet for not extending the regular session, but it was voted down by members of the ruling Liberal Democratic Party, its junior coalition ally Komeito and others.

The development points to the increased likelihood of Suga dissolving the House of Representatives for a general election in early September after the Tokyo Olympics starting next month and before the lower house members' terms expire on Oct. 21. 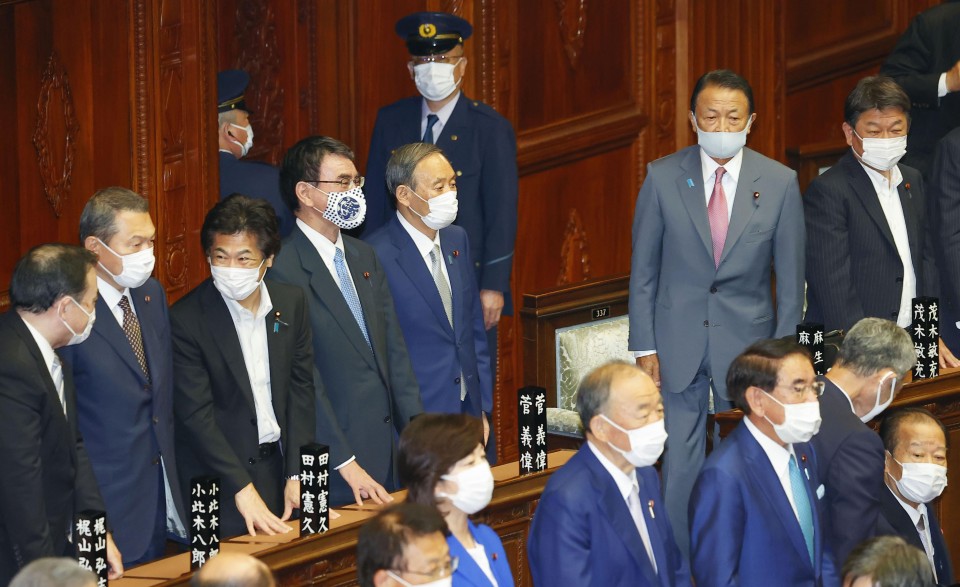 Although LDP Secretary General Toshihiro Nikai had suggested before the motion was submitted that he would advise Suga to dissolve the lower chamber for a general election, the premier said his priority was on fighting the coronavirus.

The CDPJ has requested holding committee sessions to discuss the coronavirus response while parliament is in recess. Such sessions were held about once a week after last year's regular Diet session similarly ended without an extension in June 2020.

A total of 61 out of 63 bills submitted to the Diet were enacted into law during this session.

They include a bill to establish a new agency to facilitate the country's digitalization and one for introducing fines for people and businesses that do not comply with restrictions imposed to prevent the spread of the novel coronavirus.

Following a last-minute effort, a bill for tightening regulations on the acquisition and use of land around infrastructure deemed vital to national security was enacted in the early hours of Wednesday.

The LDP, however, gave up on submitting a bill for protecting the rights of sexual minorities despite calls for its enactment during this session ahead of the Olympics.

The end of the regular Diet session, which started Jan. 18, came as Japan's capital and other areas remain under a COVID-19 state of emergency, with vaccination efforts picking up speed but most of the population not yet covered.

Suga's Cabinet has faced criticism over its handling of the coronavirus pandemic and a slew of scandals that have further weakened public support.

A Kyodo News poll held in mid-May showed 47.3 percent disapproved of Suga's Cabinet, the highest figure since the launch of his administration last September, with an overwhelming 71.5 percent dissatisfied with its coronavirus response.

Lagging behind other developed nations, Japan's COVID-19 vaccination drive started in February targeting medical personnel first, then those aged 65 and above from April. The scope is now being expanded to those aged 64 and younger.

The government has so far declared a state of emergency over the virus pandemic three times, including one in April last year under the previous administration of Prime Minister Shinzo Abe. As a result, many people have become accustomed to the contingency and are less prone to taking anti-virus measures.

During the parliament session, the Suga government has faced a number of scandals including wining and dining of communications ministry officials that involved the premier's eldest son Seigo Suga as well as a vote-buying scandal centering on former Justice Minister Katsuyuki Kawai and his wife Anri Kawai.