The Japanese government plans to end the COVID-19 state of emergency covering Tokyo and eight other prefectures on Sunday as scheduled, while Okinawa will remain under the restrictions until mid-July, sources with knowledge of the matter said Wednesday.

The move comes as infections have declined nationwide, with Prime Minister Yoshihide Suga rushing to set the stage for a "safe and secure" Tokyo Olympics and Paralympics from July 23.

The other eight prefectures set to exit the state of emergency are Hokkaido, Aichi, Kyoto, Osaka, Hyogo, Okayama, Hiroshima and Fukuoka. 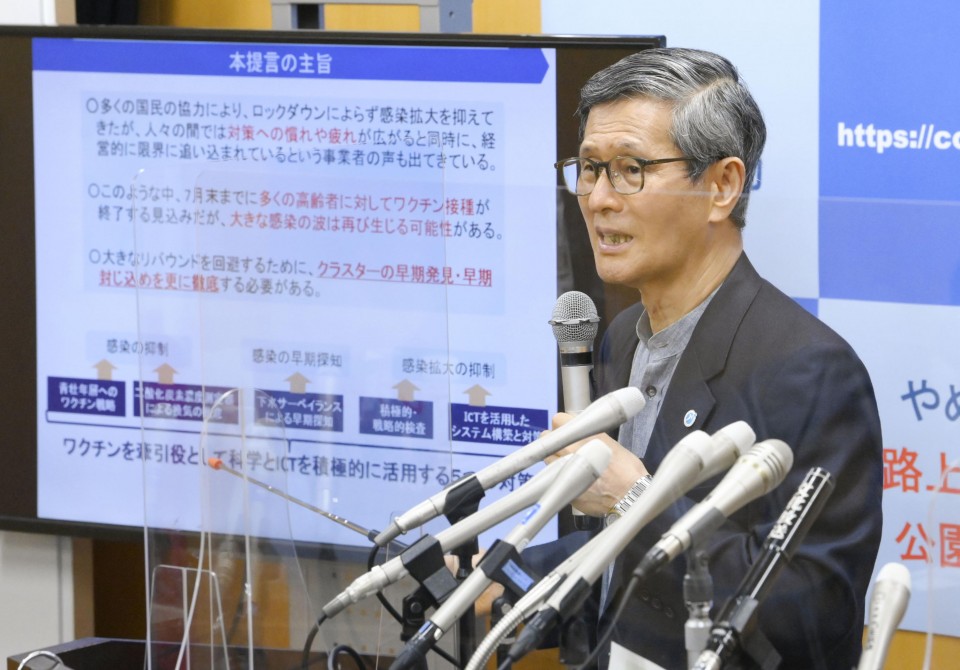 Infectious disease expert Shigeru Omi speaks at a press conference in Tokyo on June 16, 2021, following a meeting of the Japanese government's coronavirus advisory panel that he heads. (Kyodo) ==Kyodo

All except Okayama and Hiroshima will shift to a quasi-state of emergency until July 11. Restrictions on serving alcohol, currently banned, will be allowed until 7 p.m., while restaurants will continue to be asked to close by 8 p.m., the sources said.

Okinawa will remain under a state of emergency, also until July 11, because its hospitals continue to be strained by COVID-19 patients.

"While it's true that infections are trending down nationwide, it's also true that the pace has slowed," Suga told reporters after meeting with members of his Cabinet including health minister Norihisa Tamura and Yasutoshi Nishimura, minister in charge of coronavirus response.

"We will continue to move forward with vaccinations and take steps to prevent infections from spreading," he said.

Suga said he will consult with experts and make a decision Thursday on whether to lift the state of emergency and in which prefectures. He is expected to hold a press conference after finalizing the move at a task force meeting.

Meanwhile, the government said Wednesday it will allow up to 10,000 spectators at major events in prefectures where it has lifted the state of emergency, although it was not immediately clear how the rule will affect the Tokyo Olympics and Paralympics.

Attendance at events such as sports games and concerts between July and August must not surpass 50 percent of venue capacity, Nishimura said at a COVID-19 subcommittee meeting, adding the cap will be in place for about one month after a state of emergency ends.

Under existing guidelines effective until the end of this month, major events in prefectures not under a state of emergency are allowed a maximum of 5,000 people or 50 percent of venue capacity, whichever number is greater.

The government had worried this would allow too many people to gather, raising the risk of the coronavirus spreading. For example, 34,000 spectators would have been allowed into the 68,000-person capacity National Stadium, the venue for the opening ceremony of the games.

The 10,000-person cap will also apply to areas where a quasi-state of emergency has been lifted.

The government is set to announce this month how many domestic spectators will be able to attend the Tokyo Olympics, having already decided not to allow overseas fans.

Suga has said attendance at the games will be in line with guidelines for other major events, while Nishimura said the decision will be made along with the organizing committee, Tokyo Gov. Yuriko Koike, and the international Olympic and Paralympic committees.

The government's top coronavirus adviser, Shigeru Omi, however, said he had confirmed with officials that the 10,000-person cap has "nothing to do" with the Tokyo Olympics.

Separately, a team of researchers warned Wednesday that another state of emergency may be needed during the Tokyo Olympics to curb a COVID-19 resurgence, even if the highly contagious Delta variant of the virus has a small impact on infections.

The team also said the number of infections could increase by 10,000 cumulatively if the sports event from July 23 is held with spectators, compared with the case without spectators, according to a document shown at a meeting of an expert panel of the health ministry.

The panel expressed concern about "a rebound" in infections in the future even though areas where infections had risen have seen numbers fall, as the speed of the decline has slowed in some places with more people going out.

The study by researchers at the National Institute of Infectious Diseases, Kyoto University and Tohoku University was based on the assumption that people would leave home more often after the current emergency ends next Sunday, causing coronavirus cases to rise again.

If Tokyo saw 1,000 or more new infections per day, then a return to a state of emergency would be warranted, they said.

According to their calculations, even if the Delta variant first detected in India has little impact and only around 10 percent more people are out and about, the number of infections would reach that threshold between late July and early August.

If the Delta variant, which is thought to be 1.8 times more transmissible than the original strain of the coronavirus, has a large impact, a state of emergency could become necessary again in early to mid-July.

A return to restrictions could be avoided under the most optimistic scenario in which the Delta variant has no impact and the increase in people leaving home remains below 15 percent, the researchers said.