The former chief Cabinet secretary comes to the top job at a time when the country is grappling with an economy battered by the novel coronavirus, while longer-term challenges include the country's falling birth rate and simmering tensions with Asian neighbors.

"During such a national crisis, a political vacuum must be avoided at all costs," Suga said at his first press conference as prime minister. "For all the people to restore peace to their lives, I will continue and push forward the Abe administration's policies. I recognize that is a mission given to me." 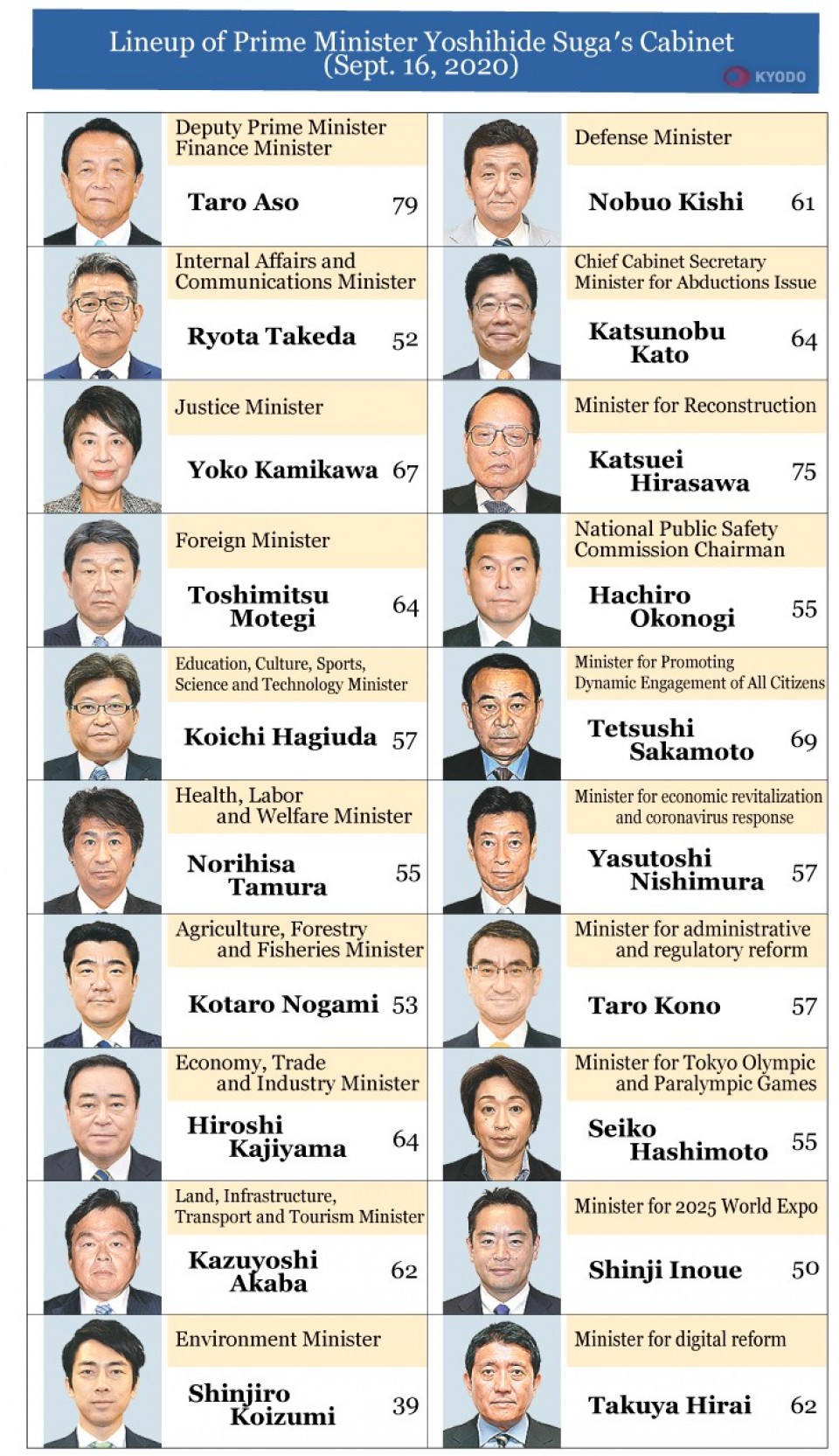 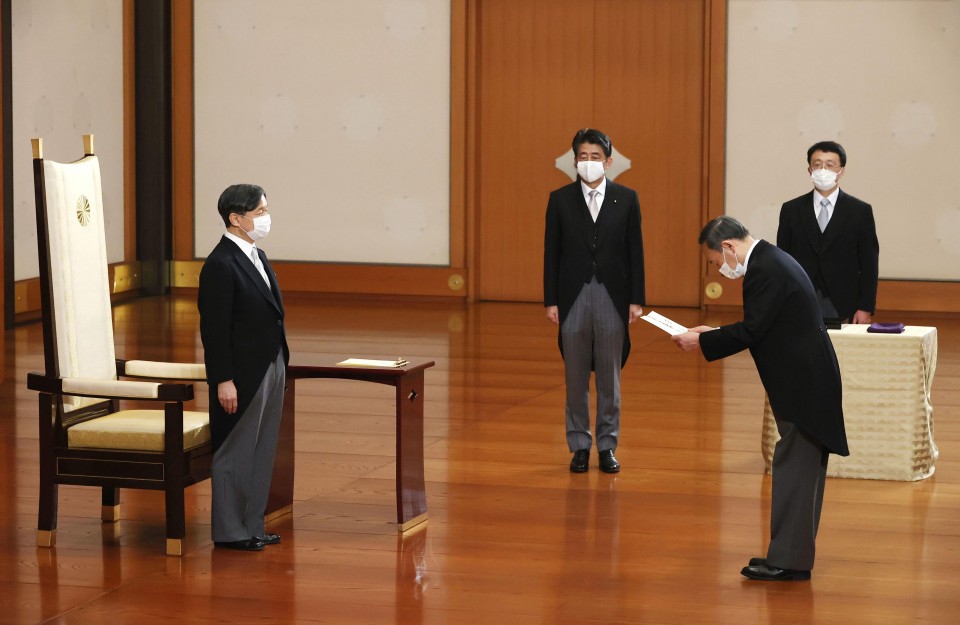 Japan's new Prime Minister Yoshihide Suga (R) is formally inaugurated in a ceremony with Emperor Naruhito (L) at the Imperial Palace in Tokyo on Sept. 16, 2020. In the center is Suga's predecessor Shinzo Abe. (Kyodo)

Suga, elected by parliament after becoming head of the ruling Liberal Democratic Party two days ago, vowed to balance preventing a rise in infections with resuming economic and social activity, saying it was crucial to keep businesses going and protect jobs.

The 71-year-old said the COVID-19 outbreak had demonstrated the need for the government to use digital technology more efficiently, and that a new agency would be created to take the lead on the task.

The son of a farmer who unlike Abe and many other lawmakers in Japan is not the scion of a political dynasty, Suga promised to push ahead with administrative reforms "to shatter bureaucratic sectionalism, vested interests and bad precedents" that are hindering the government.

Former defense chief Taro Kono, viewed as a future contender for premier, was tapped as minister responsible for spearheading the reforms.

Suga said he is committed to advancing Abe's policies including "Abenomics," a mix of monetary easing, fiscal stimulus and structural reform aimed at beating deflation and putting the world's third-largest economy on a growth track. 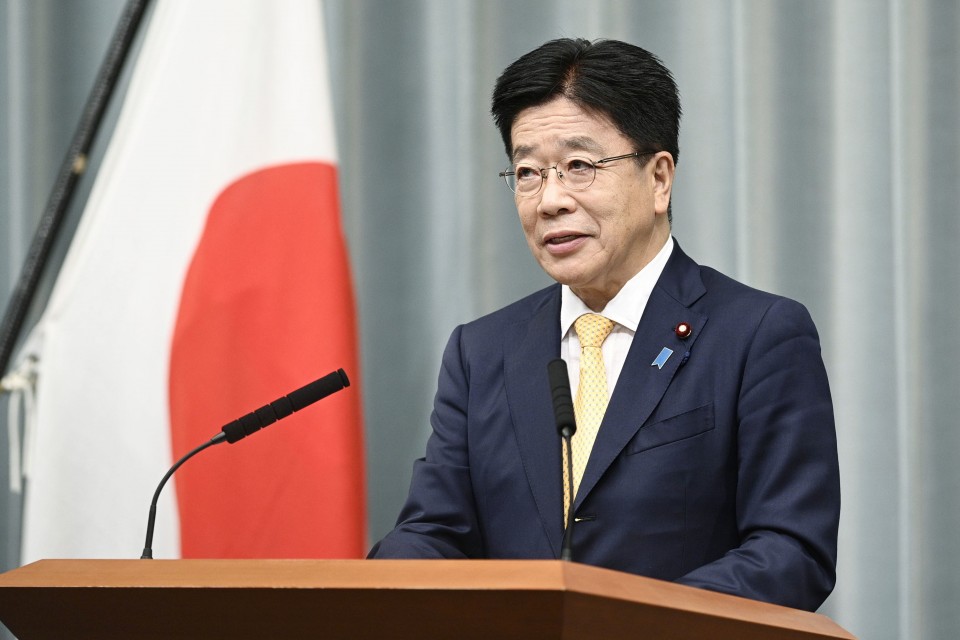 Health minister Katsunobu Kato was chosen to succeed Suga as chief Cabinet secretary, a key post that serves as both a policy coordinator and the government's top spokesman.

Seven were either shifted to other portfolios or returned to ministerial positions they had held in the past, while five were given their first Cabinet posts, including Defense Minister Nobuo Kishi, Abe's younger brother.

The average age of the Cabinet is 60.4, with Environment Minister Shinjiro Koizumi the only one younger than 50. There are only two women, Olympics and Paralympics minister Seiko Hashimoto and Justice Minister Yoko Kamikawa.

The appointments were spread across the LDP's seven major factions, including the two led by Suga's rivals in the party's presidential election on Monday, former LDP policy chief Fumio Kishida and former Defense Minister Shigeru Ishiba. 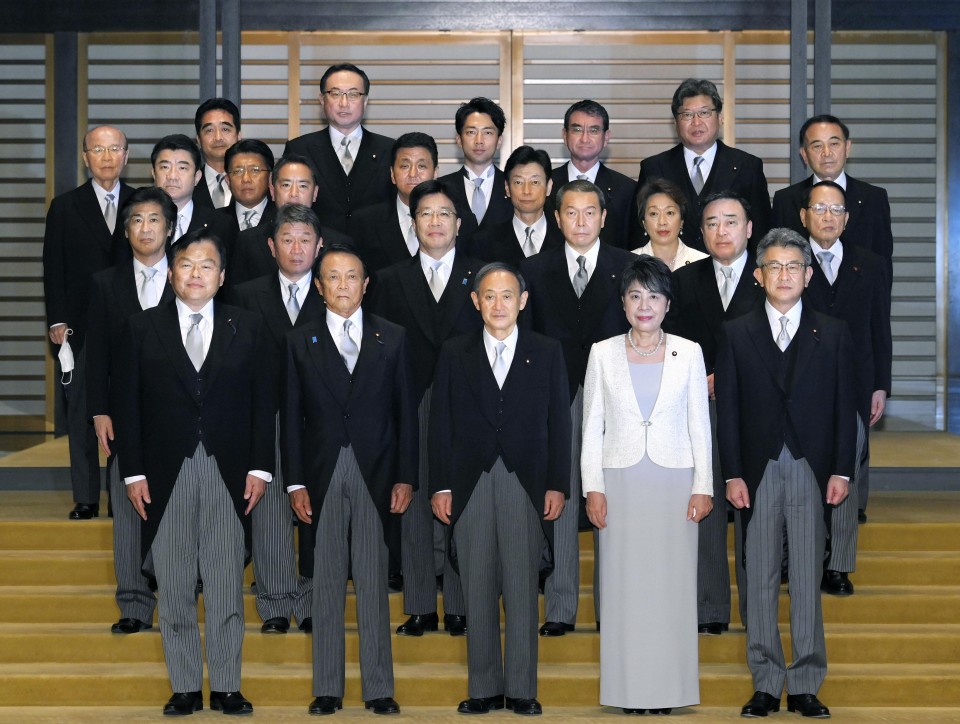 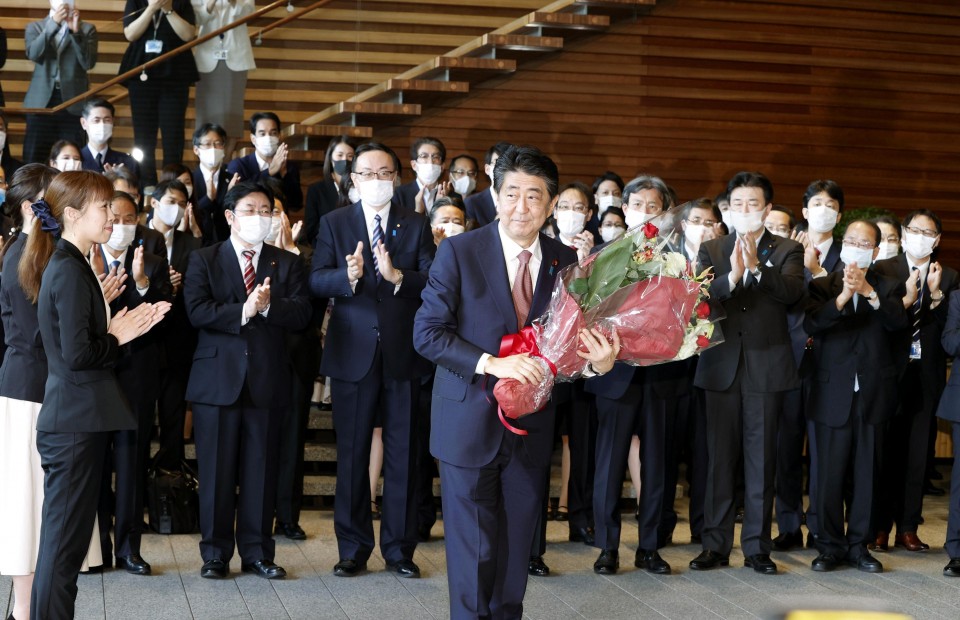 Abe's Cabinet resigned en masse Wednesday morning, drawing an end to the premier's record-long tenure of seven years and eight months. He announced in late August he would step down to receive treatment for a chronic bowel disease that had left him fatigued and unsure of his ability to lead the country.

"I have spent every day putting my all into economic recovery and diplomacy to protect Japan's interests," Abe told reporters at the prime minister's office. "It is my honor to have been able to work on a range of issues along with the people during this time. I want to thank everyone from the bottom of my heart."

The Diet convened an extraordinary session in the afternoon to elect his successor, with Suga's victory a foregone conclusion as the ruling coalition of the LDP and junior partner Komeito has a majority in both chambers. He received 314 votes in the 465-member House of Representatives and 142 votes in the 245-member House of Councillors.

After announcing the members of his Cabinet, Suga was formally inaugurated in a ceremony at the Imperial Palace. His tenure will last through the remainder of Abe's term as LDP leader until September 2021.

At 71 years and 9 months, Suga is the oldest prime minister to take office since Kiichi Miyazawa in 1991, a fact belied by his notorious work ethic. Suga says he keeps fit by taking 40-minute walks and doing 100 sit-ups every morning.

Aside from tackling the short-term economic damage that the coronavirus has caused by forcing people to stay home and wiping out tourism from overseas virtually overnight, Suga will be tasked with stemming the country's falling birth rate and improving its dismal fiscal health.

The consumption tax will eventually need to be raised from the current 10 percent to cover swelling social security costs, Suga said last week, though he later walked back those comments by saying a hike would not be necessary within the next decade.

In the press conference on Wednesday, Suga reaffirmed his promise to make fertility treatment eligible to be covered by national health insurance and to take steps to revive regional economies that have shriveled along with the graying population.

Japan's security alliance with the United States will remain the foundation of its foreign policy, he said, while also seeking to maintain "stable relations" with neighboring countries including China and Russia, both of which have territorial disputes with Tokyo.

The new leader also renewed his determination to continue working toward securing the return of Japanese nationals who were abducted by North Korea in the 1970s and 1980s.

Asked by a reporter whether he plans to call an election soon to gain a strong public mandate, Suga said there is not much time until the end of the lower house members' current term in October 2021, and that would be a factor in any decision he makes on the matter.