Yoshihide Suga, who was elected Japan's prime minister by parliament on Wednesday, has kept a low profile for much of his career, and until recently was not considered a contender for the top job. 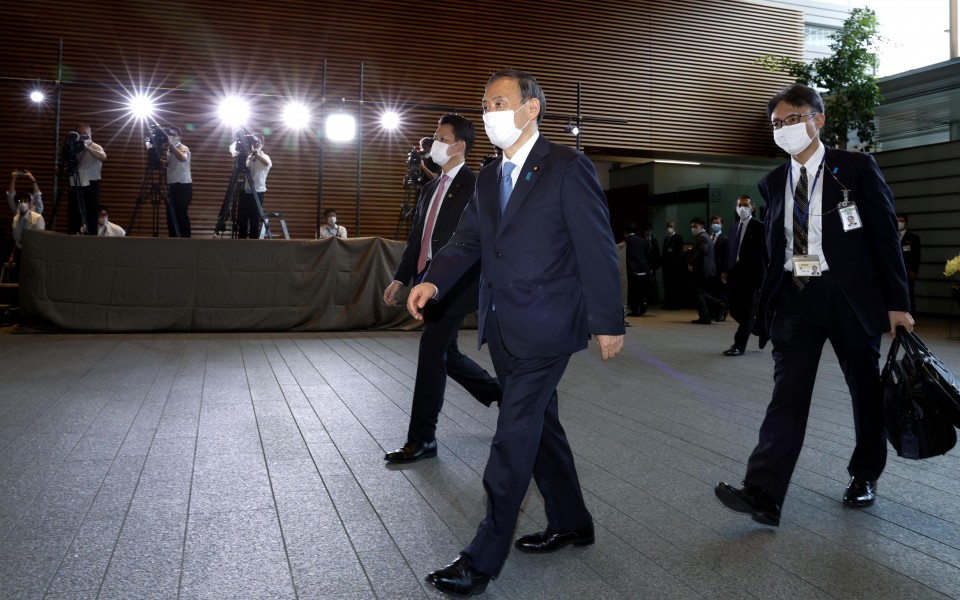 Born on Dec. 6, 1948, in a snow-covered village in Akita Prefecture to strawberry farmer Wasaburo and schoolteacher Tatsu, Suga helped out in the fields as a child and, as the eldest son, was expected to eventually take on the family business.

Wasaburo, who worked for South Manchuria Railway Co. during World War II, developed a late-harvest variety of strawberry on his return to Japan following the country's surrender. It proved a hit, selling for a premium to city dwellers.

Suga was reluctant to become a farmer himself and has said that after high school he "basically ran away from home" to find work in Tokyo. He ended up at a cardboard factory but quickly became disillusioned and quit, enrolling at Hosei University in 1969.

Suga has said he had no interest in the wave of student protests against the Japan-U.S. security alliance and the Vietnam War sweeping the country at the time, busying himself with a number of jobs such working as a security guard and low-level newsroom assistant to pay his way through school. He did make time for sports, becoming vice-captain of the karate team. 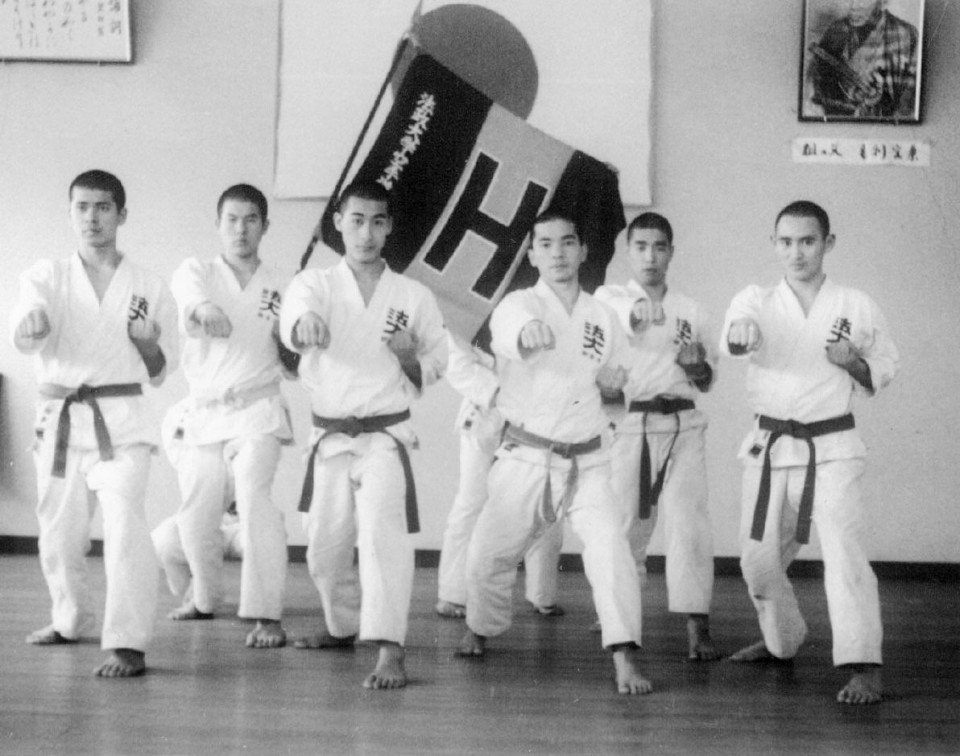 File photo shows Yoshihide Suga (far R) when he was a member of a Karate club in Hosei University. (Photo courtesy of Suga's office)(Kyodo)

A few years after graduating and joining an electrical maintenance company, Suga grew interested in politics and became a Diet member's secretary, learning the ins and outs of the trade for more than a decade before successfully running for the Yokohama city assembly in 1987. 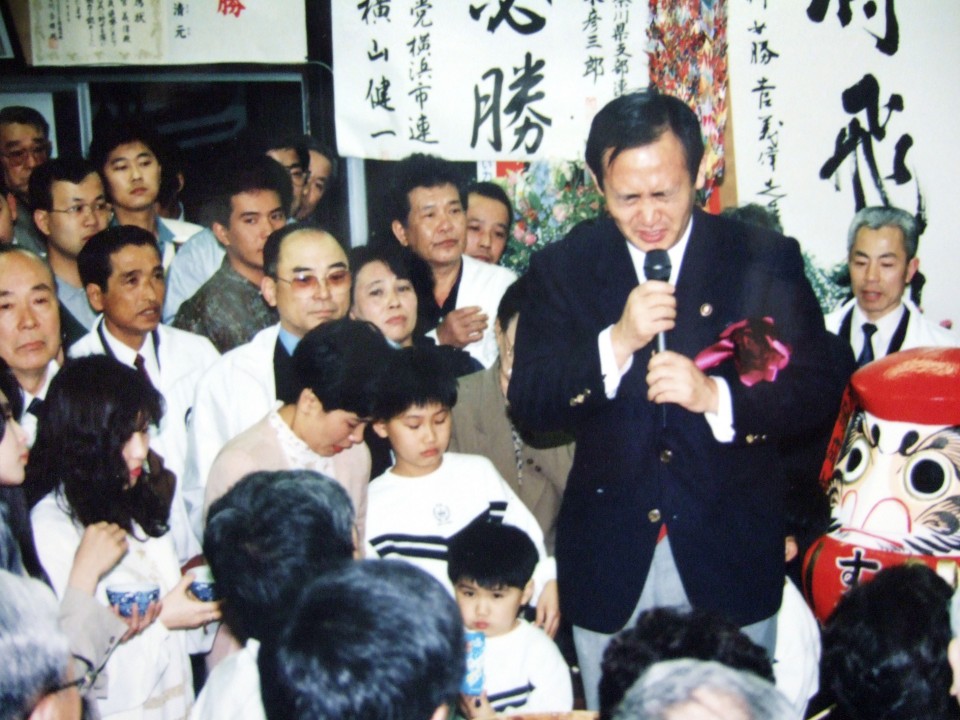 Undated supplied photo shows Yoshihide Suga after winning a seat in the Yokohama city assembly for the first time in 1987. (Photo courtesy of Suga's office)(Kyodo)

His chance to enter national politics came in 1996 when the son of an aging member of the House of Representatives who was to take over his father's constituency unexpectedly passed away, leaving open a spot to run on the Liberal Democratic Party ticket. He won the seat at the age of 47.

Suga has cultivated an image as a self-made man -- his motto is "Where there's a will, there's a way." His background is in sharp contrast to the man he succeeds as prime minister. Shinzo Abe, the scion of a political dynasty, was groomed for office from a young age. 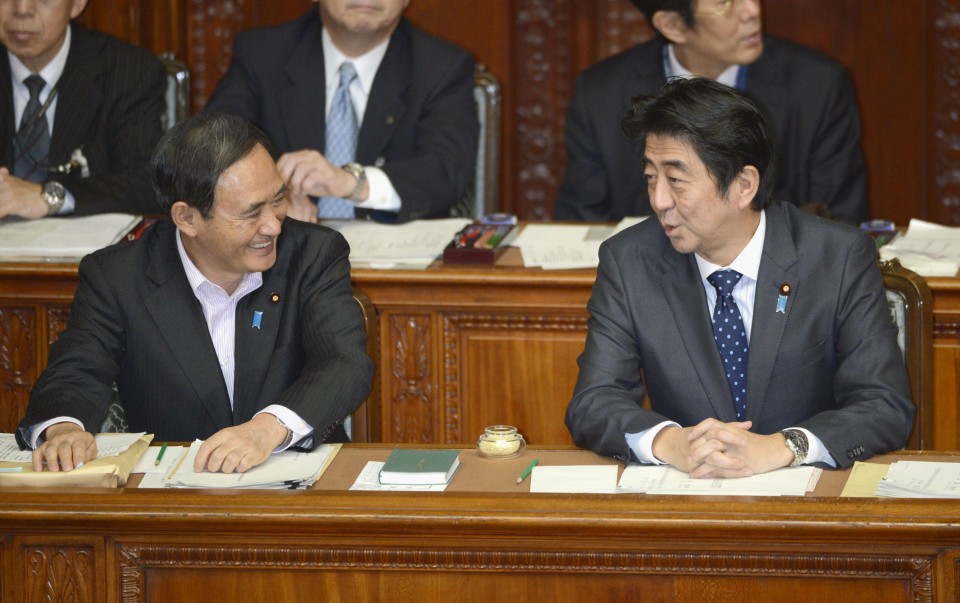 The two became close over their shared passion for securing the return of Japanese nationals abducted by North Korea in the 1970s and 1980s. Suga received his first Cabinet position during Abe's first stint in power from 2006 to 2007.

As minister of internal affairs, Suga introduced a hometown tax program that gives tax deductions for donations made to local governments in the countryside. He played a key role in Abe's return to power in late 2012.

A notorious workaholic, Suga's morning routine during his nearly eight years as chief Cabinet secretary has been described as follows. He wakes up at 5 a.m., spends an hour checking the news including all the major papers and NHK, goes for a 40-minute walk and does 100 sit-ups, eats breakfast and then goes to work at the prime minister's office at 9 a.m.

During the day, Suga has held press conferences twice daily as the government's top spokesman and two dozen or so meetings. He prefers to have soba noodles for lunch so he can finish eating in five minutes. 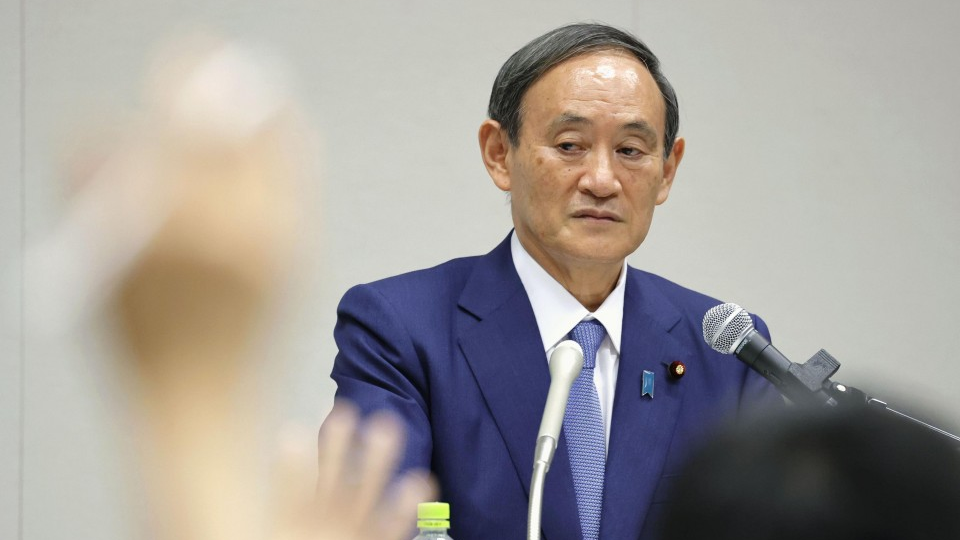 After leaving the prime minister's office at 6:45 p.m., he meets over dinner with other politicians as well as academics to exchange views on policy. He often holds two or three of these meetings per night, while taking care not to eat too much.

A teetotaler, Suga has a sweet tooth that he satisfies by taking his aides and reporters out for pancakes every few months.

He rarely, if ever, sleeps at his home in Yokohama, instead staying at a government dormitory nearby to be able to swiftly respond to any emergencies.

Suga was relatively unknown to the public until April last year, when his unveiling of Japan's new imperial era name earned him the nickname "Uncle Reiwa" along with a popularity boost. 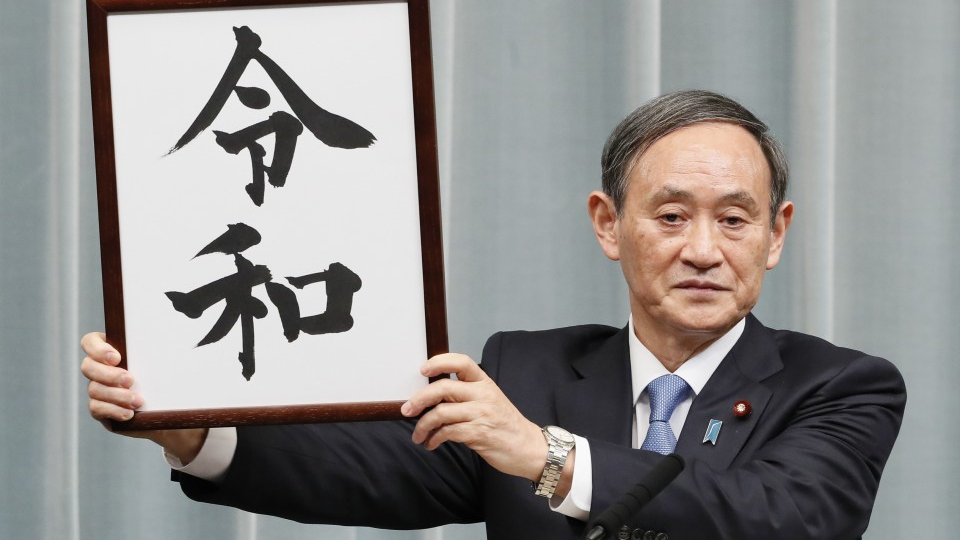 His aversion to the spotlight extends to his wife Mariko, with whom he has three adult sons. The woman who will become Japan's first lady rarely appears in public, and Suga has said he had the hardest time convincing her to let him run for LDP leader.

Known for being highly demanding of bureaucrats who work under him, Suga has wielded the authority of the powerful Cabinet Bureau of Personnel Affairs to sideline those who perform poorly or are not aligned with his thinking.

Asked to give an example of a common misconception about him in a livestreamed debate with the two other LDP leadership candidates, Suga said, "People think I'm scary but I'm very nice to those who do their job properly."

Unlike his rivals in the LDP leadership race, former Foreign Minister Fumio Kishida and former Defense Minister Shigeru Ishiba, Suga has little experience in diplomatic and security affairs, preferring to focus on domestic issues such as lowering mobile phone fees and the "Go To Travel" domestic tourism program, meant to underpin an industry hit hard by the coronavirus pandemic.

Etsushi Tanifuji, a political science professor at Waseda University, said that Suga does not have a grand vision for Japan and is more of a problem-solver, which worked for him as chief Cabinet secretary but could be problematic as prime minister.

"Some leaders have an ideology and they act with that as their guiding light. Suga is not that kind of politician." 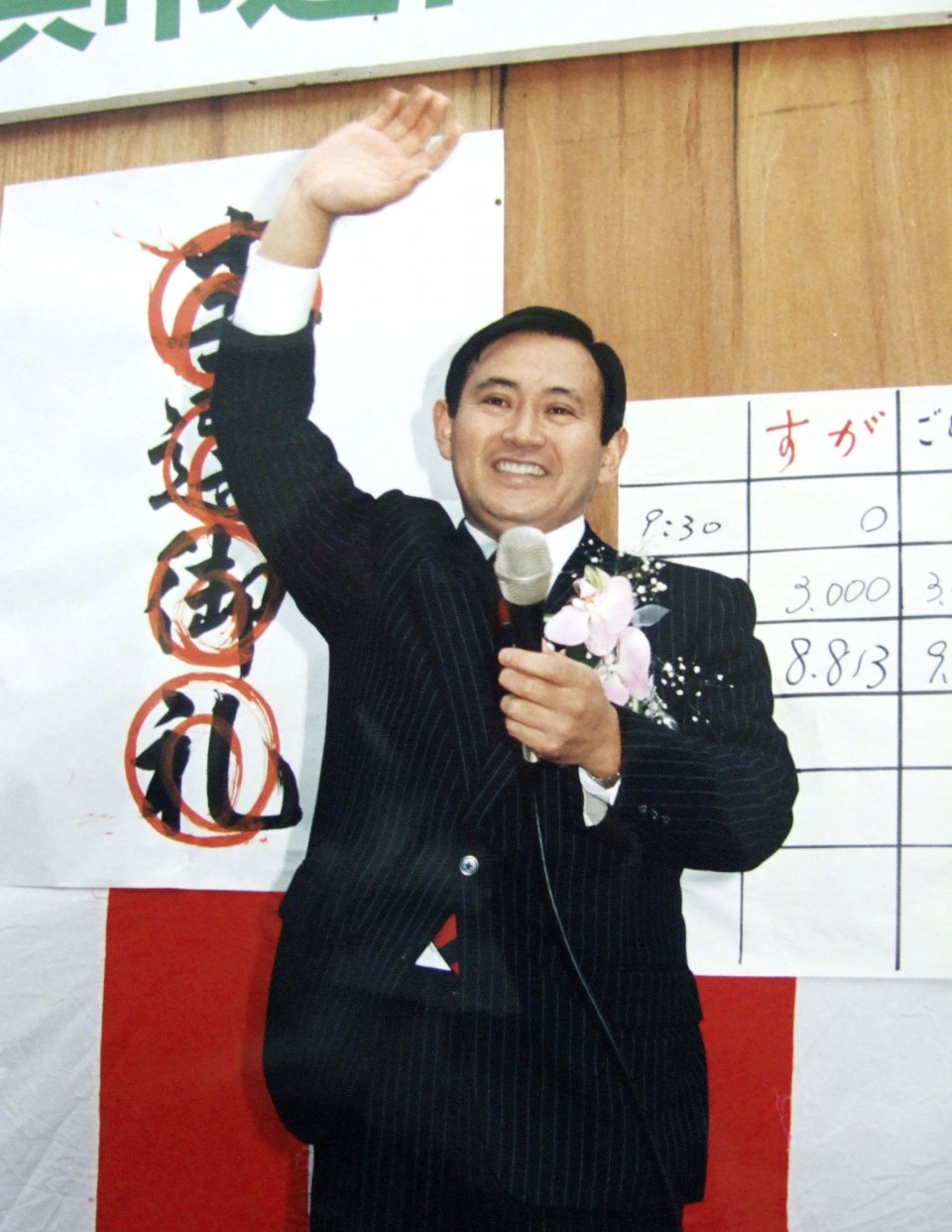 File photo shows Yoshihide Suga after being elected for the first time for the Yokohama city assembly. (Photo courtesy of Suga's office)(Kyodo) 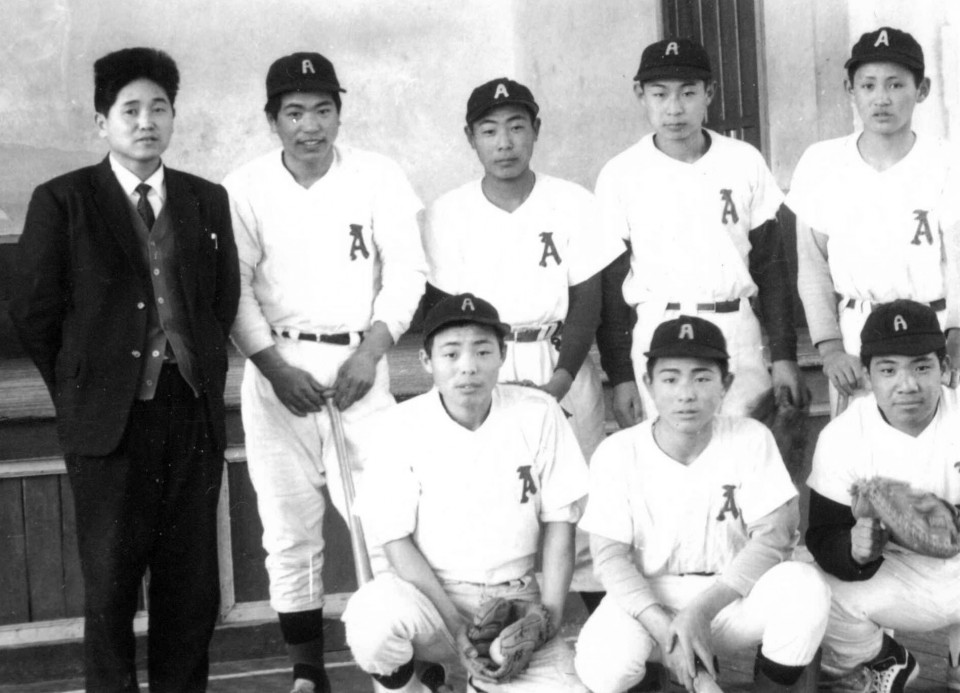 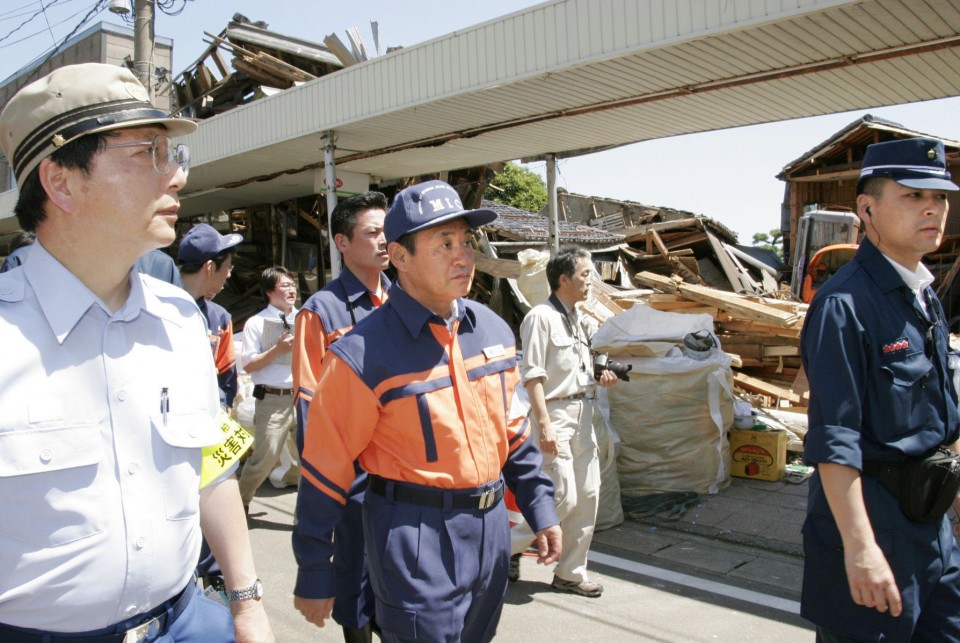 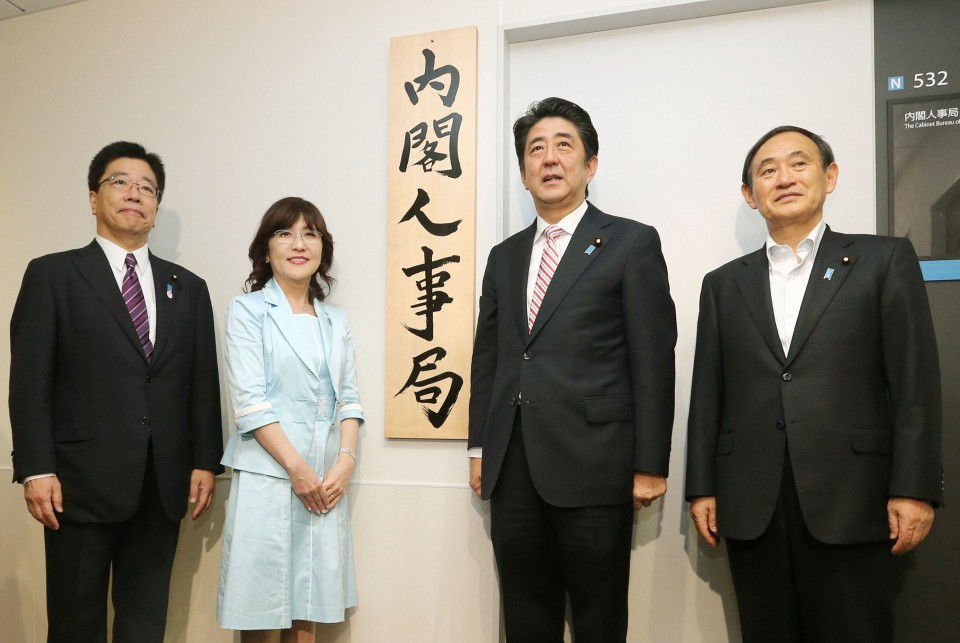 File photo taken in May 2014 shows Japanese Chief Cabinet Secretary Yoshihide Suga (R) posing for a photo with Prime Minister Shinzo Abe (2nd from R) and other government officials during a ceremony to mark the formation of the Cabinet Bureau of Personnel Affairs at the Cabinet Office. (Kyodo) 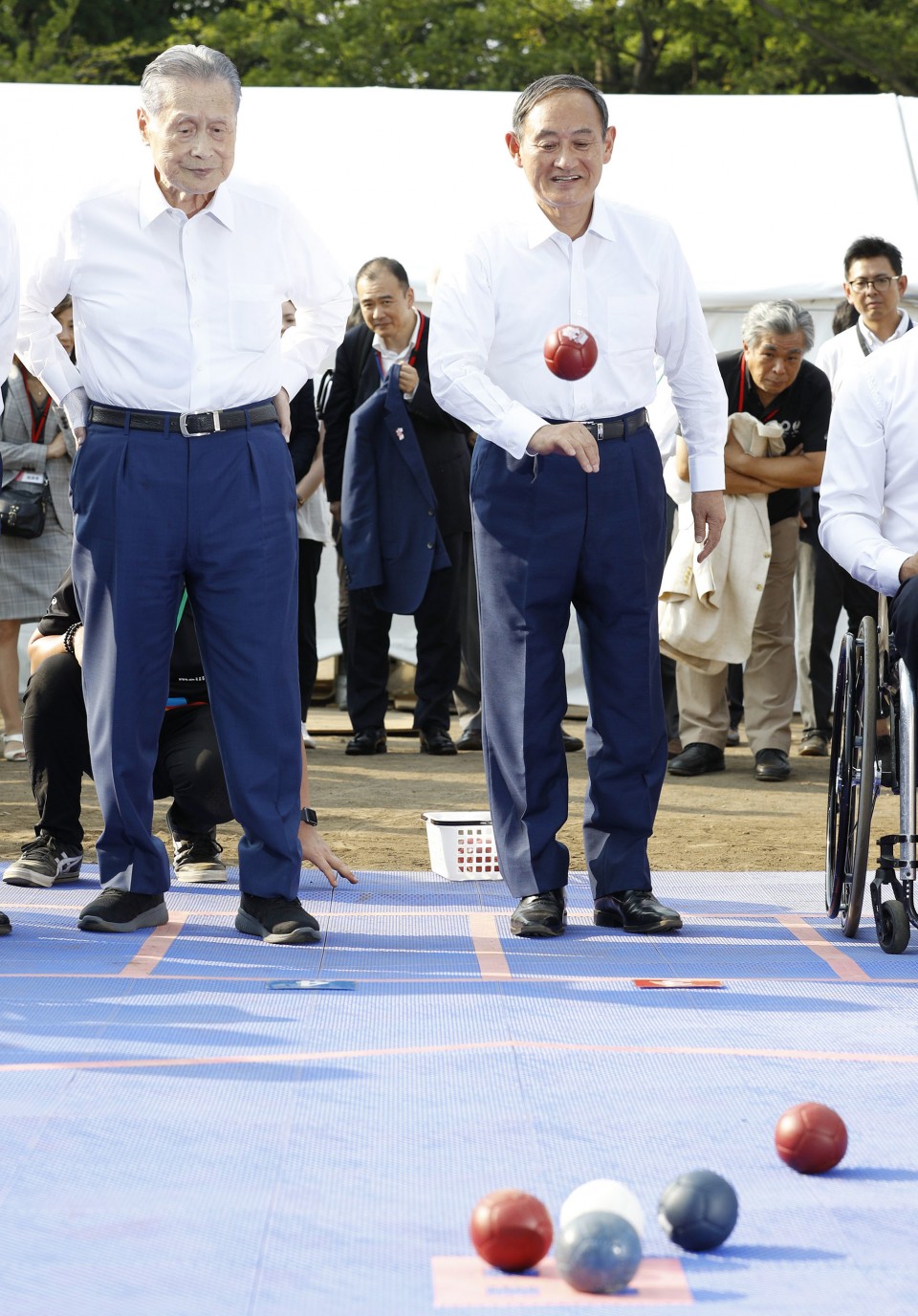 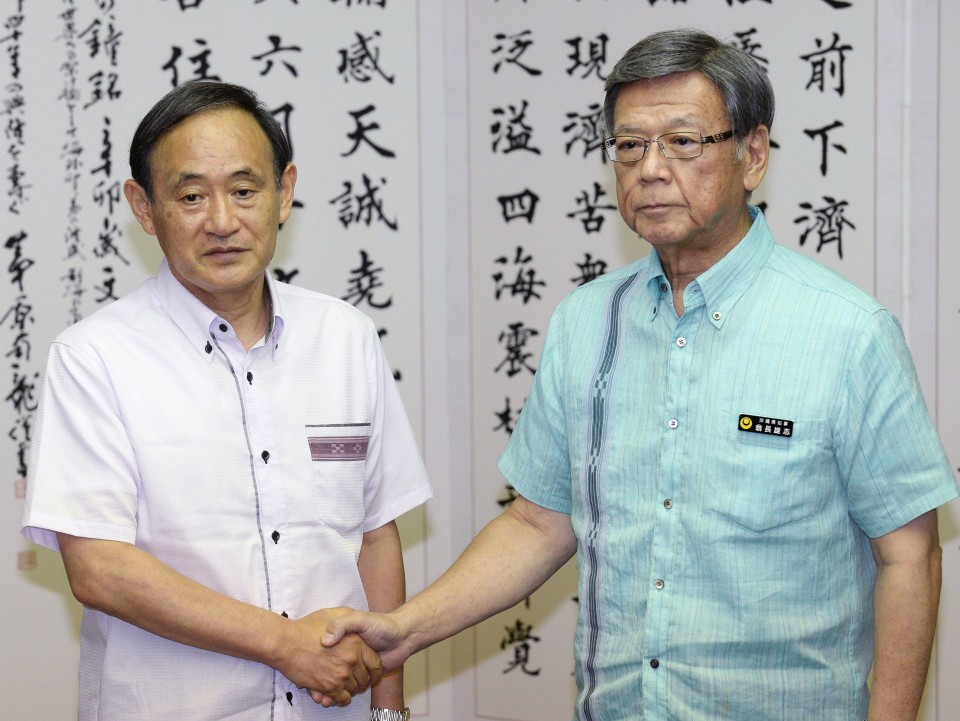 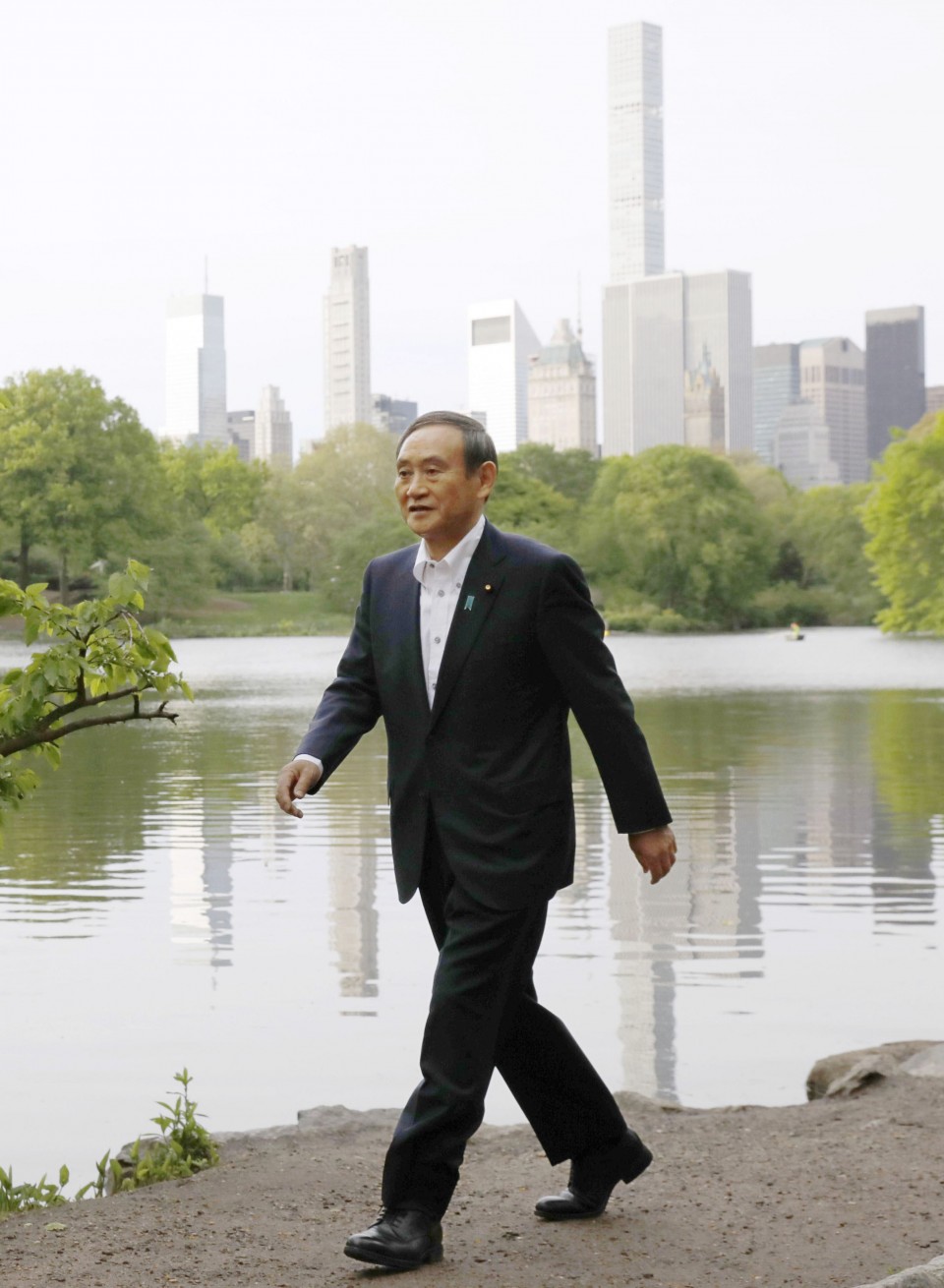 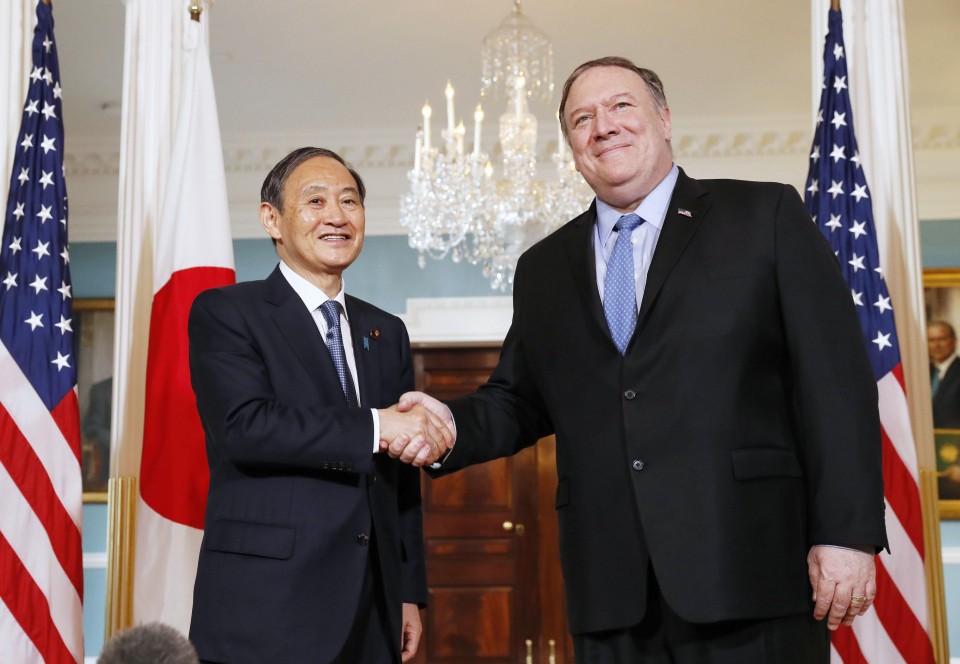 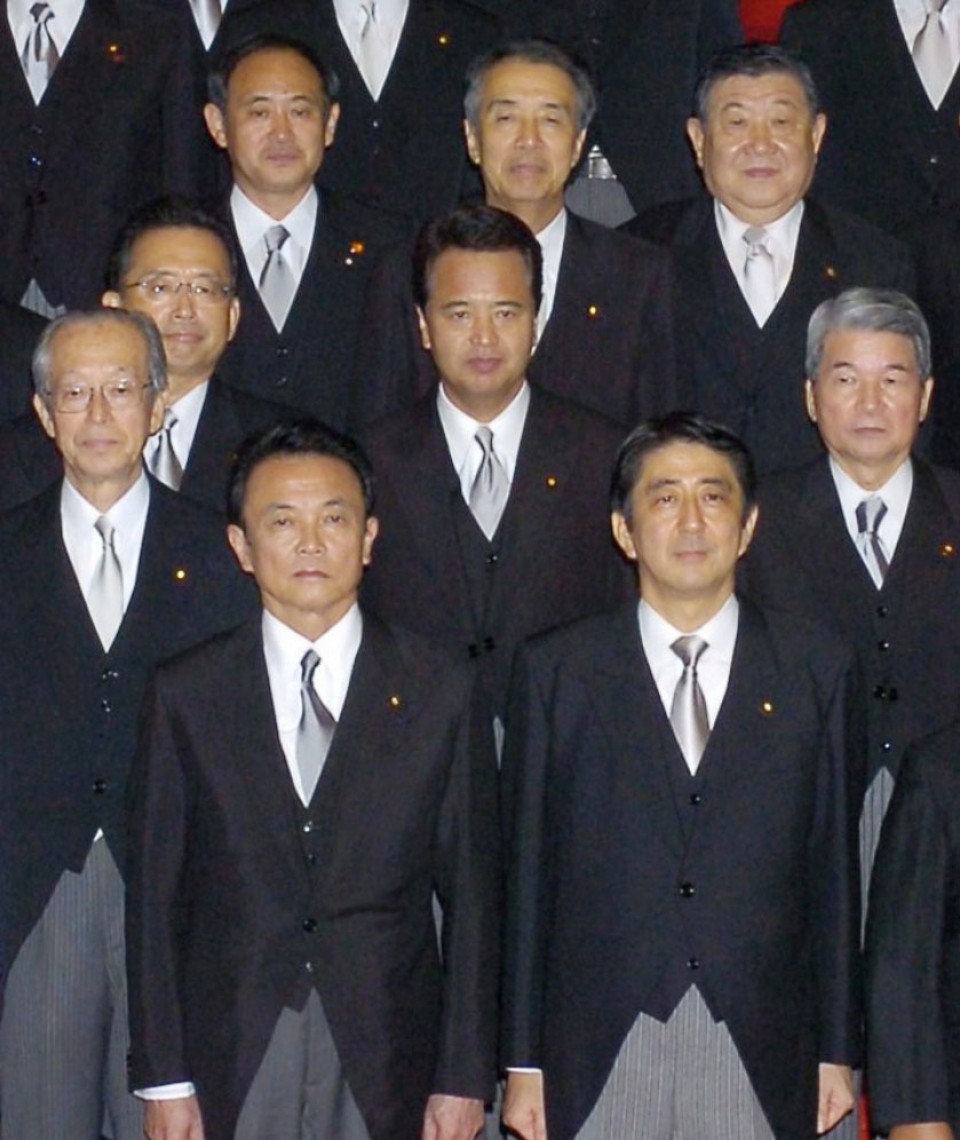 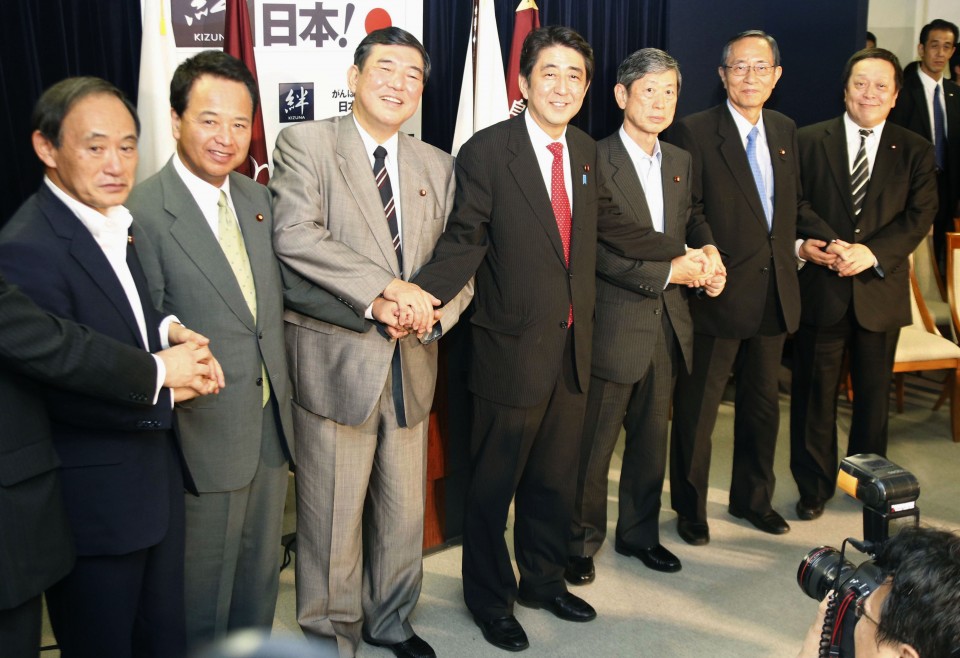