A U.S. Marine base in Okinawa, southern Japan, has confirmed 32 more novel coronavirus cases, the Okinawa prefectural government said Monday, pushing the total number of infections at facilities on the islands to 98.

The Okinawa government said it was informed by the U.S. forces of the latest figure at U.S. Marine Corps Air Station Futenma, following earlier reports of localized clusters within the military.

Meanwhile, U.S. Marine Corps Air Station Iwakuni said several people working at the base in the southwestern prefecture of Yamaguchi have been infected with the virus. It is the first time that infections linked to the air station have been confirmed, according to the Yamaguchi prefectural government. 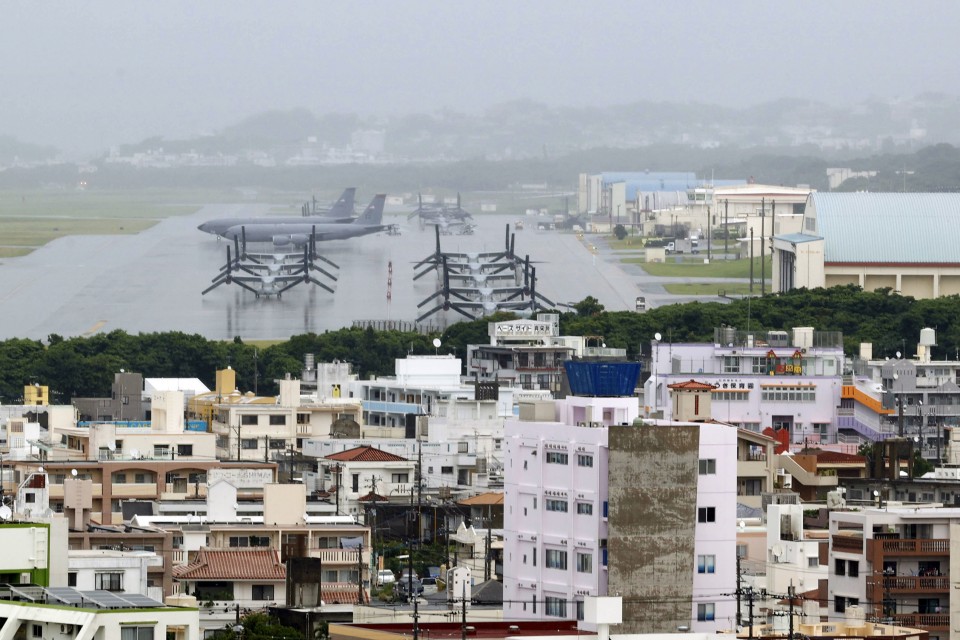 Photo shows U.S. Marine Corps Air Station Futenma in Ginowan in Japan's southern island prefecture of Okinawa on June 22, 2020, a day before the 60th anniversary of the enforcement of the revised Japan-U.S. security treaty. (Kyodo)

The Okinawa prefectural government said Saturday that Futenma and Camp Hansen, another U.S. Marine base, had been put on lockdown by the military, with 61 coronavirus cases confirmed that week.

"We will share information and respond accordingly," Chief Cabinet Secretary Yoshihide Suga said during a press conference. "The cases were confirmed after stringent testing among all members of the infected individuals' units."

The Okinawa government is requesting further information on their movements and is making plans to hold a joint meeting with the U.S. forces regarding the medical system.

Of the total number of cases, 71 are linked to Futenma and 22 to Camp Hansen. Another three were confirmed at Kadena Air Base, and one each at Camp McTureous and Camp Kinser.

Gov. Denny Tamaki said on the weekend that some American military personnel held parties in downtown areas and beaches around July 4 to celebrate Independence Day.

Tamaki had expressed his shock over the U.S. forces' report on the new infections, saying, "We have strong doubts about the measures (taken by the U.S. military) to prevent the spread of the virus."

On Monday, the prefectural government said it received reports that U.S. service personnel had tested positive. It was not immediately known how many individuals the reports were referring to.

The prefecture on Sunday conducted polymerase chain reaction tests on 130 people including employees who were in contact with U.S. service personnel.

As for the infections involving the Iwakuni base, the U.S. military was informed by the Japanese Foreign Ministry of the cases.

Those infected arrived in Iwakuni on Monday after taking virus tests upon their arrival at Haneda airport in Tokyo, the base said, without disclosing their nationalities.

The Yamaguchi prefectural government said local health authorities and the base will work together to carry out an epidemiological investigation of the cases.