A woman running a sex worker-dispatching business sued the state on Wednesday, saying its blanket exclusion of the sex industry from a cash handout program to support small companies hit by the coronavirus is discrimination banned under the Constitution.

In the lawsuit filed with the Tokyo District Court, the woman, who operates the business in western Japan's Kansai area, demanded the payment of the benefits as well as consolation money for having been discriminated against "without reasonable grounds," her lawyers said. 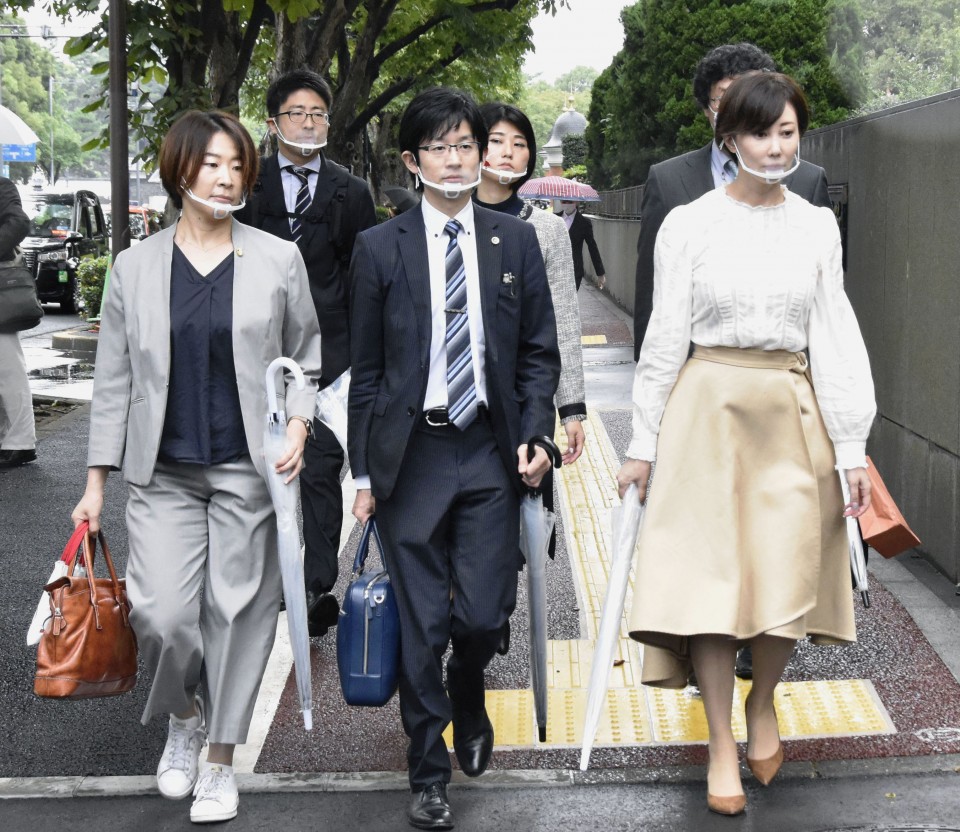 A group of lawyers representing a a sex business operator walk to the Tokyo District Court on Sept. 23, 2020, to sue the state over its blanket exclusion of the sex industry from a cash handout program amid the coronavirus pandemic. (Kyodo)

The defendants also include Recruit Co. and Deloitte Tohmatsu Financial Advisory LLC, according to the lawyers. The two firms are in charge of clerical work for the relief program.

As part of financial assistance to smaller businesses suffering from plunging revenues due to the virus spread, the government provides a maximum 2 million yen ($19,000) in one-off lump sum. It also offers benefits to help them pay rent.

However, businesses in the sex industry, such as companies dispatching sex workers and operators of "love hotels," or accommodations for sexual activities, are not covered by the scheme.

The lawyers said the woman suspended her business between mid-April and late May in accordance with business closure requests from the local authorities to contain the virus spread.

As a result, her business saw its revenue dive 80 percent in April and 70 percent in May from year-before levels.

When she and other sex business operators met with an official at the Small and Medium Enterprise Agency in June to ask for their companies to be included in the handout program, the official rejected their request, saying such businesses "have previously been excluded from public support, such as ones following natural disasters," and that the agency merely "followed the past responses" made by the state.

But supporters of the plaintiff say the government feared possible public backlash in case it provides taxpayers' money to sex business operators, a stance they say will only deepen discrimination against the industry and its workers.

According to the lawyers, the plaintiff files income tax returns and operates her business in compliance with laws regulating the sex industry.

The woman told Kyodo News in August she had decided to go to court over the issue because it "concerns the lives of people who work" in her business. "The state has yet to provide any convincing explanation" for the exclusion," she also said at the time.

Yusuke Taira, the chief of the team of lawyers defending her, has said it is "irrational" for the state to not provide benefits to sex industry businesses across the board, including those abiding by the law, calling the state "capitalizing on public discrimination" against the industry.

According to the National Police Agency, there were 31,956 sex industry businesses registered with the authorities nationwide as of the end of 2019, up marginally, or 0.1 percent, from the previous year.

More than 60 percent of them were sex worker-dispatching businesses, at 20,319.

Article 14 of the Constitution provides for equality for all, prohibiting discrimination "in political, economic or social relations because of race, creed, sex, social status or family origin."

Concern raised over exclusion of sex workers from virus compensation