Tokyo confirmed on Monday 119 new coronavirus cases, falling below 200 for the first time in five days, but the central government warned the capital still needs to be on alert as it plans a new initiative to spur domestic tourism.

Gov. Yuriko Koike dismissed the view of Chief Cabinet Secretary Yoshihide Suga the same day that Tokyo is to blame for the increase in infections, saying they largely reflect the greater number of tests.

The latest figure comes a day after Tokyo confirmed 206 coronavirus cases, breaching 200 for a record fourth straight day, including the largest single-day tally of 243 on Friday, amid increasing concerns among the public about a resurgence of the pandemic. 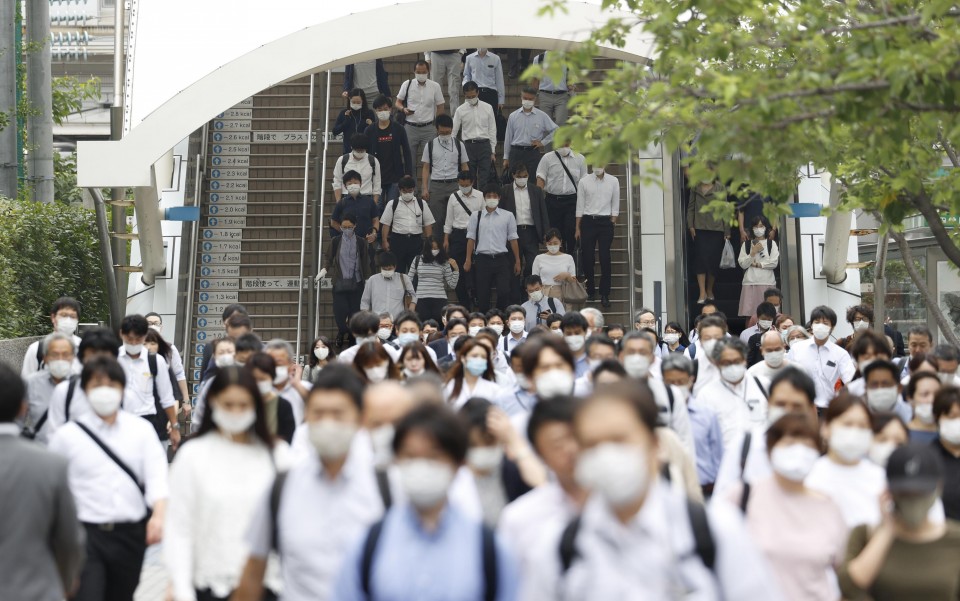 People wearing face masks commute to work in Tokyo on July 13, 2020, amid the spread of the novel coronavirus. (Kyodo)

Tokyo's infection cases have now reached 8,046, accounting for about a third of the total number in Japan. The nationwide tally stood at 22,198 on Monday, up 261 from the previous day. This figure excludes 712 from the Diamond Princess, the cruise ship that was quarantined in Yokohama in February.

"We should not waver between relief and disappointment depending on the result every day and should be ready to respond urgently," said economic revitalization minister Yasutoshi Nishimura, who is also in charge of the coronavirus response.

Koike said the metropolitan government would look into cluster infections at a theater in the capital after at least 37 people were reported as testing positive for the virus.

Sixteen actors, five staff and 16 audience members were infected at Theater Moliere in Shinjuku Ward between June 30 and July 5, according to event organizer Rise Communication Co.

A health center said all the audience of around 800 who attended the production and 50 actors and staff members are considered as potential close contacts, according to the organizer.

"It will affect how we proceed" with virus measures, especially after the central government relaxed its guidelines Friday for holding large sporting and other events, Koike told reporters.

The government relaxed its guidance for spectators at concerts and other events to a maximum of 5,000 from the previous 1,000, while capacity at indoor venues must be kept at 50 percent or below the usual level.

Suga said on Saturday in a speech in Hokkaido that the Tokyo government is responsible for the increasing number of new cases in the city.

But Koike dismissed his view, saying that the recent trend resulted from efforts to increase virus tests in the capital, which are greater than those in other prefectures.

Tokyo has recently been conducting more than 3,000 virus tests a day, far more than about 1,000 in April, while only 100 to 200 are being carried out in some other prefectures such as Kanagawa and Saitama.

"It is a problem that the country should address," she told reporters.

Koike was also critical of the central government's subsidy campaign aimed at boosting domestic tourism starting on July 22 amid the growing number of new cases.

"It is like putting cooling and heating systems on at the same time. I'm not sure how we are supposed to deal with that," she said.

As the number of new cases in Tokyo remains relatively high, some other prefectures are warning residents to avoid nonessential trips to the city.

In Aichi Prefecture, six new cases have been reported since the start of July. The prefecture found all of the infected had traveled to or from Tokyo and its neighboring areas or had contact with someone infected in these areas, Gov. Hideaki Omura said.

"I'd like the people in the prefecture to act appropriately," he said, asking residents to hold off making any nonessential trips to Tokyo.

Koike has also asked people in Tokyo to refrain from traveling to other prefectures.

Suga reiterated at a press conference Monday that the central government is looking to strike a balance between implementing measures to prevent a further spread of the virus and promoting increased economic activity.