The coalition of the Liberal Democratic Party and Komeito, along with like-minded opposition and independent lawmakers, garnered 81 seats in total. Combined with seats uncontested this time, they secured 160, falling short of the 164 needed in the chamber to propose amending the pacifist Constitution.

Abe has set his sights on revising the Constitution in 2020 but the pro-amendment camp's failure to hold on to their two-thirds majority means the LDP leader faces the daunting task of winning support from opposition parties if he wants to achieve his goal.

Still, the ruling parties secured 71 of the 124 seats up for grabs in the 245-member House of Councillors -- 57 by the LDP and 14 by Komeito -- crossing the line of a majority of contested seats set by senior party executives for determining victory.

Speaking during a TV program, Abe said the results showed voters had chosen political stability, as he had called for during the election campaign.

"We've secured a mandate to steadily carry out our policies," said Abe, who heads the LDP.

On the failure to retain the two-thirds majority, Abe only expressed his hope that parliamentary debate will deepen to build a consensus on constitutional change with the opposition camp.

"I hope that opposition parties will fulfill their responsibility" to engage in such debate, he said.

The supreme law has never been amended since it took effect in 1947.

Recent media surveys showed many voters did not regard it as a top priority issue during the campaign, as they focused more on pension and tax issues as well as economic policies.

The ruling and opposition parties -- as well as the public -- remain divided over revising the war-renouncing Article 9, a symbol of Japan's postwar pacifism. Even within the ruling coalition, many lawmakers from Komeito are cautious about the idea.

When asked about expectations within the LDP that Abe will seek another term as party leader after his current term ends in 2021, he said he is not considering such an option "at all."

With 79 uncontested seats, the pro-amendment camp needed to win at least 85 seats in Sunday's election to maintain its two-thirds majority in the upper house.

The ruling bloc needs two-thirds majorities in both houses of the Diet to propose a constitutional amendment and call a national referendum on the issue. It already has such a majority in the powerful House of Representatives. 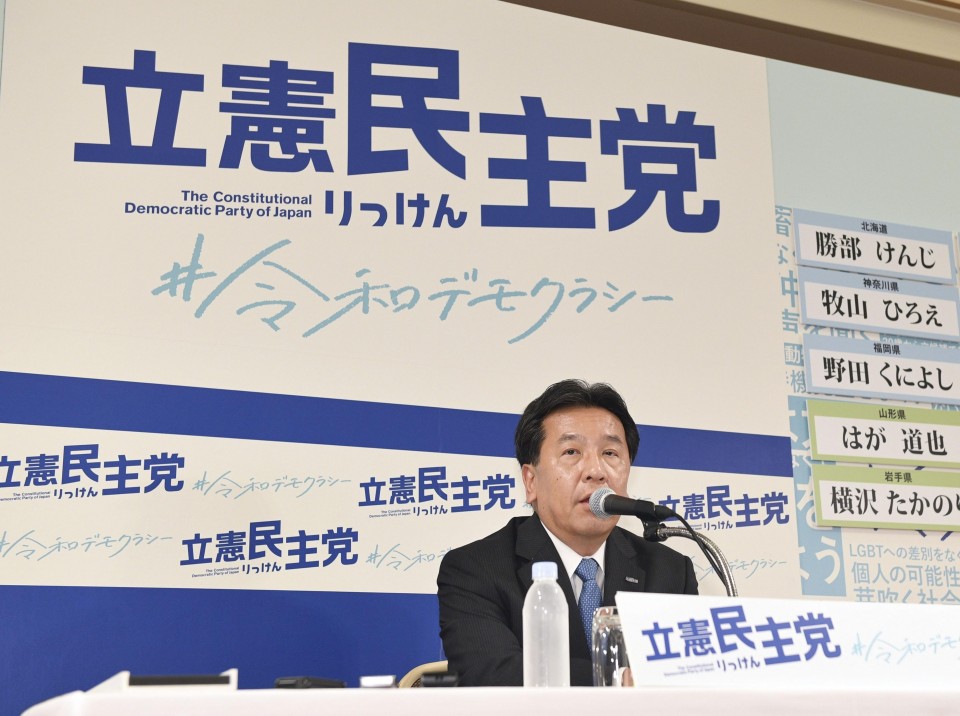 (Yukio Edano, leader of the Constitutional Democratic Party of Japan, meets the press at the party's election operations center in Tokyo following the House of Councillors election on July 21, 2019.) 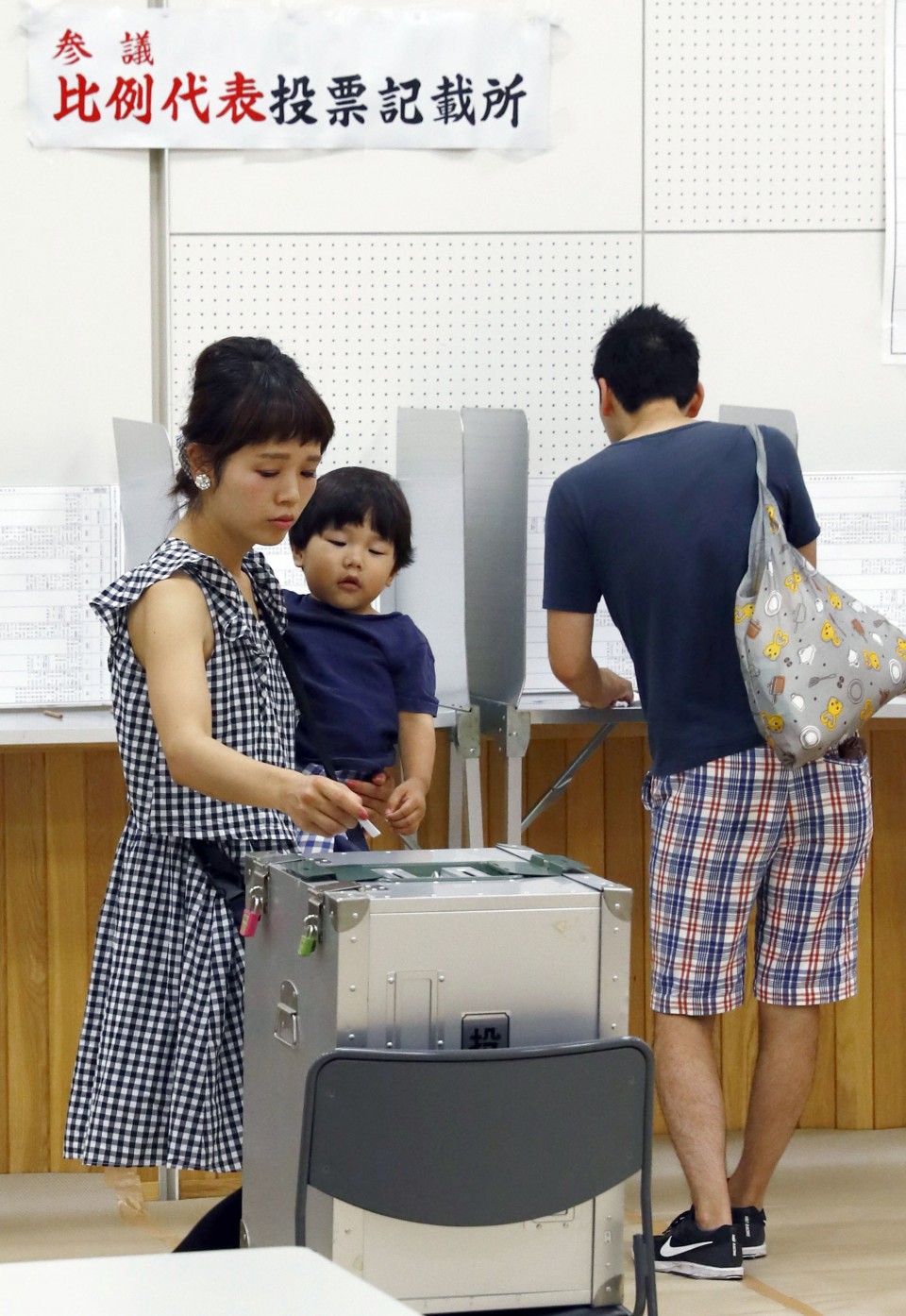 With 370 candidates vying for the 124 seats, 74 were chosen from single- and multiple-seat constituencies and 50 through proportional representation. The election was held as the six-year terms of half of the upper house members expire on July 28.

The big winner among the opposition parties was the main opposition Constitutional Democratic Party of Japan, which had held nine of the seats up for grabs but ended the contest with 17.

"We will create an environment in which we can offer voters the choice of a change in government in the next lower house election," CDPJ leader Yukio Edano said on a TV program.

The Japan Innovation Party, which backs Abe's constitutional reform plan, won 10 seats, up from seven, while the Democratic Party for the People garnered six, down from eight and the Japanese Communist Party won seven, down from eight.

Among minor groups, Reiwa Shinsengumi, a political group established by the actor-turned-upper house member Taro Yamamoto, got two seats, although the leader himself failed to win.

NHK Kara Kokumin Wo Mamoru To (The Party to Protect the People from NHK) also gained one seat, with its leader Takashi Tachibana, a former employee of NHK, formally called Japan Broadcasting Corp., successfully running in the proportional representation system.

The party's primary goal is to abolish the public broadcaster's collection of subscription fees and switch to a pay-per-view system for its programs.

Opposition parties, in a bid to counterbalance the LDP, fielded unified candidates in all of the 32 single-seat constituencies. The LDP won in 22, while the opposition camp won in 10.

Turnout for voting for candidates standing in the electoral constituencies fell to 48.80 percent, the second lowest on record since 44.52 percent in 1995. In the proportional representation section, turnout was 48.79 percent, according to the Internal Affairs and Communications Ministry.

One of the main issues in the election campaign was the government's plan to raise the consumption tax from 8 percent to 10 percent. Abe recently decided to go ahead with the tax hike in October, even as a U.S.-China trade war casts a shadow over the economic outlook.

More than six and a half years of "Abenomics" economic policy mix have brought the economy back on a recovery path but growth remains slow with tepid consumer spending.

The LDP and Komeito said during the campaign that the tax hike is necessary to generate revenues for expanding child-care support as promised. Opposition parties such as the CDPJ are against the tax increase, saying their focus is on protecting households.

Amid the rapid graying of the population, Japan's public pension system also emerged as a major issue since the government's refusal to accept a report by a Financial Services Agency panel, providing the opposition with ammunition to attack Abe's government for trying to hide an inconvenient truth.

The panel estimated that an average retired couple would face a shortfall of 20 million yen ($185,000) under the current pension system if they live to be 95 years old. This conflicted with the government's insistence that the pension system is basically adequate to support post-retirement life.

Due to electoral reform, the number of seats in the upper house will increase by six to 248 in 2022. Of the six, three were added this time to bring the total number of seats to 245. 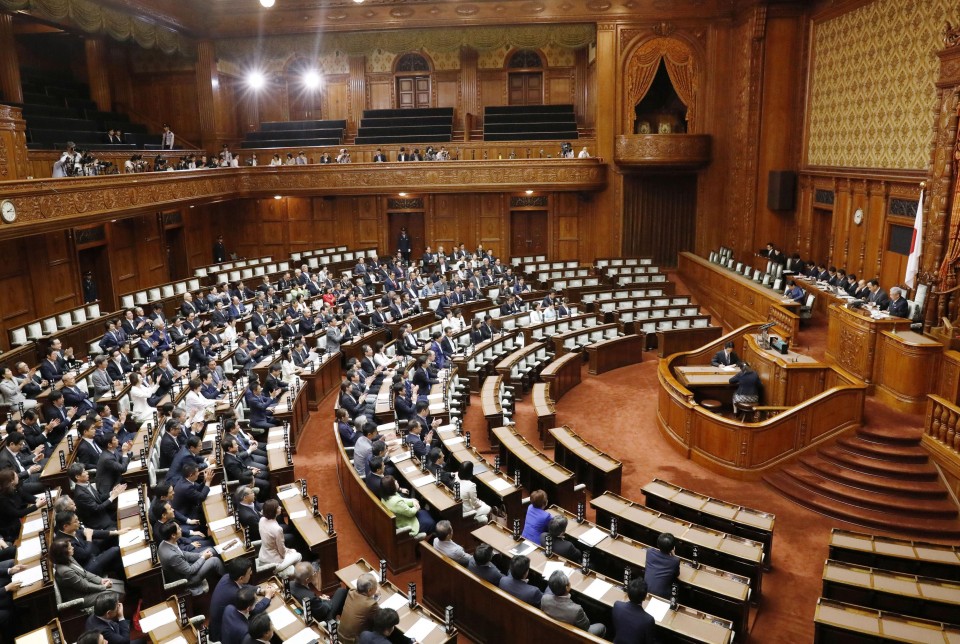 Lawmakers in the House of Councillors, the upper chamber of Japan's bicameral legislature, serve six-year terms. An election, in which half of the chamber's seats are contested, takes place every three years.

Members of the upper house serve a full term, unlike lawmakers in the House of Representatives, or lower house, which a prime minister can dissolve for an election at their discretion.

Voters cast two ballots in the election -- one to choose electoral district representatives for 74 of the upper house's 124 contested seats, and one under a proportional representation system to fill the remaining 50 seats with parties' list candidates.

Under the proportional representation system, voters write in either the name of a political party or a specific candidate from contenders registered by parties in an open-list system.

List seats are allocated to parties in proportion to the number of ballots they receive, either in the name of the party or candidates on their list.

Under the revised election law, a "special quota" is being introduced for the proportional representation system for the first time, through which candidates can also be elected according to their place on a list submitted by each party, regardless of the number of votes they get.

Parties often field list candidates with a degree of public fame, such as celebrities, scholars or athletes, to draw a large number of votes.

Candidates cannot run in an electoral district and under the proportional representation system at the same time, unlike those running in lower house elections.

The minimum voting age was lowered to 18 from 20 in an amendment effective since 2016.