Extending his track record of election victories for the ruling Liberal Democratic Party, Prime Minister Shinzo Abe has secured the political stability he needs to become the longest-serving leader in November. But it came with a bitter taste.

The ruling bloc of the LDP and its partner Komeito, together with like-minded independent lawmakers, lost its two-thirds majority in the upper house in Sunday's election, likely thwarting his ambitions to revise the pacifist Constitution and go down in history as the first leader to do so.

As he pursues the policies that he hopes will define his administration and his legacy in the years to come, his "Abenomics" program also comes into focus, though its success looks to be increasingly hanging in the balance.

The planned consumption tax hike in October and most recently a spat with South Korea over Japan's export curbs may cloud the economic outlook, according to economists.

"The LDP got a pass mark. But that doesn't mean voters are satisfied with current politics or they backed revising the Constitution," said Masahiro Iwasaki, a political science professor at Nihon University.

"Prime Minister Abe is unlikely to give up...and will likely chart a course toward a constitutional revision but gaining approval from the Diet won't be easy, let alone from the public," Iwasaki added. 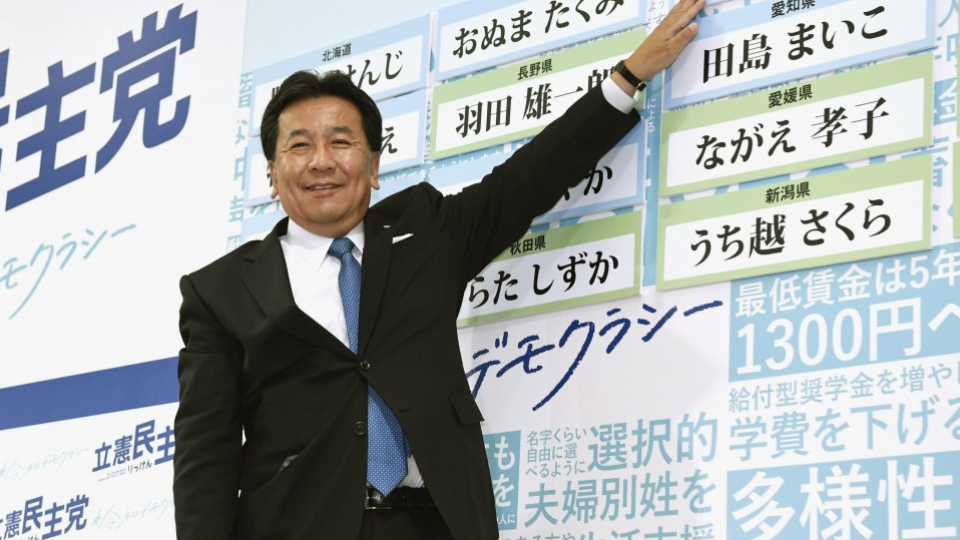 (Yukio Edano, leader of the Constitutional Democratic Party of Japan, smiles at the party's election operations center in Tokyo following the House of Councillors election on July 21, 2019.)

During 17 days of official campaigning, Abe stressed the need to clarify the status of the Self-Defense Forces to end the country's debate over its legality. Japan's SDF is considered an armed organization for self-defense.

"Wasn't it the case that SDF personnel were the first ones that put their lives at risk to save the lives of Japanese people at the time of the Great East Japan Earthquake (in 2011)?" Abe said in a stump speech on the final day of the campaign on Saturday.

Opposition parties have expressed their aversion to changing the war-renouncing Article 9, making parliamentary debate difficult. Abe has his work cut out as Komeito also has reservations about changing the pacifist clause.

Yu Uchiyama, a professor of political science at the University of Tokyo, said Abe may be tempted to woo lawmakers from the Democratic Party for the People to join the pro-amendment camp.

"Chances are that Abe will ditch Article 9 and choose other options this time because he apparently wants to go down in history as the prime minister who revised the Constitution," Uchiyama said.

Even if parliament does approve a proposal for constitutional reform with some support from the opposition camp, it also has to be approved by a majority in a national referendum, which political analysts say would divide the country.

With his current term as LDP president coming to an end in September 2021, Abe will likely weigh carefully his long-held goal against the risk of undermining the political capital he accumulated while he prioritized reviving the economy.

In October, Abe has to go ahead with the consumption tax hike from 8 percent to 10 percent and any economic deterioration will keep him fully occupied, according to economists.

Martin Schulz, a senior research fellow at the Fujitsu Research Institute, said Abenomics has improved the economy "significantly" but its success hinges on whether the government can shift more of its focus to microeconomic policies.

Emerging as a concern for Asia's global supply chains is the recent escalation of bilateral tensions with South Korea over Tokyo's tightening of export controls over some materials used in producing chips and displays.

"If the long-term basis for business and trust is being affected by political fights, companies will lose on both sides at a time when globalization is under fire from other forces already," Schulz said. "Much of the political and economic capital Japan has built over the last years could be lost," he said.

As results started coming in, Abe said Sunday that winning a two-thirds majority was not his target in the first place. The important thing, he said, is to build a consensus with opposition parties.

"Throughout the campaign, I, as party leader, explained my view (on constitutional reform)," Abe told a TV program. "I take the result as voters saying that the issue should be discussed more thoroughly."