A 61-year-old man with Lou Gehrig's disease won a seat in Sunday's upper house election, the first time in the country a person with the progressive neurological disease has been elected as a Diet member.

Yasuhiko Funago, who has had the disease also known as amyotrophic lateral sclerosis for almost 20 years, ran on the ticket of new political group Reiwa Shinsengumi for a six-year term in the House of Councillors.

At a press conference in a Tokyo hotel, he said in a message read by his caregiver, "I am overwhelmed with emotion to know that the time has come" to become a Diet member.

"I may look frail, but I am exceptionally spirited because I am putting my life on the line." 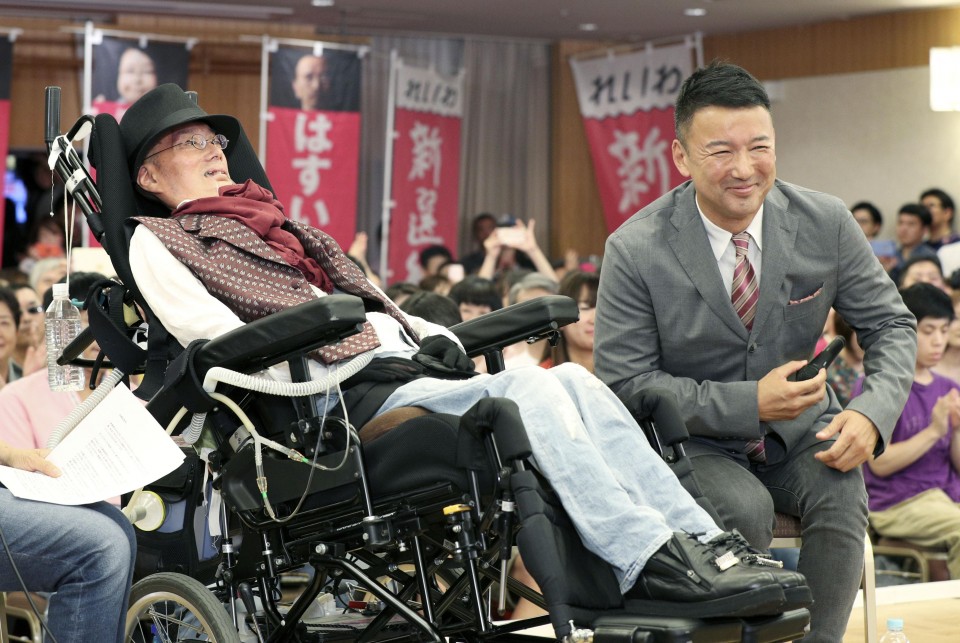 (Taro Yamamoto, right, leader of newly created political group Reiwa Shinsengumi, smiles at a hotel in Tokyo on July 21, 2019, after his party's candidate and amyotrophic lateral sclerosis patient Yasuhiko Funago, left, wins a seat through proportional representation in the House of Councillors election.)

Funago has been using an artificial respirator since 2002 and uses a sensor that he bites to manipulate a computer in order to write and give lectures.

A House of Representatives lawmaker in the past developed the motor neuron disease while serving his term, but Funago will be the first person already diagnosed with the disorder to become a Diet member. He ran in a national election for the first time.

It is also rare internationally for an ALS patient to become a national lawmaker, according to the Japan Amyotrophic Lateral Sclerosis Association.

Yamamoto, 44, placed Funago and Eiko Kimura, 54, who has cerebral palsy, in the first and second positions on his group's proportional representation list, aiming to highlight disability issues. Kimura also won a seat.

The political group has criticized the Liberal Democratic Party led by Prime Minister Shinzo Abe for failing to lift Japan out of deflation, and called for the abolition of the consumption tax, which the coalition government of the LDP and Komeito plans to raise in October. It also promised financial relief for households, such as by raising minimum wages.