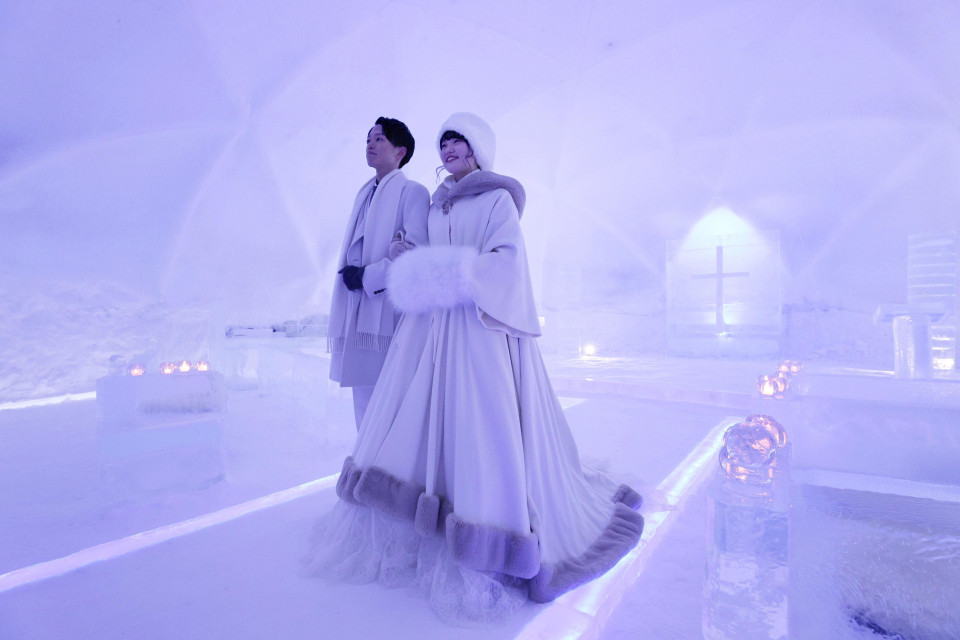 Photo taken on Jan. 19, 2023, in Shimukappu, a village in northern Japan known for its cold temperature that can fall as low as 30 C below zero, shows the inside of a chapel where the ceiling, walls, altar and cross are all made of ice. The chapel was unveiled to the media, together with a dome-shaped hotel also made of ice at Hoshino Resorts TOMAMU, a day before its public opening. (Kyodo) ==Kyodo

TOKYO - Japanese Prime Minister Fumio Kishida said Friday that he has instructed health ministry experts to promote discussions on a possible downgrade of the legal status of the novel coronavirus to the same level as seasonal influenza this spring.

In Japan, COVID-19 is currently categorized as a Class 2 disease, the same status as tuberculosis and avian influenza, and is subject to extensive measures, including limitations on the movements of infected people and their close contacts.

TOKYO - Japan resubmitted a gold and silver mine complex on Sado Island for the UNESCO World Heritage list after amending flaws indicated by the organization from a previous application made last year, the Japanese culture minister said Friday, against the wishes of South Korea.

The mine complex in Niigata Prefecture was one of the world's largest producers of gold in the 17th century but has been a cause of tension with South Korea as it claims the site is linked to wartime forced labor of Koreans. The announcement was met with protests from the South Korean government.

TOKYO - Core consumer prices in Japan gained 4.0 percent in December from a year earlier, the highest level since 1981 and twice the pace envisaged by the Bank of Japan, as higher food and energy prices increasingly squeeze household budgets, government data showed Friday.

The core consumer price index excluding volatile fresh food items was above the BOJ's 2 percent inflation target for the ninth straight month, underscoring persistent inflationary pressure despite the central bank's view that it is only transitory.

The Beijing Olympic normal hill champion's first win came in the 14th World Cup event of the 2022-23 season. It was his 28th career World Cup victory.

China's gas imports from Russia double in 2022 amid Ukraine crisis

China's pipeline gas imports from Russia soared some 2.6 times from the previous year to $3.98 billion in 2022, while that of LNG imports jumped some 2.4 times to $6.75 billion, according to the Chinese General Administration of Customs.

TOKYO - The number of suicides in Japan in 2022 rose from the previous year, pushed up by the first increase among men in 13 years, preliminary government data showed Friday.

Deaths among men rose by 604 to 14,543, leading to 21,584 suicides in the country overall, an increase of 577 from the previous year. Numbers remained elevated for the past few years during the COVID-19 pandemic.

TAIPEI - Taiwan has decided to recognize same-sex marriages between its citizens and their foreign partners even if the partners' countries do not allow same-sex marriage, in a shift from its previous interpretation.

FUKUOKA - A police order that forbade Susumu Terauchi from approaching his ex-girlfriend Miki Kawano did not stop the suspect from fatally stabbing the woman on a Fukuoka street earlier this week, in another case of a stalking victim falling prey to a predator despite having sought the protection of authorities.

Terauchi, 31, who was working at a bar, was arrested on suspicion of stabbing Kawano, 38, around a dozen times Monday evening near JR Hakata Station, a major rail hub in the southwestern Japan city.

TOKYO - Scientists believe a trace amount of water discovered in an asteroid sample collected by a Japanese space probe could provide clues to the origins of life on Earth.

Since the Hayabusa2 returned with the sample from the Ryugu asteroid in December 2020, several important discoveries have been made -- most notably analysis confirming the presence of substances seen as the building blocks of life on the asteroid, such as liquid water and organic matter.

MELBOURNE - Japan's Yoshihito Nishioka reached the fourth round of a Grand Slam tennis tournament for the first time in his career Friday with a straight-sets win over Mackenzie McDonald of the United States at the Australian Open.

The 31st-seeded, left-handed Nishioka won 7-6(6), 6-3, 6-2, converting six of 16 break points while being broken twice. McDonald made 53 unforced errors against 33 for Nishioka at Melbourne Park.