The Bank of Japan will maintain an ultralow rate policy amid heightened uncertainty over the global economy caused by policy tightening in other economies, while keeping close tabs on the financial market impact of rate hikes overseas, Governor Haruhiko Kuroda said Monday.

In a speech to business leaders in the central Japan city of Nagoya, Kuroda stuck to the view that a recent pickup in inflation, driven mainly by higher commodity prices and a weaker yen, will not be sustained, even as the nation has seen a broadening of price hikes by companies. 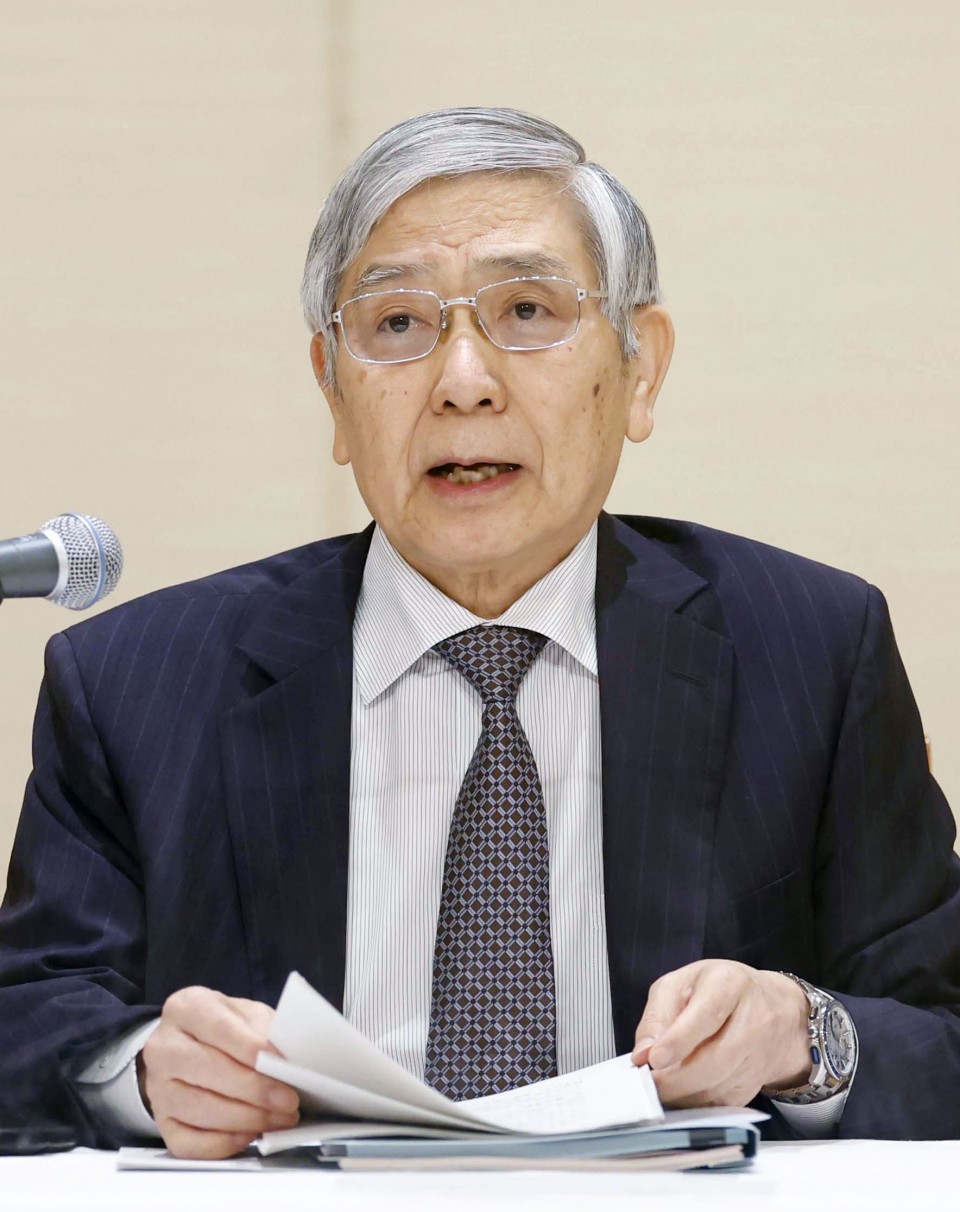 The central bank has said its 2 percent inflation target should be attained in a stable and sustainable fashion supported by robust wage growth. Despite the headline inflation figure in Japan topping that threshold in recent months, Kuroda has ruled out the possibility of a near-term interest rate hike because inflationary pressure is expected to ease.

"At present, the Bank of Japan deems that it should continue with monetary easing and thereby firmly support economic activity," Kuroda said in his speech.

"By doing so, it aims to provide a favorable environment for firms to raise wages and to achieve the price stability target in a sustainable and stable manner, accompanied by wage increases," he said.

As the BOJ's monetary policy, partly blamed for accelerating the yen's sharp decline of late, has come under greater scrutiny, Kuroda has stressed the need to retain the existing policy framework to foster wage growth, a key factor in achieving inflation supported by strong demand.

Monetary tightening in advanced economies like the United States and the eurozone has raised concern about a global economic slowdown. Kuroda said it is necessary to "carefully monitor" the impact of such moves, including adjustments in asset prices and capital outflows from emerging economies.

Market participants have been on alert for any signs of slower policy tightening. In recent days, the yen has risen sharply against the U.S. dollar, in a reversal of its sharp decline to a three-decade low, as markets expect the Federal Reserve to be less aggressive in hiking interest rates.

"The government has intervened in the foreign exchange market multiple times and the abnormally one-sided and rapid weakening of the yen appears to be taking a pause. I believe this, in and of itself, is a very good thing," Kuroda told a press conference after his speech.

"Commodity prices have already started to trend lower and the strong dollar will not last forever. Under such circumstances, it is certain that the impact of higher import costs will wane," he added.

Most of the recent rise in consumer price inflation came as companies passed on rising import costs, inflated by the weaker yen.

While the yen's rapid decline has created a headache for resource-scarce Japan, the economy likely grew in the July-September quarter, though at a much slower pace than in the preceding three months.

The BOJ chief said the economy will be aided by the emergence of demand that had been depressed by the COVID-19 pandemic and a recovery of inbound tourism going forward.

For the economy to see stronger demand, wage growth will be vital as the recent bout of inflation is weighing on consumer sentiment.

"The rises in prices to date will likely be reflected to a considerable extent in the outcomes of the next annual spring labor-management wage negotiations," Kuroda said, while noting that wage developments should be carefully examined.