Bank of Japan Governor Haruhiko Kuroda on Thursday dismissed the idea of remaining at the helm of the central bank beyond his current term that ends next April, saying he has no such desire.

Kuroda, speaking in parliament, stressed the need to maintain monetary easing to support the economy, a point he also made when he later met with Prime Minister Fumio Kishida.

To attain the BOJ's 2 percent inflation target in a stable manner, wages need to grow further, the governor said, even as Japan's core inflation has stayed above that threshold for the past six months. 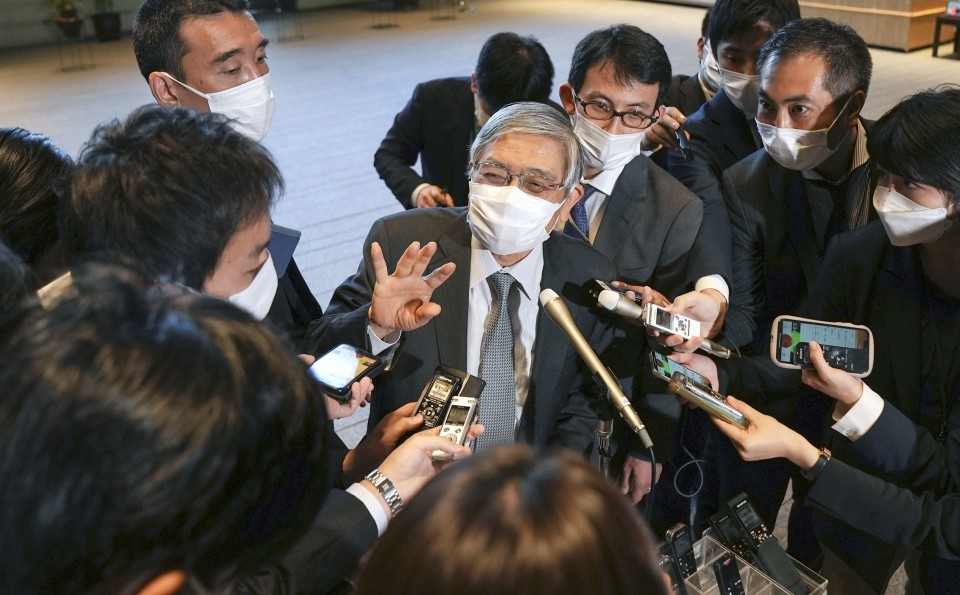 Bank of Japan Governor Haruhiko Kuroda speaks to reporters after having talks with Japanese Prime Minister Fumio Kishida at the premier's office in Tokyo on Nov. 10, 2022. (Kyodo)

"I will have served for 10 years in total next April after my second term. I don't harbor a desire for reappointment at all," Kuroda told a session of the House of Councillors.

If the BOJ's current forecasts stand, Kuroda will see his term end without achieving the long-elusive inflation target. Since he became governor in 2013, the BOJ embarked on powerful monetary easing by gobbling up Japanese government bonds.

In recent years, the central bank has set short-term interest rates at minus 0.1 percent, while guiding 10-year Japanese government bond yields to around zero percent. Its persistently dovish stance has been blamed for accelerating the yen's decline amid a global policy tightening trend to rein in soaring inflation seen in advanced economies.

Opposition party lawmakers have taken aim at the BOJ's monetary policy for its perceived failure to meet the inflation goal, putting Kuroda in the hot seat. The governor, for his part, recently said he had "no intention" of stepping down before the end of his term.

Kuroda told the parliamentary session on Thursday that it is "too early" to discuss an exit from monetary easing. But when the time comes, the pace of interest rate hikes and reduction of the central bank's swollen balance sheet will be the major points of discussion.

"The rise in consumer prices will likely stay below 2 percent in the next fiscal year and the year after that, so we have not reached a point where we can discuss and show our exit strategy," Kuroda said. "But the important points would be the pace of raising policy rates and adjusting the expanded balance sheet."

The U.S. Federal Reserve recently went ahead with its fourth 0.75 percentage point rate hike, and the European Central Bank has also hiked rates.

The BOJ maintains that the recent bout of inflation, mainly due to surging import costs caused by higher commodity prices and the weaker yen, will not last. More robust wage growth is critical for the 2 percent target to be attained in a way that the central bank wants to see, Kuroda said.

"I explained to the prime minister that we will continue with monetary easing to achieve the price stability target sustainably and stably, accompanied by wage growth," Kuroda told reporters at the prime minister's office after his meeting with Kishida.

Kishida, who has placed priority on wealth redistribution, is calling for companies to raise wages to keep pace with accelerating inflation. The government has approved an economic package to alleviate the pain on households of rising prices.

The recent depreciation of the yen has added to the woes of resource-scarce Japan by inflating import costs, prompting Japanese authorities to step into the market, both announced and unannounced, to arrest the currency's decline.

"The recent one-sided, rapid weakening of the yen we've seen is unfavorable for the economy, which I told the prime minister," Kuroda said.

The yen, which had earlier slipped past the psychological barrier of 150 to the dollar, was trading in the 146 zone on Thursday. It is far from 125.71, the average rate for fiscal 2022 set by Japanese firms in a BOJ survey.

The dollar has been gaining broadly, reflecting a strong U.S. economy, but aggressive rate hikes could lead to negative economic growth going forward, according to Kuroda.

"It's not correct to expect the dollar's broad strength to last long," he told parliament.