The Bank of Japan on Friday maintained its ultralow interest rates as widely expected, swimming against a global trend of monetary tightening, as it attempts to navigate what it sees as a temporary cost of living crisis amid higher commodity prices and a weak yen.

Reflecting the impact of rising import costs of energy, raw materials and other goods, the BOJ revised upward its core consumer inflation outlook for the current fiscal year to next March to 2.9 percent from its earlier projection of 2.3 percent. It would be the fastest pace of increase in 41 years on a fiscal year basis.

At the end of a two-day policy meeting, the Policy Board decided to maintain short-term interest rates at minus 0.1 percent while guiding 10-year Japanese government bond yields to around zero percent. 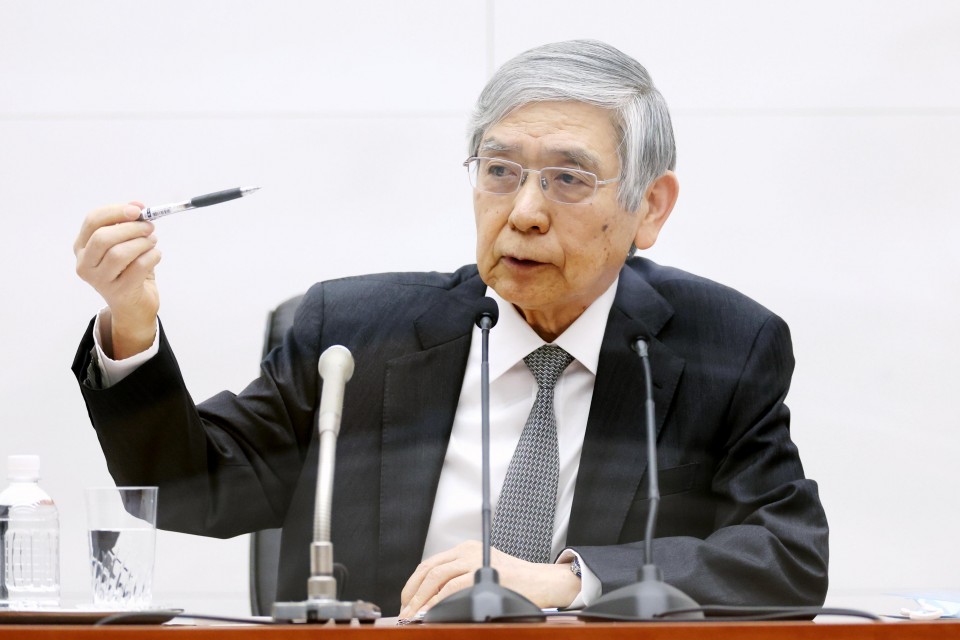 It will continue to buy 10-year bonds at a fixed rate of 0.25 percent every business day to prevent the benchmark yield from rising above that threshold and to maximize the effect of monetary easing.

"We judge it appropriate to continue with our monetary easing policy in order to support the economy, so that we can reach our 2 percent price stability target in a way that's sustainable and support wage growth," BOJ Governor Haruhiko Kuroda told a press conference after the policy meeting.

"It's true that we are closer to the 2 percent (inflation) target than before. That said, the target will not be achievable" even in fiscal 2023 and 2024, Kuroda said, maintaining the view that raising interest rates is not an option in the near future.

Rising inflation is making it increasingly difficult for the BOJ to justify its claim that monetary easing, not tightening, is the right path for the economy when consumers are feeling the pinch of more expensive goods and their income is not keeping pace.

The perceived dilemma for the BOJ is that its dovish policy stance, which contrasts sharply with its global peers that have been raising interest rates for some time, has been accelerating the yen's sharp depreciation and inflating import prices.

"It is necessary to pay due attention to developments in financial and foreign exchange markets and their impact on Japan's economic activity and prices," the BOJ said.

The central bank noted the risk that global financial conditions, through adjustments in asset prices and foreign exchange rates along with capital outflows from emerging economies, will tighten and slow global economic growth.

The European Central Bank on Thursday went ahead with another rate hike to tame inflation, which jumped nearly 10 percent in September, with the U.S. Federal Reserve also expected to raise rates further in its November policy meeting.

The BOJ maintains that the current bout of inflation has been caused by higher commodity prices and import costs and it believes monetary easing is necessary. But it faces the formidable challenge of transitioning such cost-push inflation into inflation driven by domestic demand and more robust wage growth in its effort to achieve its 2 percent inflation target in a sustainable and stable fashion.

The government has already intervened in the currency market to preempt the yen's freefall against the U.S. dollar and will continue to give short-term assistance to households by reducing utilities bills beyond the winter heating season.

For the future policy outlook, the BOJ retained its closely-watched language, saying that it will not hesitate to take additional easing steps if necessary and that it expects short- and long-term interest rates to "remain at their present or lower levels."

During the press conference, Kuroda said that the yen's rapid, one-sided depreciation is "undesirable and negative" for the Japanese economy.

Asked whether the yen's fall, if it proceeds steadily, would help lift people's inflation expectations and anchor them at around 2 percent, Kuroda said, "I don't see it as a big chance."

The yen weakened into the 147 range against the U.S. dollar after the press conference. It neared 152 earlier in the month, its weakest level in over three decades.

Kuroda has ruled out the possibility of raising interest rates in the near future as the inflation target is still out of reach and the economy is in the midst of a recovery. The economic growth forecast for fiscal 2022 was cut to 2.0 percent from 2.4 percent.

The key gauge of inflation has stayed above 2 percent for half a year in Japan and core consumer prices in Tokyo -- an indicator of what to expect nationwide -- leaped 3.4 percent in October, the fastest pace in over 40 years, the government said Friday.

The BOJ said in its fresh outlook report that inflation is expected to pick up pace toward year-end but slow toward the middle of fiscal 2023, in line with Kuroda's recent statement that it will undershoot the 2 percent target in the next fiscal year.

Based on the latest projections, Kuroda will see his term as BOJ chief end next April without achieving the 2 percent inflation target after more than a decade of monetary easing. Core CPI will likely gain 1.6 percent from a year earlier in both fiscal 2023 and 2024.

Despite the drag of higher commodity prices, Japan's economy has "picked up" amid the waning impact of COVID-19 and is expected to continue recovering, the BOJ said, maintaining its assessment.