Japanese authorities' latest currency intervention, its second in a month, provides a fresh reminder that the rapid depreciation of the yen beyond the psychologically key barrier of 150 to the dollar is a cause for alarm.

The Finance Ministry declined to comment but monetary authorities stepped into the market, according to sources familiar with the matter. Japanese Finance Minister Shunichi Suzuki had said Japan was "strictly facing off against speculators."

Still, the underlying driver of the yen's weakness -- or the dollar's broad strength -- is unlikely to change soon, as the Bank of Japan is a laggard in the global trend of monetary tightening to rein in surging inflation. That divergence is expected to be confirmed when the Japanese central bank holds a two-day policy meeting from Thursday, analysts say.

The first intervention to buoy the yen in 24 years on Sept. 22, which cost up to 2.84 trillion yen ($19 billion), caught many off guard but its impact soon petered out. After Friday's move by authorities to step in again, the yen traded around 147.70 to the dollar, still far from 145.90 at which Japan intervened last month and weaker than 125.71, the level expected by Japanese firms in the current business year. 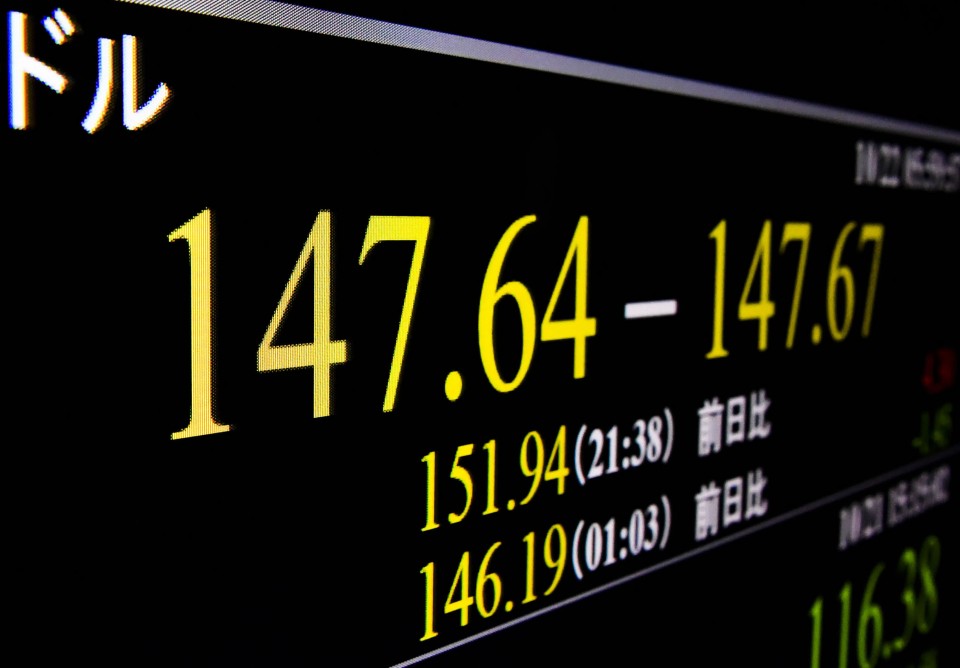 A monitor screen in Tokyo shows the Japanese yen trading in the 147 zone after surging against the U.S. dollar. (Kyodo)

Behind the yen's relentless decline of late are the fragility of the Japanese economy and its declining competitiveness -- something that cannot be reversed immediately.

The combination of inflation and the weaker yen, both at levels unseen in over three decades, is unlikely to sway the BOJ, which is deeply committed to maintaining ultralow interest rates to aid the economy amid surging commodity prices.

"We need to firmly support the economy and achieve our (2 percent) price stability target in a sustainable and stable manner, accompanied by wage growth, by persisting with monetary easing," BOJ Governor Haruhiko Kuroda said at an event on Friday, hours before the yen neared 152 to the dollar.

The BOJ, however, faces the difficulty of justifying its argument that the recent cost-push inflation is temporary. The central bank also needs to secure the understanding of wary households that its ultralow interest rate policy is the right path to pursue at a time when the yen's weakness, a byproduct of the BOJ's dovish tilt, has been increasingly accelerating inflation by raising import costs for the resource-poor nation, analysts say.

"Kuroda, who used to serve as the country's top currency diplomat, knows the struggles Japan faced when the yen was way stronger. He has begun to underscore the mixed blessings of the weaker yen recently, but he cannot go against it...after years of monetary easing," said Mari Iwashita, chief market economist at Daiwa Securities Co.

The pace of price hikes is far slower in Japan than in the United States and the eurozone, with core consumer inflation, excluding volatile fresh food items, hitting 3.0 percent in September, the sharpest rise since 1991 when the special effects of sales tax hikes are excluded.

In focus is whether households can withstand the persistent inflationary pressure, a rarity in a country long mired in deflation, while wage growth is still lagging. Prime Minister Fumio Kishida has ordered the crafting of a new economic package to ease the pain.

"From a consumer perspective, the weaker yen has far more negatives than positives," said Yoshiki Shinke, senior executive economist at the Dai-ichi Life Research Institute. "Food prices are rising, so are the prices of imported items such as durable goods."

Shinke expects the core consumer price index to hit 3.5 percent as early as October -- a 40-year high -- and stay above 3 percent at least until next January, though uncertainty remains over how much of an impact a travel discount program to spur domestic tourism will have on the headline figure.

Despite signs of inflation picking up, economists at UBS Securities Japan expect Governor Kuroda will not "pivot to tighten the policy or amend the current policy tools" even though criticism of his stance that tightening is not necessary at this stage because inflation will slow has grown among opposition lawmakers.is a cause for alarm. 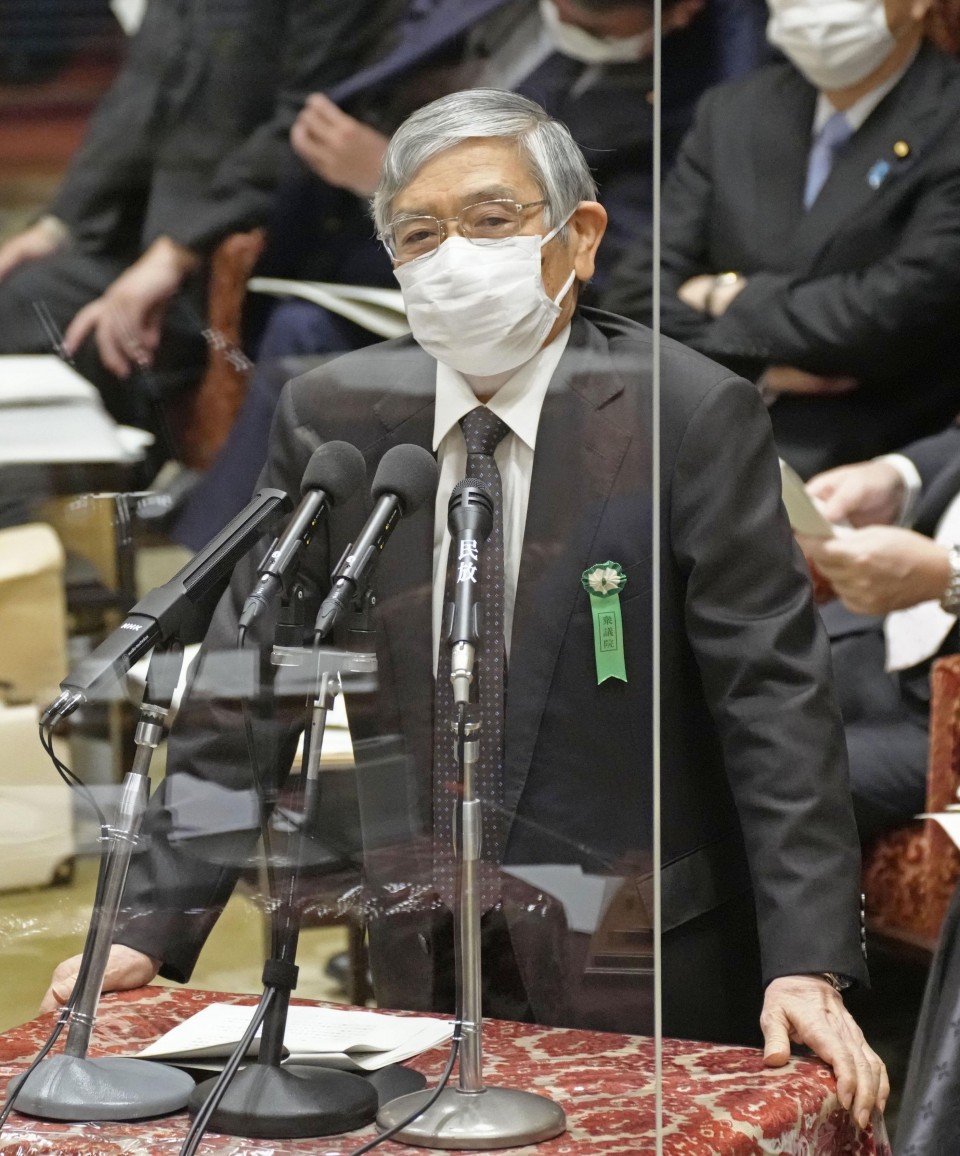 Bank of Japan Governor Haruhiko Kuroda speaks during a House of Representatives Budget Committee session in Tokyo on Oct. 18, 2022. (Kyodo)

But Masamichi Adachi, an economist at UBS Securities, said in a recent report, it should still be "too early to judge" that conditions for sustainable 2 percent inflation will be attained early next year, with the prospect of wage growth limited.

The BOJ has been swimming against the global tide of monetary tightening, while the U.S. Federal Reserve has been aggressively raising interest rates in its fight against soaring inflation.

A headwind for Japan is U.S. President Joe Biden's statement that he is "not concerned" about the dollar's strength, ahead of key midterm elections in November.

"We can't expect an immediate reversal of the (weak yen) trend, given that Kuroda has not changed his tone. Growth will likely slow in the United States and China in the months ahead, and this would give the BOJ reason to maintain its ultralow rate policy, too," Daiwa Securities' Iwashita said.

Rising U.S. Treasury yields have been pushing up the dollar-yen pair. In fact, the BOJ has had to step up its fight to defend its upper 0.25 percent cap on the 10-year Japanese government bond yield under its yield curve control program.

A weak yen is not all negative because it boosts profits earned by Japanese exporters overseas in yen terms. As the currency depreciates to historic levels, the government is pinning its hopes on the return of foreign tourists and increased farm exports as benefits of the weaker yen.

The missing link in the Japanese economy is robust wage growth for the BOJ to attain its inflation target stably and change its policy stance. Kishida is calling for wage growth that keeps pace with inflation and his government, along with the BOJ, is seeking to shield the economy from inflation caused by external factors, not strong domestic demand.

"For now, there is no political pressure on the BOJ to change its policy. This would change if criticism about the weaker yen grows further," Shinke said.

Yen briefly surges to 146 vs. dollar amid another intervention