Ainu dance to be featured for tourists visiting Hokkaido's Obihiro

Indigenous Japanese Ainu people from Obihiro, Hokkaido, are working with local entities to develop dance-inspired tourism attractions for launch in 2024 as part of travel packages.

They held a trial show recently in which members of a local Ainu culture preservation society -- Obihiro Kamuy To Upopo Preservation Society -- danced to modern music in an evening space spectacularly lit by fire.

In the summer, they hosted a tour to introduce their hunting culture in an effort to secure another source of income.

The trial show was held on the evening of Oct. 1 at a special stage set up in the garden of Obihiro Centennial City Museum. Bonfires cast light across the performers as some 30 tourism-related guests watched on.

Clad in ethnic dress, the society members performed five types of dance, including "ku rimse" dance about hunting with bow and arrow, to mellow electronic music. 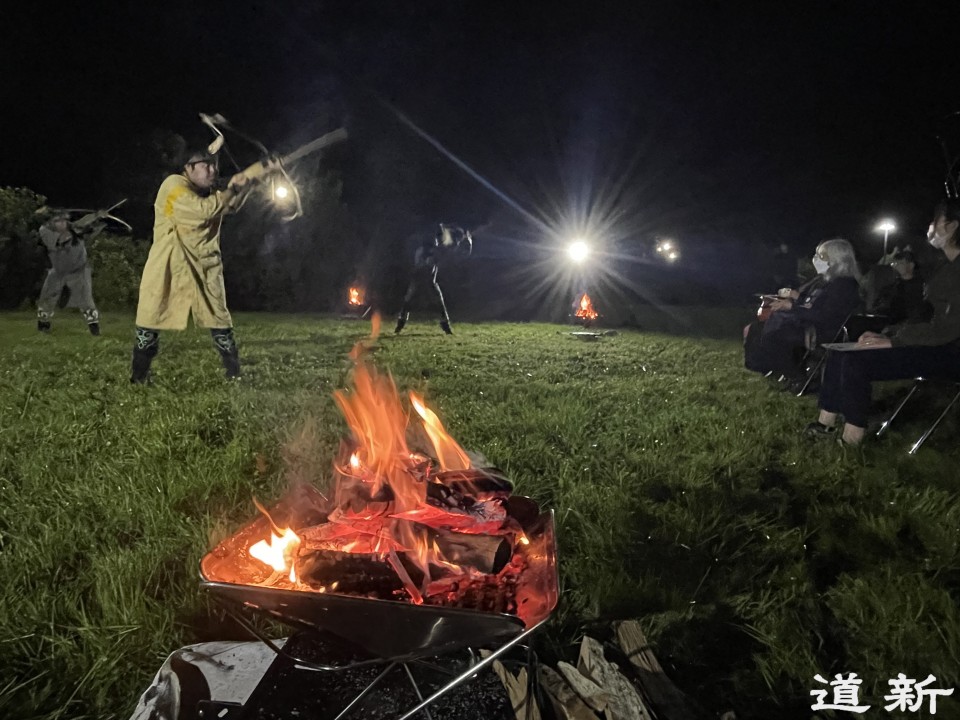 The organizing body Obihiro Council for the Promotion of Ainu Traditional Dance and Cultural Tourism, which also includes the city office and a travel business group, emphasizes that these programs are "approachable."

The show is being produced to create a fantastical mood by combining modern background music with fire and lighting, it says, adding that tourists are invited to join in the dances at the end.

"It's a good opportunity for Ainu dance to become widely known. Above all, dancing outside gives a sense of freedom and is fun for us, too," said Nanako Sakai, 71, who heads the Ainu society.

The organization, formed in 2021, is working with a budget of 5.2 million yen ($35,000) in this fiscal year through March 2023, including subsidies from the Cabinet Office and Hokkaido Tourism Organization as well as city funding.

It aims to give tourists more options in the evening while helping the Ainu people secure income.

The society plans to host the dance show on weekends from June to September from 2024 after more trial runs during fiscal 2023.

The expected adult ticket price is 1,800 yen and performances in other municipalities are also possible, with a trial on Oct. 30 at the Tokachigawa Onsen hot spring area in the neighboring town of Otofuke.

In August, the society introduced wild grasses that the Ainu traditionally ate and other aspects of their culture in a mini tour that was part of a trip arranged by a major travel agency.

"It is important to have a system that allows Ainu people to show their unique qualities and earn money from them. We want to continue supporting their traditional activities," said an official of the city's tourism section.

Newlyweds get the Pokemon seal of approval in Hokkaido