An installation named "Pumpkin" by renowned contemporary artist Yayoi Kusama has been returned to a small island town in the Seto Inland Sea in western Japan after it was washed away by high waves during a typhoon last year.

A replacement 2-meter-tall, 2.5-meter-wide decorated yellow pumpkin creation was reinstalled on a jetty in Naoshima, Kagawa Prefecture, with residents and others involved celebrating the return of a "symbol of the island" at an unveiling ceremony Oct. 4. 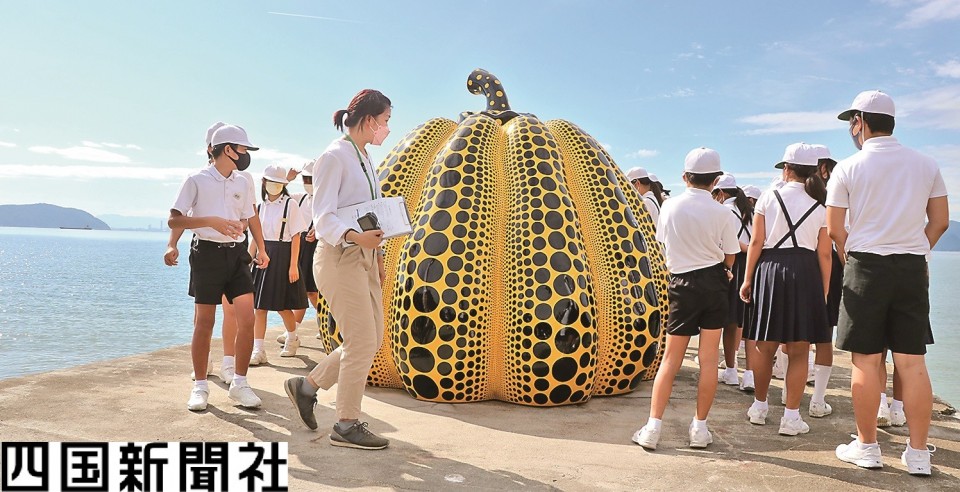 The fiber-reinforced art piece had been a permanent fixture on the jetty since 1994, but August 2021's Typhoon Lupit broke it free from the metal fixings that held it in place.

It was later retrieved from a nearby shore by Benesse Holdings Inc., a company in neighboring Okayama involved in artistic and other projects. It was decided the damage to the original piece was too severe for it to be fixed, so Kusama's team reproduced another of the same design and size.

To ensure there is no repeat, the pumpkin was made stronger and a feature was added that allows it to be removed with heavy machinery if bad weather is approaching.

"The artwork has helped disseminate the charms of Naoshima to the world," Mayor Shinichi Kobayashi said in the ceremony to unveil the half-year project.

Among local school children invited to the ceremony, second-year junior high school student Kurea Horiguchi said, "I'm glad that the symbol of the island is back."