A group of cycling enthusiasts peddled along parts of a popular 88-temple pilgrimage stretching across Shikoku Island in southwestern Japan earlier this month to conduct safety checks, with the hopes of creating a tourist cycling experience that takes in the Shikoku Henro route.

Divided into five groups, the 13 cyclists inspected a total of 370 kilometers along five sections of the route in Kagawa and Tokushima prefectures on Aug. 11. The pilgrimage is associated with Kukai (774-835), a revered Buddhist priest also known as Kobo Daishi.

One of the groups started from Zentsuji, temple No. 75 of the 88 on the pilgrimage, in Zentsuji city. After praying for safety at the temple, the participants cycled about 100 km to Shidoji, temple No. 86 in Sanuki city. Along the way, they checked on safety, rest stops, scenery and other aspects of the route while recording their cycling data using a GPS app. 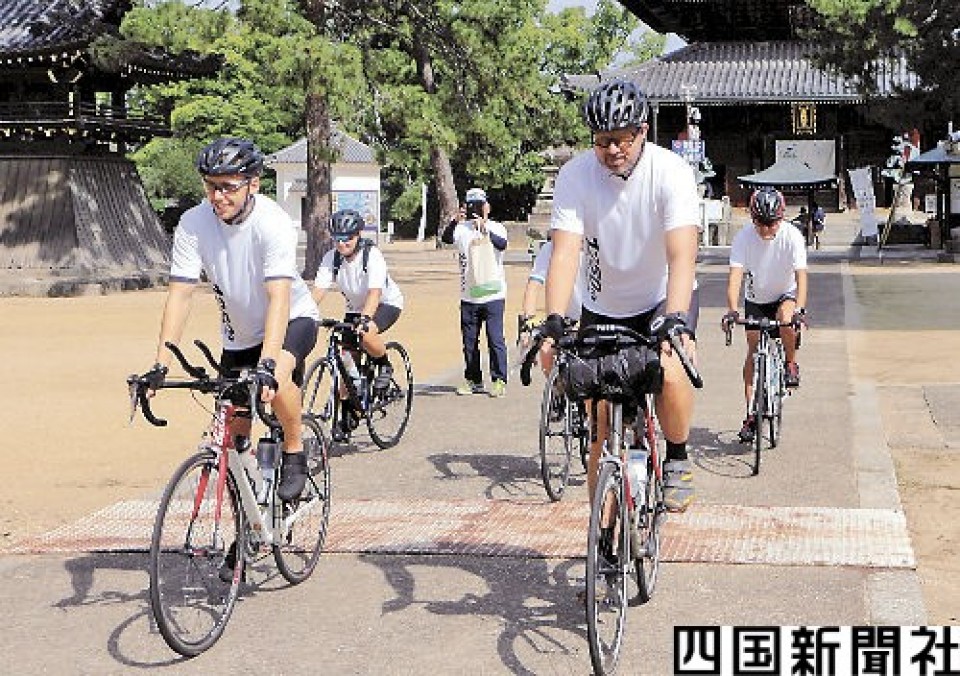 A group of cyclists start from Zentsuji to conduct safety checks along a section of the popular 88-temple pilgrimage stretching across Shikoku Island.

Norman White, who resides in Takamatsu and joined the event with his wife, said that while the Shimanami Kaido is most well-known when it comes to cycling routes in Shikoku, he hopes more people will also get to know the splendid roads of Kagawa so that pilgrimage by bicycle will become a popular option for visitors.

With this year's ride held as a trial, the organizers hope to hold a full-fledged event next year that covers the entire Shikoku area under the pilgrimage route.

Hidefumi Ishii, a former employee of the Zentsuji municipal government and who was involved in the operations of a bicycle relay race along the pilgrimage, was the one who came up with the idea and he sought the help of cycling enthusiasts and bicycle shops.

Currently, a walking event is held every February along the pilgrimage to check on the route’s safety, and Ishii wants to establish a cycling version of that.

The plan is to divide the total distance of about 1,350 km into 15 sections next year and have cyclists in each section conduct inspections.

Taking on the pilgrimage by bicycle offers a greater degree of freedom and flexibility when compared to going on foot, Ishii said.

"And compared to going by car, cycling makes it easier to interact with other people along the way and one can also feel a sense of accomplishment from traveling with your own physical exertion," he added.

"With next year being the 1,250th anniversary of the birth of Kobo Daishi, I hope the event will help unite Shikoku as one and bring excitement to the region," Ishii said.