Yokozuna Terunofuji pulled out of the Autumn Grand Sumo Tournament on Tuesday after suffering injuries to both his knees, with the sport's lone top-ranked wrestler requiring three weeks to recover.

The Mongolian-born 30-year-old, who lost to No. 4 maegashira Takayasu on Monday for his fourth defeat at Ryogoku Kokigikan, has been showing signs of discomfort in his long-troubled right knee this month.

"He's been wrestling with pain-killing injections. It's not about having a rest, he needs to heal it properly," his stablemaster Isegahama said. 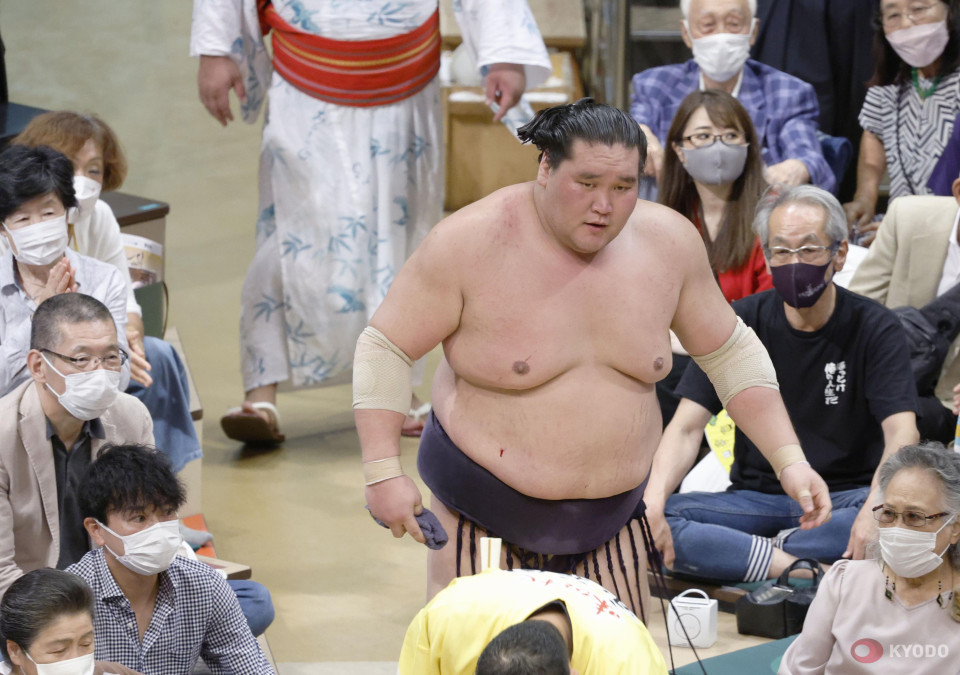 Yokozuna Terunofuji is pictured following his defeat to Takayasu on the ninth day of the Autumn Grand Sumo Tournament at Tokyo's Ryogoku Kokugikan on Sept. 19, 2022. (Kyodo)

"He could require a surgery in a certain scenario. Both knees are bad but especially his right. The bone is completely out of place."

Terunofuji, who dished out "kimboshi" to four rank-and-file maegashira, will take his fifth defeat by default on Tuesday to sekiwake Daieisho to end the meet with a 5-5 record.

It is the second time in seven meets Terunofuji has withdrawn since winning promotion to the sport's highest rank ahead of the 2021 Autumn meet. The grand champion has won three Emperor's Cups as a yokozuna with his last coming at the Summer meet in May.

It is the 13th tournament withdrawal in Terunofuji's injury-plagued career which has seen the Ulaanbaatar native overcome major health obstacles including surgical reconstruction of both knees and illness.

The fitness issues dropped Terunofuji, who wrestled in the second highest rank of ozeki from July 2015 to November 2017, to sumo's fifth-tier jonidan division in March 2019 before he climbed all the way back to the elite makuuchi division in July 2020.