First-time champion Ichinojo was rewarded for his July triumph Monday by earning re-promotion to komusubi in the Japan Sumo Association's ranking published ahead of the Autumn Grand Sumo Tournament from Sept. 11 at Tokyo's Ryogoku Kokugikan.

The 1.92-meter 211-kilogram Mongolian, a former sekiwake who wrestled as a No. 2 maegashira in Nagoya, will move up two spots as he returns to the three "sanyaku" ranks below yokozuna for the first time since last November.

In an alignment sumo hasn't seen for 23 years, the JSA has opted to go with three wrestlers at sekiwake, the sport's third-highest rank, and three at komusubi, one rung below. 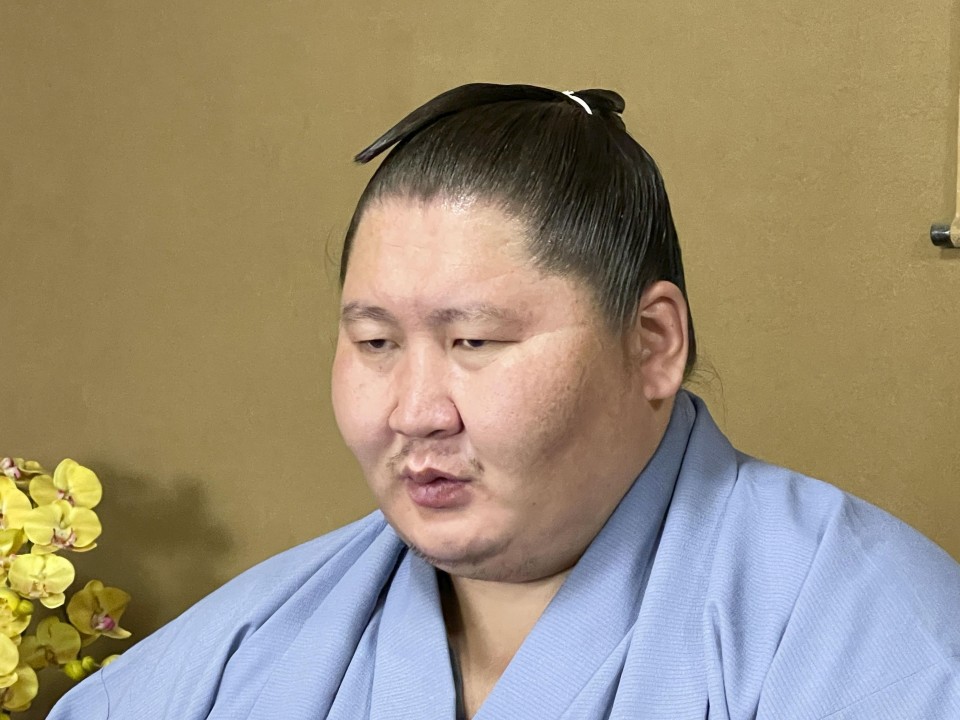 Ichinojo holds an online press conference at his stable in Kawaguchi, Saitama Prefecture, on Aug. 29, 2022. (Photo courtesy of the Japan Sumo Association)(Kyodo)

Terunofuji, who will be looking for his eighth grand tournament title and his first since May, sits atop the rankings as the sole yokozuna.

The ozeki trio is led by Takakeisho, who remains in the No. 1 slot on the more prestigious east side of the rankings after 11 wins in July. Shodai, who went 10-5 in Nagoya, is in the top west spot.

The third ozeki, Mitakeumi, joined a large exodus of wrestlers at the Nagoya tournament, who withdrew following infections within their stables. He sits below Shodai on the west.

Hoshoryu, the nephew of former Mongolian yokozuna Asashoryu, moves up from komusubi to the west sekiwake spot, across from Wakatakage, who remains the top sekiwake on the east. Daieisho moves below him on the east side.

Abi moves over from the west side to lead the komusubi trio, with Ichinojo in the top west slot and Mongolian Kiribayama below him on the west side after moving up from No. 1 maegashira.

At the other end of the rankings, Mongolian Mitoryu will make his debut in the elite makuuchi division as a No. 16 maegashira after going 9-6 as a fourth-ranked wrestler in the second-tier juryo division in July.

Former komusubi Ryuden returns for the first time since a three-month suspension in June 2021 for breaking coronavirus rules. He won his second juryo championship in three tournaments in July and will return as a No. 12 maegashira.