No. 8 maegashira Hokutofuji improved to 9-0 at the Autumn Grand Sumo Tournament on Monday, with No. 3 Tamawashi also coming out on top in his bout to stay a win back.

No. 4 Takayasu, No. 10 Nishikifuji and No. 14 Chiyoshoma all won to improve to 7-2, while no one from sumo's top four ranks has more than six wins as the crowd witnessed another day of upsets at Tokyo's Ryogoku Kokugikan.

Hokutofuji used his left hand to push the throat of Wakamotoharu (6-3) only to see the No. 6 rank-and-filer hold his ground and make a few steps forward. 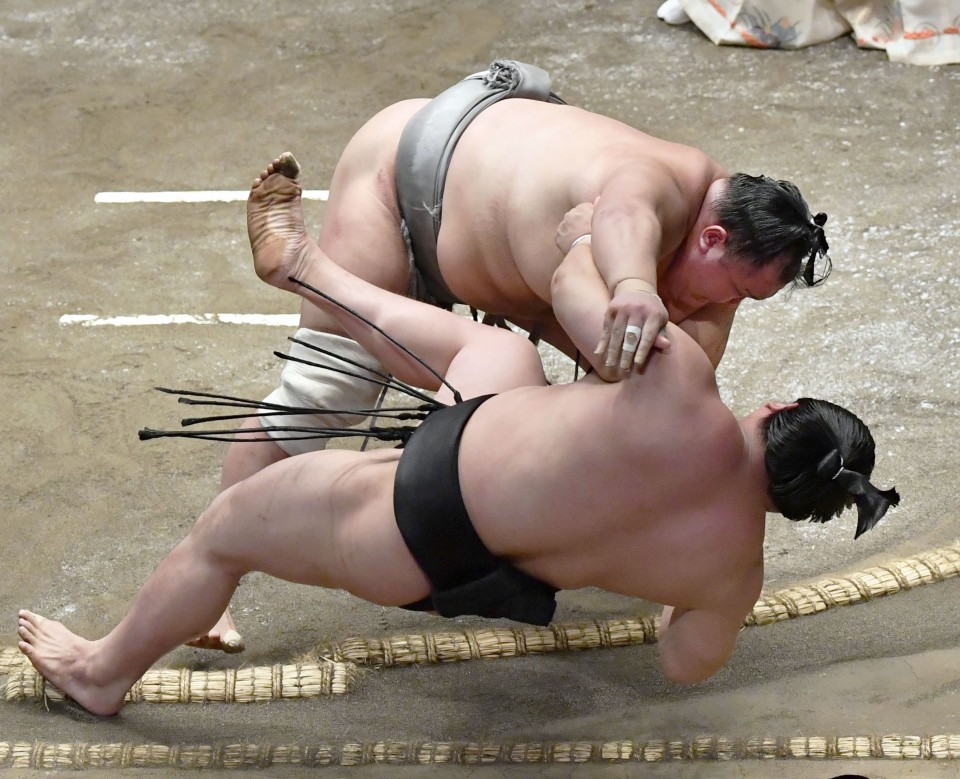 But Hokutofuji quickly halted his opponent's attack and resumed charging forward, driving Wakamotoharu to the edge before slamming him down.

Tamawashi (8-1) more than matched a strong opening charge from Meisei (3-6) and pushed the backpedaling No. 2 around before crushing him out at the edge.

Yokozuna Terunofuji (5-4) was handed another loss as the grand champion failed to muster his usual tenacity, as former ozeki Takayasu (7-2) outlasted the yokozuna and pushed him out.

All three ozeki also lost. Takakeisho (6-3) took a step backward in the title race after his opening drive lacked the power to oust komusubi Kiribayama (6-3).

Kiribayama grabbed the front side of Takakeisho's belt with both hands to go on the offensive, the ozeki lost his footing, and fell backward in a crush-out defeat.

Shodai (1-8) lost his eighth straight bout to ensure a losing record at the 15-day tournament, failing to exploit his height and weight advantage against stocky but creative No. 3 Ura (6-3), who pulled him down.

The ozeki will need eight wins to keep his rank in November in Fukuoka, while demotion-threatened Mitakeumi (3-6), who needs eight wins here, could fall from the ozeki ranks at this tourney after showing little grit in a one-sided thrust-out defeat against sekiwake Daieisho (3-6).

Wakatakakage (6-3) won his sixth straight bout as the sekiwake kept No. 4 Nishikigi (4-5) off his belt en route to a solid force-out win.

Sekiwake Hoshoryu (4-5) quickly reeled off a right underarm throw but was upended instead when No. 5 Sadanoumi (5-4) countered with a left overarm throw.