Nagasaki marked the 77th anniversary Tuesday of the U.S. atomic bombing of the southwestern Japan city during World War II, with Mayor Tomihisa Taue calling for the abolition of nuclear weapons amid mounting concern over their potential use following Russia's invasion of Ukraine.

The atomic bombing of Nagasaki, three days after a similar bomb was dropped on Hiroshima around 300 kilometers to the northeast, had taken the lives of an estimated 74,000 people by the end of 1945, with many others suffering from the effects of burns and radiation-related illnesses long after the attack.

A moment of silence was observed at 11:02 a.m., the exact time on Aug. 9, 1945, when a plutonium bomb codenamed "Fat Man" dropped by a U.S. bomber exploded over the port city, only the second time a nuclear weapon has been used in war. 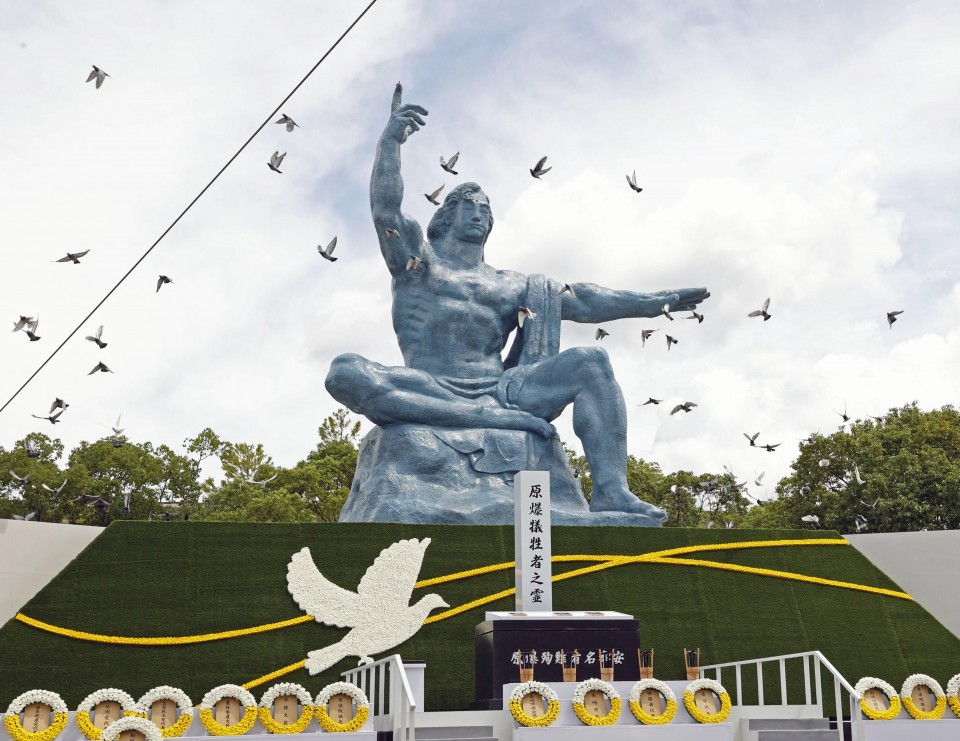 Doves are released at Peace Park in Nagasaki, southwestern Japan, on Aug. 9, 2022, during the annual ceremony marking the 77th anniversary of the U.S. atomic bombing of the city.  (Kyodo)

In a Peace Declaration delivered during a memorial ceremony at the city's Peace Park, the mayor called on nuclear weapons states to present a "concrete" way forward to achieve nuclear disarmament at the ongoing review conference of the Nuclear Non-Proliferation Treaty.

Taue also demanded that the Japanese government lead discussions on a possible nuclear weapons-free zone in Northeast Asia as well as sign and ratify a U.N. treaty banning nuclear weapons.

Japan has ruled out its participation in the treaty along with other countries that rely on the U.S. nuclear umbrella to deter nuclear attacks, as have the nuclear powers. But some U.S. allies participated in the first meeting of parties to the pact in June as observers. 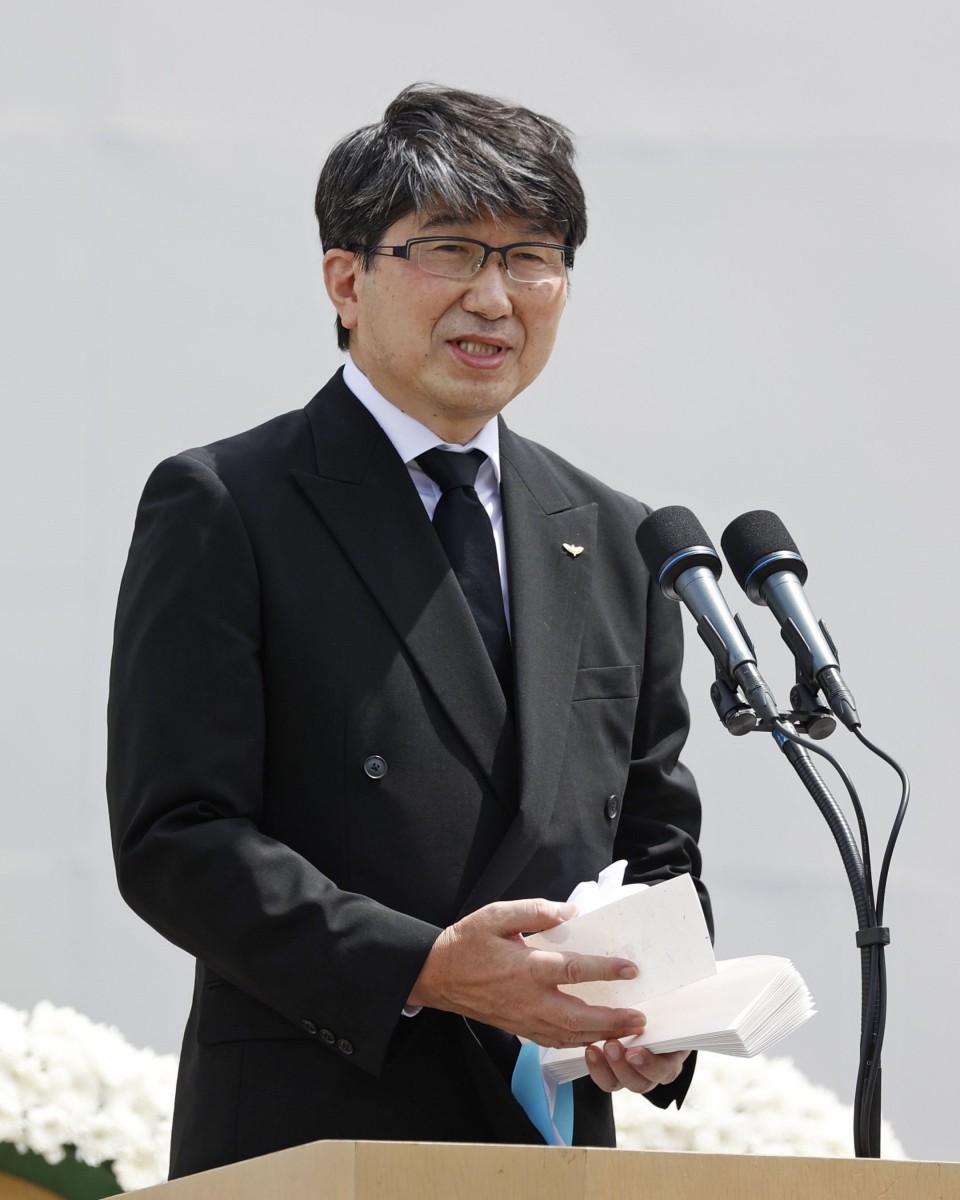 Nagasaki Mayor Tomihisa Taue delivers a speech at a ceremony marking the 77th anniversary of the U.S. atomic bombing of Nagasaki at Peace Park in the southwestern Japan city on Aug. 9, 2022. (Kyodo)

Soon after the start of the war in Ukraine in late February, President Vladimir Putin put Russia's nuclear force on high alert, igniting worldwide concern about a first use of nuclear weapons in war since 1945.

The threats made by Russia have "shown the world that use of nuclear weapons is not a groundless fear but a tangible and present crisis," the mayor said.

Prime Minister Fumio Kishida, who represents a constituency in Hiroshima and has expressed readiness to work toward a world free of nuclear weapons, said, "Even in the midst of a severe security situation, we must continue our history of non-use of nuclear weapons and continue to make Nagasaki the site of the last atomic bombing." 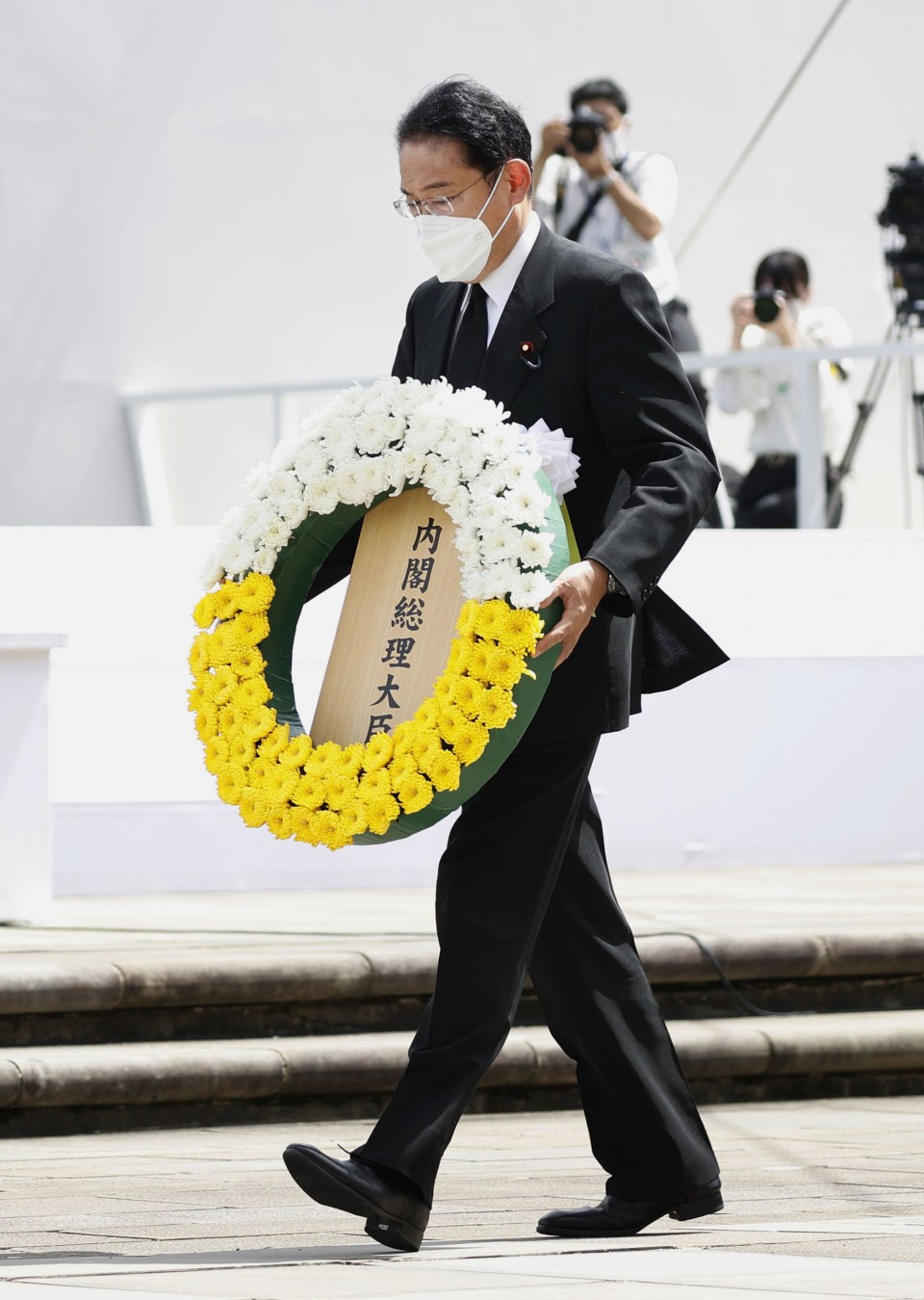 Japanese Prime Minister Fumio Kishida offers a wreath during the annual ceremony marking the 77th anniversary of the U.S. atomic bombing of Nagasaki at Peace Park in the southwestern Japan city on Aug. 9, 2022. (Kyodo)

Representatives from a record 83 nations and regions participated in the ceremony, while Russia and Belarus, which is aiding Moscow in the Ukraine war, were not invited. The larger number likely reflects the "desire for peace that has been made stronger by the Russian aggression," a city official said.

From the United Nations, Izumi Nakamitsu, who serves as undersecretary general and high representative for disarmament affairs, attended on behalf of Secretary General Antonio Guterres. 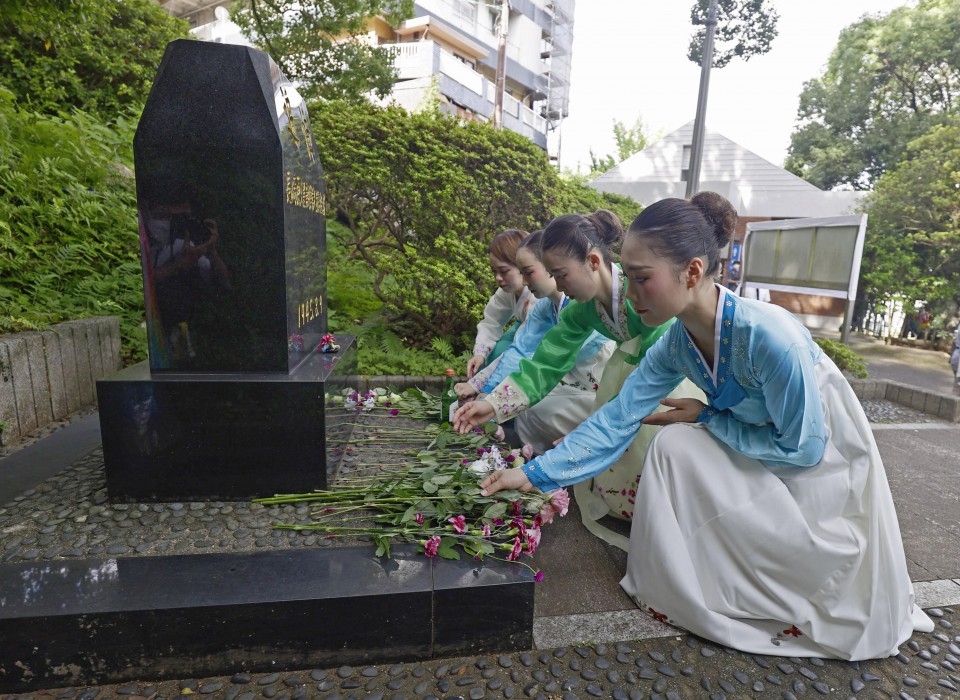 People offer flowers in Nagasaki on Aug. 9, 2022, at a monument commemorating Korean victims of the U.S. atomic bombing of the southwestern Japan city on the same day 77 years earlier during World War II. (Kyodo) ==Kyodo

In his message, Guterres said nuclear conflict "has been brought back into the realm of possibility," and, "The Russian invasion of Ukraine reminds us that we are, at any time, just minutes from possible annihilation."

Tuesday's ceremony was on a larger scale than last year's as restrictions to stem the spread of COVID-19 have been eased nationwide, but a reduced capacity was maintained. About 1,600 people attended amid tight security following the fatal shooting of former Prime Minister Shinzo Abe last month.

In the Peace Park, atomic bomb survivors and relatives of the victims gathered to offer prayers, some with flowers in their hands, from the early morning as cicadas sang in the trees. 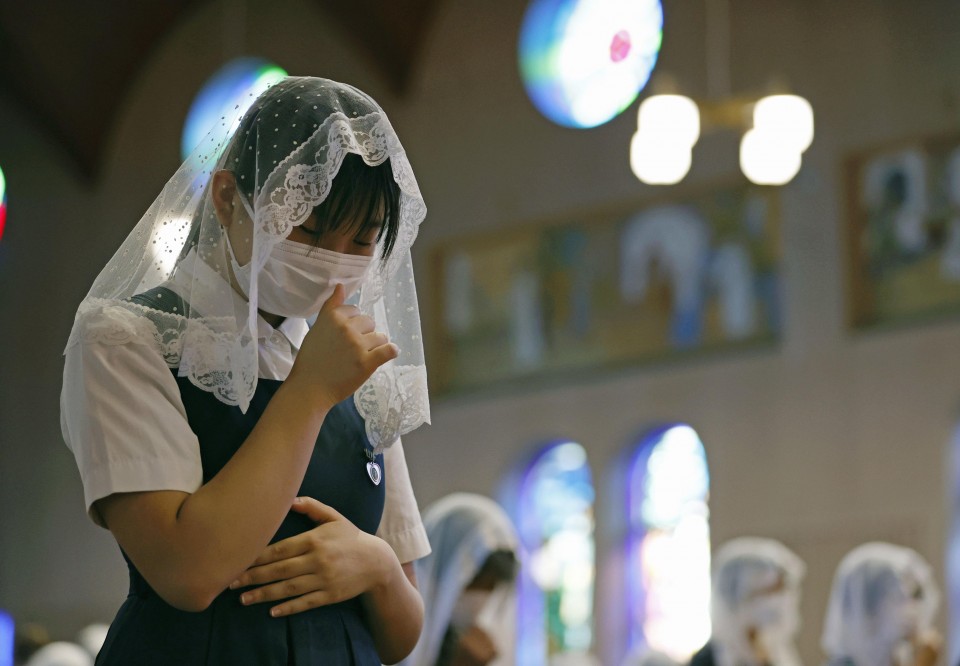 A woman prays during a memorial mass at Urakami Cathedral in Nagasaki on Aug. 9, 2022, the 77th anniversary of the U.S. atomic bombing of the southwestern Japan city in the closing days of World War II. (Kyodo) ==Kyodo

"I heard a loud boom and saw a bright flash on that day even though I had escaped to an air raid shelter after seeing a plane approach," said Michiko Kaida, 89. She said she was around 8 kilometers from the hypocenter with her friends.

"It is difficult for me to recall that day and the aftermath. It was so devastating," she said.

"Nuclear weapons would destroy the world. There are no winners and they should be abolished as soon as possible. I cannot stand what Mr. Putin is saying about his country's nuclear weapons."

Kishida said in a post-ceremony press conference that the government intends to include some forms of cancer in coverage for a medical subsidy provided to people who experienced the Nagasaki bombing outside of a government-designated area around ground zero.

Unlike officially recognized survivors who were within the area at the time of the bombing, such people receive only limited benefits and, as they are of advanced age, have been calling for a swift improvement in relief.

Kishida said he will order the health ministry to consider what forms of cancer should be included, so the subsidy program can start covering related medical bills in April. 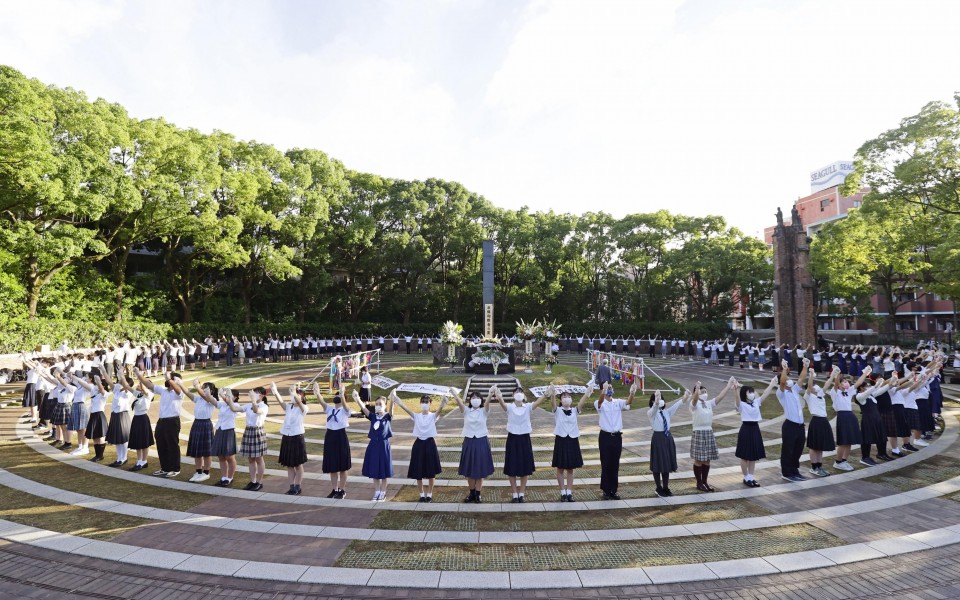 High school students form a human chain around the hypocenter cenotaph in Nagasaki on Aug. 9, 2022, the 77th anniversary of the U.S. atomic bombing of the southwestern Japan city during World War II. They used ribbons to avoid contact amid the coronavirus pandemic. (Kyodo) ==Kyodo

He then visited the Nagasaki Atomic Bomb Museum near the park, the first visit by an incumbent prime minister since it was rebuilt in 1996. The museum features a replica of Urakami Cathedral's sidewall that was exposed to the blast, among other items.

In the year through the end of July, the city confirmed the deaths of 3,160 atomic bomb survivors. Its list of those officially recognized as victims of the atomic bombing now bears the names of 192,310 people.

The combined number of officially recognized survivors of the two nuclear attacks, known as hibakusha, stood at 118,935 as of March, down 8,820 from a year earlier, the Ministry of Health, Labor and Welfare said. Their average age was 84.53.

The following is a gist of the Nagasaki Peace Declaration read Tuesday by Mayor Tomihisa Taue at a ceremony to mark the 77th anniversary of the atomic bombing of the city.

-- Russia's invasion of Ukraine and threats of using nuclear weapons have shown the world their use is not a groundless fear but a tangible and present crisis.

-- Nuclear weapons exist, so they can be used. Ridding ourselves of nuclear weapons is the only realistic way of protecting the Earth and humankind's future.

-- Nuclear weapon states are required to reaffirm promises made in the Nuclear Non-Proliferation Treaty and show a concrete process for nuclear arms reduction.

-- The Japanese government is urged to lead the debate toward the opposite of nuclear dependency, including promoting a Northeast Asia Nuclear-Weapon-Free Zone concept, rather than toward "nuclear sharing" or other forms of dependency on nuclear weapons.

-- The Japanese government is asked to sign and ratify the U.N. treaty banning nuclear weapons.

-- The government is asked to provide, as a matter of urgency, improved support for atomic bomb survivors and relief measures for those who experienced the atomic bombings but have not yet received official recognition as survivors.