U.N. Secretary General Antonio Guterres warned on the 77th anniversary of the atomic bombing of Hiroshima on Saturday that a new arms race is accelerating and it is "totally unacceptable" for countries with nuclear weapons to even "admit the possibility" of using them.

Guterres became the first serving U.N. chief to visit Hiroshima since 2010. In a flurry of activity, he conversed with atomic bomb survivors, met with Mayor Kazumi Matsui and toured the Hiroshima Peace Memorial Museum with Prime Minister Fumio Kishida.

"Crises with grave nuclear undertones are spreading fast -- from the Middle East, to the Korean Peninsula, to Russia's invasion of Ukraine," Guterres said in his speech at an annual memorial ceremony in the Peace Memorial Park. 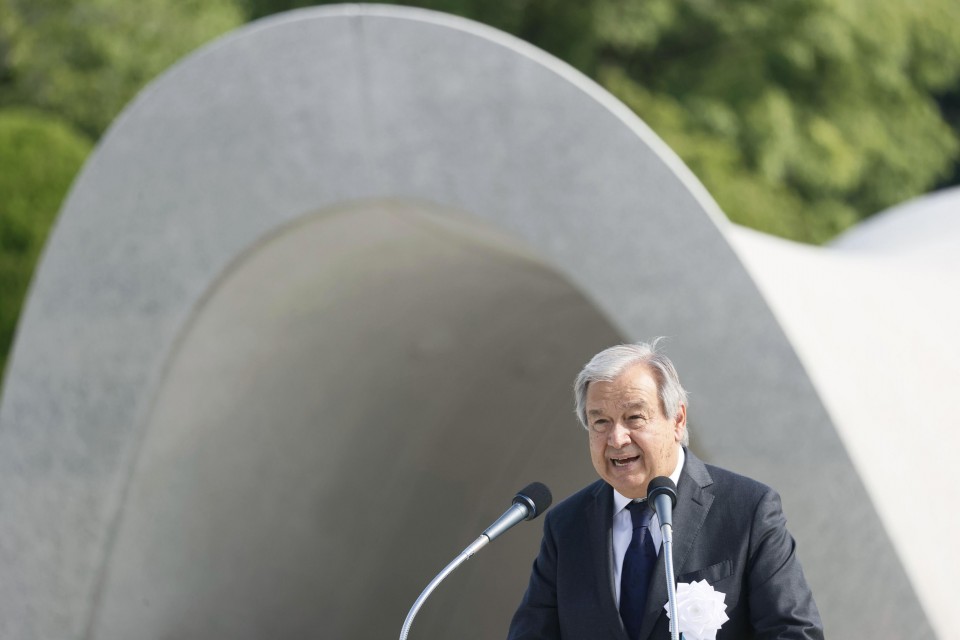 U.N. Secretary General Antonio Guterres delivers a speech at a ceremony to mark the 77th anniversary of the U.S. atomic bombing of Hiroshima on Aug. 6, 2022, at the Peace Memorial Park in the Japanese city. (Kyodo)

"Humanity is playing with a loaded gun."

Likely on his mind were concerning developments in Russia, where President Vladimir Putin ordered nuclear forces on high alert soon after launching a war against Ukraine in late February, in North Korea, which is said to be preparing for a seventh nuclear test, and in Iran, which according to the International Atomic Energy Agency is rapidly making progress in its nuclear ambitions.

Guterres also said nuclear powers must commit to a "no first use" of nuclear weapons, in the first reference by a U.N. secretary general to the principle of not using such weapons of mass destruction unless attacked with them first, according to a U.N. official.

The U.N. chief later said in a press conference that he would be "very happy" if all the countries that have nuclear weapons could adopt the principle, expressing hopes for the summit meeting of the Group of Seven nations next May in Hiroshima in moving forward stalled disarmament talks.

With regard to the first meeting of parties to the Treaty on the Prohibition of Nuclear Weapons held in the Austrian capital Vienna in June, Guterres said participants met "to develop a road map towards a world free of these doomsday weapons."

He called on state parties to the Nuclear Non-Proliferation Treaty who are meeting in New York to review the pact's implementation to "work urgently to eliminate the stockpiles that threaten our future."

"We must keep the horrors of Hiroshima in view at all times, recognizing there is only one solution to the nuclear threat. Not to have nuclear weapons at all," Guterres said. 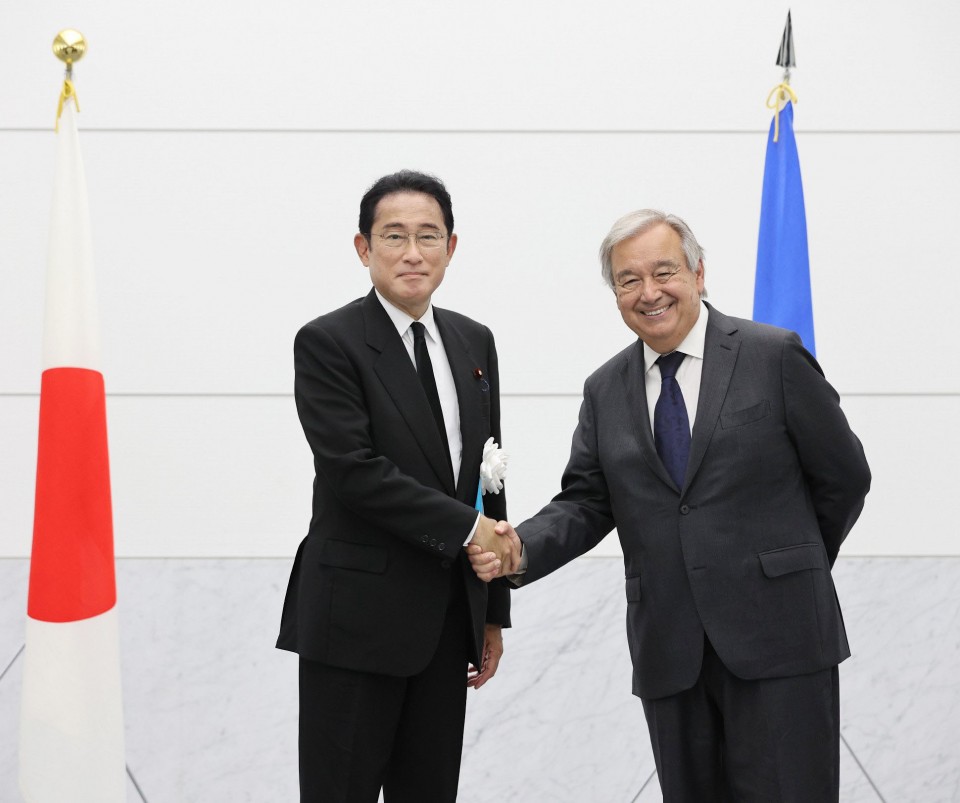 The U.N. chief also urged young people to finish the work started by the hibakusha survivors and others physically affected by nuclear radiation in Japan and to heed their message.

At the outset of their talks at the museum, Kishida told Guterres that as the only nation to have experienced a nuclear attack, Japan "needs to lead the world toward one free of nuclear weapons."

Guterres responded that he believes Japan can lead with moral authority in areas such as nuclear proliferation, amid worries over North Korea and Iran.

They agreed to continue working closely toward a nuclear-free world, according to the Foreign Ministry.

The two men later toured the museum, which documents the horror of the atomic bombing, before leaving behind paper cranes they had folded, the ministry said. 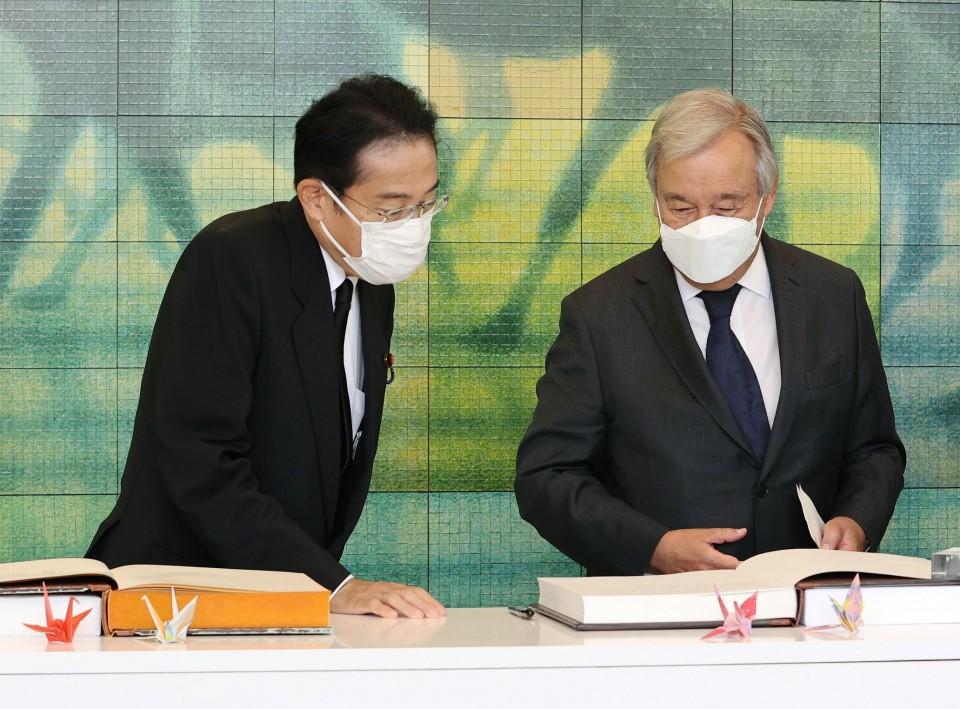 Guterres arrived in Japan on Friday for a four-day visit.

The U.N. chief had strongly desired to visit Hiroshima, the ministry said, adding he had hoped to attend last year's ceremony but could not do so because of the coronavirus pandemic.

He is scheduled to meet with Foreign Minister Yoshimasa Hayashi and have an audience with Emperor Naruhito in Tokyo on Monday before leaving for Mongolia.

In 2018, the former Portuguese prime minister became the first U.N. secretary general to attend an annual memorial ceremony in Nagasaki, which suffered a U.S. atomic bombing three days after Hiroshima in 1945.